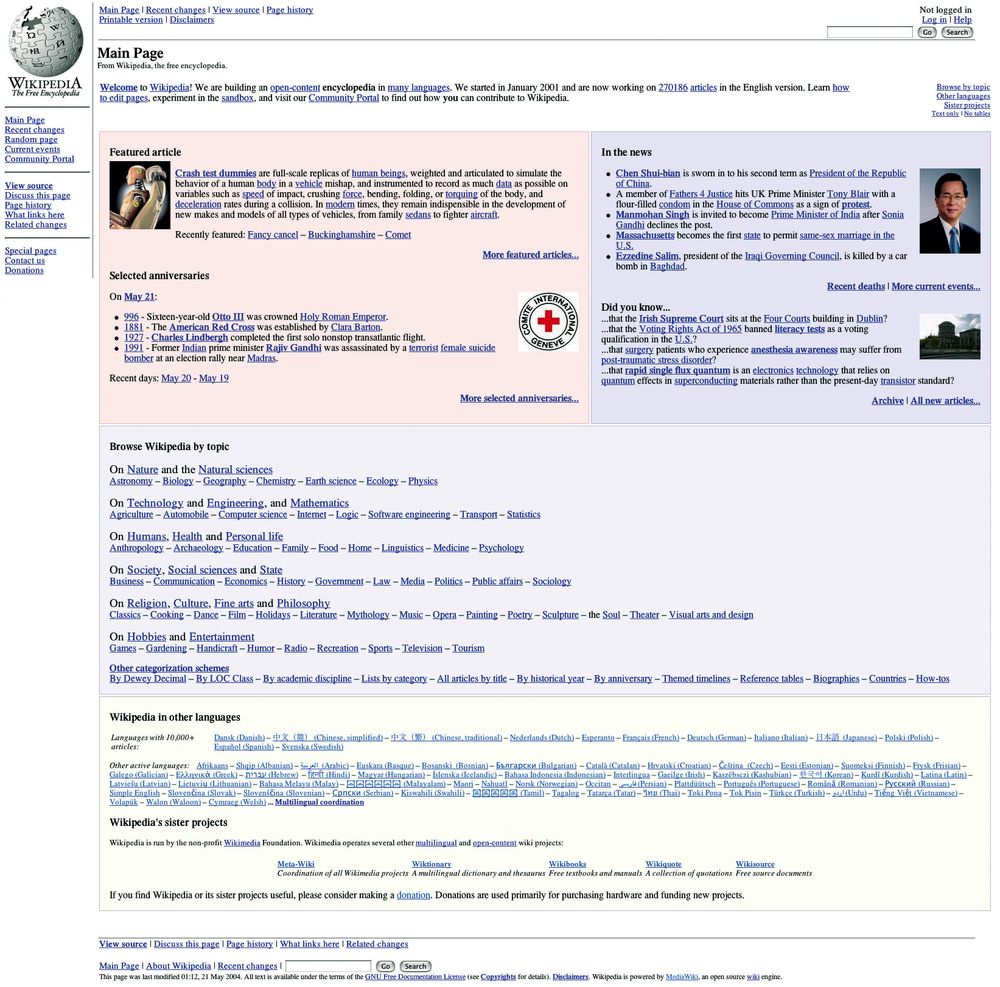 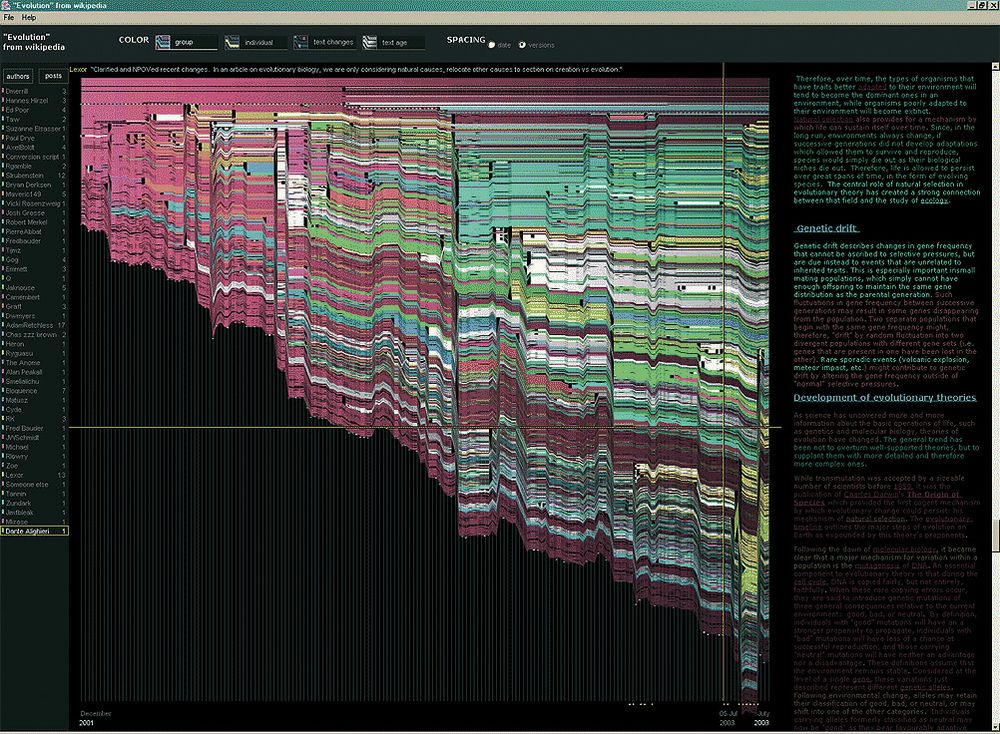 Original: PR_2004_wikipedia_008_o.jpg | 1002 * 736px | 273.6 KB
Wikipedia is a copyleft encyclopedia that is collaboratively developed using wiki software. Wikipedia is managed and operated by the nonprofit Wikimedia Foundation, founded and led by Jimmy Wales. In addition to standard encyclopaedic knowledge, Wikipedia includes information more often associated with almanacs and gazetteers, as well as coverage of current events. The content of Wikipedia is entirely created by its users. No single person owns the content; no article is ever finished. The license known as the GFDL is intended to ensure that everyone who can accept that license has the right to use and improve the article.

Wikipedia is free content, meaning that it may be freely used, freely edited, and is free to copy and redistribute. As such, Wikipedia is subject to some unique hardships that do not exist in traditional encyclopedias. It has self-healing systems in place to deal with these challenges, and even a page designed to explain these systems.

Wikipedia began as an English language project on January 15, 2001, and soon gained its first other language, French, on March 23, 2001. There has since been a great deal of effort to make it multilingual, and as of May 2004 it contains over 270,000 articles in English and over 500,000 in more than 50 other languages combined.

The idea of collecting all of the world’s knowledge within arm’s reach under a single roof goes back to the ancient Library of Alexandria and Pergamon. The modern idea of the general purpose widely distributed printed encyclopedia goes back to just a little before Denis Diderot and the 18th century encyclopedists.

The idea of using automated machinery beyond the printing press to build a more useful encyclopedia can be traced to H. G. Wells’s short story of a World Brain (1937) and Vannevar Bush’s future vision of the microfilm based Memex, in As We May Think (1945). An important milestone along this path is also Ted Nelson’s Project Xanadu (1960).

With the development of the Internet, many people attempted to develop online encyclopedia projects. Free software exponent Richard Stallman articulated the usefulness of a “Free Universal Encyclopedia and Learning Resource” in 1999. He described Wikipedia’s formation as “exciting news,” and his Free Software Foundation encourages people “to visit and contribute to the site.”

There are three essential characteristics of the Wikipedia project, which together define its niche on the World Wide Web:

It is, or aims to become, primarily an encyclopedia.
It is a wiki, in that (with a few exceptions) it can be edited by anyone.
It is open content, and uses the copyleft GNU Free Documentation License.

One pertinent issue on Wikipedia is “vandalism”: silly or offensive edits to its encyclopedia articles. For example, Sarah Lane, presenter of “Sarah’s Blog Report,” part of The Screen Savers TV program on TechTV, “vandalised” the Wikipedia page on monkeypox live on air—leading to a surge of vandalism on that page by viewers of the TV show. Lane later wrote that “Although this excites me in its ease and simplicity, it’s a little frightening. I mean, what if I had instead written ‘My boss is a big fat **** and his phone number is ****’? Sure, somebody would delete it, but this calls for some seriously dedicated moderators.”

However, according to a Wall Street Journal article from February 2004, researchers have found that instances of vandalism at Wikipedia are often quickly resolved: Recent research by a team from IBM found that most vandalism suffered by Wikipedia had been repaired within five minutes. That’s fast: “We were surprised at how often we found vandalism, and then surprised again at how fast it was fixed,” says Martin Wattenberg, a researcher in the IBM TJ Watson Research Center, in Cambridge, Mass.

Policies
Wikipedia’s participants (“Wikipedians”) commonly follow, and enforce, a few basic policies. First, because there is a huge variety of participants of all ideologies, and from around the world, Wikipedia is committed to making its articles as unbiased as possible. However there has been criticism that the systemic bias of the participants can color the neutrality of an article. The aim is not to write articles from a single objective point of view—this is a common misunderstanding of the policy—but rather, to fairly present all views on an issue, attributed to their adherents in a neutral way. Of course, which views need to be attributed is a significant issue.

Second, there are a number of article naming conventions; for example, when several names exist, the most common one in the respective Wikipedia language is to be used.

Third, Wikipedians use “talk” pages or other “out of band” methods to discuss changes to articles, rather than discussing the changes within the articles themselves. This marked a break from other wikis of the time, such as Ward Cunningham’s WikiWiki.

Fourth, there are certain kinds of entries which are generally discouraged, because they do not, strictly speaking, constitute encyclopedia articles. For example, Wikipedia entries are not dictionary definitions, and the wholesale addition of source material such as the text of laws and speeches is generally frowned upon.

Fifth, there are a variety of sometimes contradictory rules, guidelines, policies, and common practices that have been proposed and which have varying amounts of support within the Wikipedia community. When these proposed rules are violated, it is decided on a case by case basis among the Wikipedia community whether they should be more strictly enforced or not.

Personnel
Wikipedia has been edited by thousands of people. Wikipedia calls people who edit it Wikipedians. Jimmy Wales founded Wikipedia (and a prior project, Nupedia) when he hired Larry Sanger, the manager of the Nupedia project. Today, all those who work on Wikipedia are volunteers.

The particular version of wiki software that originally ran Wikipedia was UseModWiki, written by Clifford Adams (“Phase I”). At first it required CamelCase for links; soon it was also possible to use the current linking method with double brackets. In January 2002, Wikipedia began running on PHP wiki software, which used an underlying MySQL database, added many features (and abolished the behavior of CamelCase words automatically becoming links), and was specifically written for the Wikipedia project by Magnus Manske (“Phase II”). After a while, the site started to slow down to an extent where editing became almost impossible; several rounds of modifications to the software provided only temporary relief.

Then Lee Daniel Crocker rewrote the software from scratch; the new version, a major improvement, has been running since July 2002; this “Phase III” software is now also called MediaWiki. Brion Vibber has since taken the lead in fixing bugs and tuning the database for performance. Disputes within the Wikipedia community are handled through a process of discussion to find a consensus solution, followed at times by voting when no other means of consensus-finding can be found. Disputes between users are heard by an arbitration committee only if a softer mediation committee is unable to resolve the problem.

Some of the most famous and important people within the community are those who work to find solutions to conflict.

In late 2003, server outages had become a serious problem to Wikipedia contributors. Many of them reported they had difficulty editing articles by getting time-outs and severe slowness. This was due to congestion on the single server that was running all the Wikipedias at the time.

The project now runs on fourteen dedicated servers, located in Florida. The new configuration currently includes two database servers and nine web servers, which serve up pages as requested, performing page rendering for all the Wikipedias. To increase speed further, rendered pages for anonymous users are cached in a filesystem until rendered invalid, allowing page rendering to be skipped entirely for most common page accesses. Cached requests are served by two Squid servers; the new servers are linked via two file system NFS servers (one primary and one backup—the primary NFS server is currently also the email server).