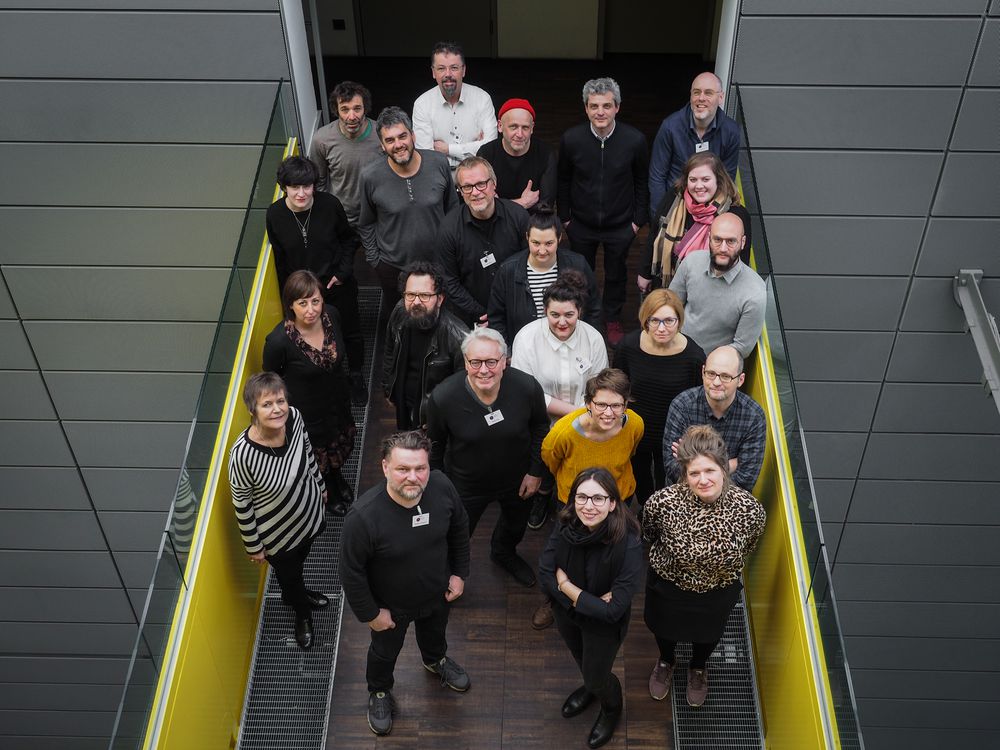 Title: European ARTificial Intelligence Lab Jury march 2019 | 4366 * 3275px | 8.5 MB | Credits: FotografIn: Hieslmair, Martin |
The residency-artist is always selected by an interdisciplinary jury. Jurors coming from the arts evaluate the submissions in an artistic way of thinking, representatives of the Ars Electronica Futurelab judge the submitted ideas in thinking on the possibilities of technical realization and beside that members of the scientific partners are assessing the projects on what is possible within the scientific work carried out at the different scientific facilities.

Antoine Conjard (FR) Antoine Conjard holds the position of Artistic Director of Hexagone Scène Nationale Arts Sciences, Meylan (France) since 2001, a theatre of 600 seats dedicated to performing arts. He is the instigator of Atelier Arts Sciences – joint research platform shared by Hexagone and CEA research centre (since 2007, Grenoble, France) as well as of EXPERIMENTA, the Fair.

Christophe de Jaeger (BE) Art historian and curator specializing in media art and collaborative practices between art and research. I have realized projects in Belgium, the USA, Shanghai (China), and Milano (Italy). Program Manager of the department BOZAR Art & Research (Center for Fine Arts Brussels) and founder at GLUON, a platform for art, science & technology (Brussels). Christophe De Jaeger has a strong interest in S.T.E.A.M. education.

Gerfried Stocker (AT) is a media artist and telecommunications engineer. In 1991, he founded x-space, a team formed to carry out interdisciplinary projects, which went on to produce numerous installations and performances featuring elements of interaction, robotics and telecommunications. Since 1995, Gerfried Stocker has been artistic director of Ars Electronica. In 1995-96, he headed the crew of artists and technicians that developed the Ars Electronica Center’s pioneering new exhibition strategies and set up the facility’s in-house R&D department, the Ars Electronica Futurelab. He has been chiefly responsible for conceiving and implementing the series of international exhibitions that Ars Electronica has staged since 2004, and, beginning in 2005, for the planning and thematic repositioning of the new, expanded Ars Electronica Center.

Heracles Papatheodorou (GR) coordinates and co-curates public programmes on digital arts and innovation at Onassis Stegi, in Athens. As the Digital Policy & Development Coordinator, he is also responsible for managing digital transformation projects. He is a licensed architect (dipl. School of Architecture, National Technical University of Athens), and has worked for several years both as a freelancer and within startups in the fields of design, architecture and web development.

Karin Ohlenschläger (ES) Artistic director of LABoral Centro de Arte y Creación Industrial in Gijon, Spain, as well as a historian, scholar and curator who has focused on media art, science and contemporary art since 1985. She has chaired the Banquet Foundation of Art, Science, Technology and Society (1998-2006) and the Institut of Contemporary Arts in Madrid (2011-2012), and co-founded and co-directed MediaLab Madrid (2002/2006). She also has headed other international initiatives, including the Cibervisión International Festival of Art, Science and Technology at Centro Cultural Conde Duque, CCCD (2002) and at Rey Juan Carlos University in Madrid (1999).

Lucas Evers (NL) joined Waag in April 2007 and is currently leading Waag’s Wetlab. He is actively involved in several projects that concern the interactions between the arts and sciences, arts and ethics and the arts in a contemporary makers culture. The Wetlab is a laboratory where arts, design, sciences, engineering and the public meet to research biotechnologies and their impact on society and ecology. Lucas Evers is trained in fine arts and teaching at Maastricht Academy of Fine Arts and Design and he studied politics at the University of Amsterdam. He worked De Balie Center for Culture and Politics and Melkweg in Amsterdam, programming cinema, new media and politics.

Mariam Natroshvili (GE) is a Tbilisi based artist, conceptual writer and exhibition maker. The main focus of her work is finding right words for right places and collecting forgotten stories. Exhibitions and interventions organised by Mariam Natroshvili include: Illegal Kosmonavtika, Dictionary of foreign words, Who will still the roaring of the sea?, etc. She is a curator of visual department at SOU festival since 2017 and founder of Museum of Contemporary Art Tbilisi – museum on call.

Mariano Salvador (ES) is a journalist, audiovisual and new media researcher and filmmaker. He received a Bachelor of Arts in Journalism from the University of Navarra (Pamplona, Spain) and completed his studies at the School of Cinema and Audiovisual media of Madrid. Since mid-2016 he is Manager Director of the Zaragoza City of knowledge Foundation, a nonprofit private institution which aims for spreading knowledge society innovations among citizens in order to achieve a more open, inclusive, democratic and cooperative world.

Mariano Sardón (AR) studied physics at the University of Buenos Aires and is currently Professor and Head of the Electronic Art Program at the Universidad Nacional de Tres de Febrero. Buenos Aires, Argentina. He received the Konex Prize in the Fine Arts Category 2012 of the Konex Foundation, Buenos Aires, the Experimentation Prize in Non-traditional supports and video 2008 of the Argentine Association of Art Critics.

Mariano Sigman (AR) was born in Argentina and grew up in Barcelona, Spain. He studied physics at the University of Buenos Aires; did his PhD in neuroscience in New York, and a postdoc at College de France, Paris. He is the director of the Neuroscience Laboratory at Di Tella University (Buenos Aires), an interdisciplinary group integrated by physicists, psychologists, biologists, engineers, educational scientists, linguists, mathematicians, artists and computer scientists.

Mikael Fock (DK) CEO and Artistic Director at The Culture Yard, Denmark, which provides over 1.000 annual cultural events, three festivals including the international art, science and technology festival CLICK. Since 2012, The Culture Yard has produced and presented numerous international productions in the format 4D Box that has a unique interactive stage in real 3D. Mikael Fock has a background as director of performing arts in theater, film and mix media and has been working constantly with new media technologies and hybrid arts for many years. He has been a member of the National Danish Art Counsel from January 2014 – 2018.

Sandra Sajovic (SI) has been working as a curator and producer in Kapelica Gallery, an art space for contemporary investigative art, based in Ljubljana since 1995. She has been involved in the program development of BioTehna, a platform for artistic research of living systems, adjacent to the gallery within the Kersnikova Institute. Her extensive experiences as a curator and producer led to some of the most prominent national and international artistic manifestations’ collaborations.

Slobodan Coba Jovanovic (SB) holds a Masters degree in Arts from the Universita Internazionale dell Arte, Firenze, Italia, Accedemia Delle Belle Arti – Firenze, Italia. Since 2013 he is the Head of Design at the Center for the Promotion of Science. He is the Creative Director of Coba&Associates branding. He has worked on the corporate identity for big companies such as Imlek, Turistical Organization of Serbia, Doncafe, EuroAxix bank, Vineyard Tikves, Philip Morris International, etc. He has worked in the Packaging and Advertising design for Calsberg, Adore, Valleta, Smirnoff vodka, Baileys, Actavis, etc.