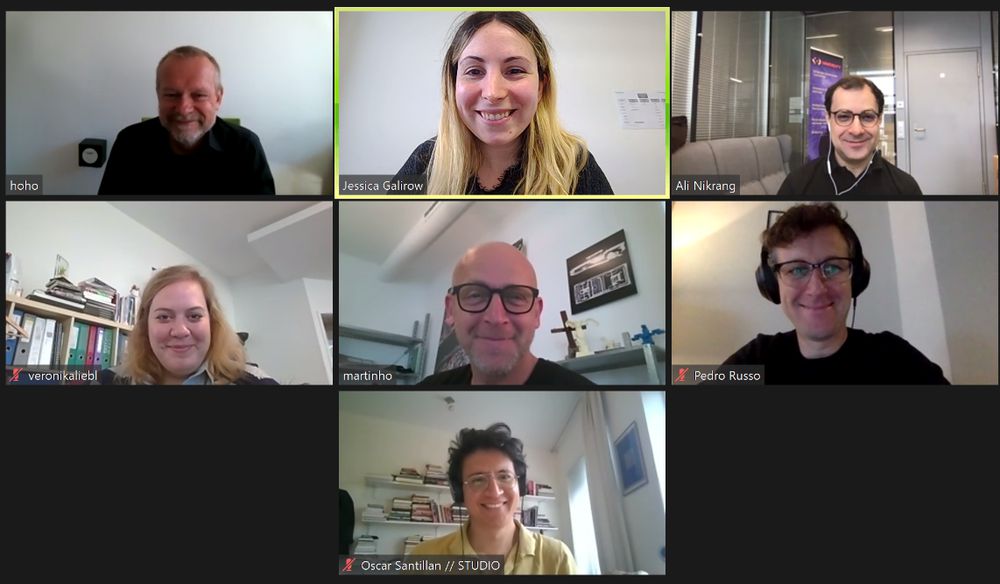 Title: AI Lab Jury 2020/1 - Leiden Observatory | 1142 * 667px | 996.8 KB | Credits: Ars Electronica
The residency-artist is always selected by an interdisciplinary jury. Jurors coming from the arts evaluate the submissions in an artistic way of thinking, representatives of the Ars Electronica Futurelab judge the submitted ideas in thinking on the possibilities of technical realization and beside that members of the scientific partners are assessing the projects on what is possible within the scientific work carried out at the different scientific facilities.

Cross reference
European ARTificial Intelligence Lab
Biographies Jurymembers
Oscar Santillán (EC/NL) is an artist and cybernetician living in The Netherlands and Ecuador. His early career was deeply shaped by working within collective environments, and he continues to collaborate with scientists and other curious minds. He holds an MFA in Sculpture from Virginia Commonwealth University and has been artist-in-residence at Skowhegan (US), Jan van Eyck (NL) Ratti Foundation (IT), Delfina Foundation (UK), and Leiden Astronomical Observatory (NL). His work has been exhibited in the Yokohama Triennial 2020, Japan; MUAC Museum, Mexico; IMMA – Irish Museum of Modern Art, Ireland; Witte de With Center for Contemporary Art, Netherlands; NRW Forum Dusseldorf, Germany; FRAC ile-de-france, France; among others. He is one of the igniters setting órbitat—a platform for the encounter of art, science, and technology in Latin America— in motion.

Pedro Russo (NL) is University Professor in Astronomy & Society at Leiden University, the Netherlands. Dr. Russo was the global coordinator for the International Year of Astronomy 2009. He obtained his University degree in applied mathematics, physics and astronomy from the University of Porto, Portugal, was a research fellow at the Max Planck Institute for Solar System Research in Germany and is involved with several international organisations, like the European Astronomical Society, Europlanet, the International Astronautical Federation. His work has received several awards, such as Seeds Special Award 2009, Scientix Best Educational Resource in 2015 and 2016, Most Innovative Educational Activities in 2017 and 2018 by HundrED and 2018 Leiden University’s K.J. Cath Prize. Pedro has worked in several science and art collaborations and is currently working on a collaboration with the Nederlands Dans Theater, NDT2.