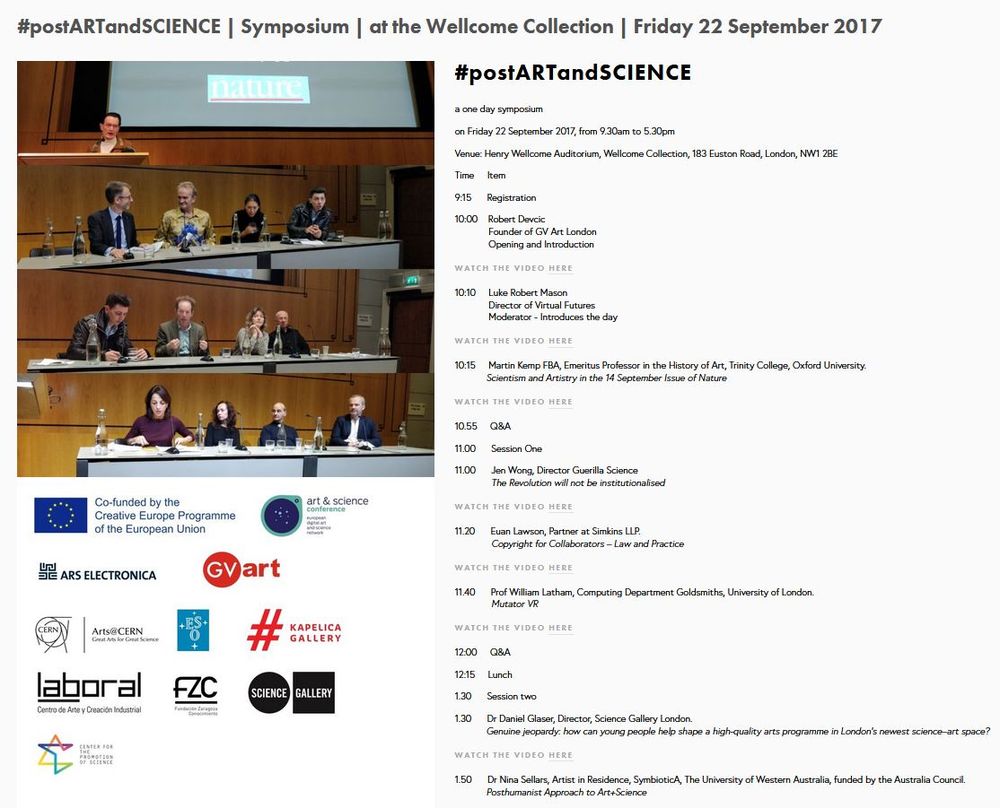 (Source: The Practice of Art and Science, p. 211)
Links
https://www.gvart.co.uk/events-1/2017/8/22/postartandscience-symposium-at-the-wellcome-collection-friday-22-september-2017


Cross reference
GV Art London
#postARTandSCIENCE
Over the last 30 years art+science has grown from a niche interest to a legitimate field of inquiry and experimentation, producing many exciting projects, interdisciplinary collaborations, and lively debates across various academic and artistic institutions. At the same time, concerns have been raised that aesthetically engaging art is all too frequently used to illuminate a scientific idea and, in this way, help scientists communicate with a wider audience. Even some of the more collaborative projects between artists and sciences maintain the distinction between the two fields, which temporarily come together in various funded projects. So, is it time to move on from art+science?
#postARTandSCIENCE has as its main theme thinking beyond art+science—especially in the sense in which this pairing is conventionally understood. Are we satisfied with the way art+science has operated to date, and, if not, what should come after it? Can art change what we understand by science? Can science itself be considered a form of art? Should the relation be extended to take in other methods and approaches, such as those associated with engineering, geography, anthropology, literature, philosophy, or media? Or does #postARTandSCIENCE call for an a-disciplinary approach?

Within that rubric, a number of questions are raised by this symposium, focusing on three key themes:

Institution
To date, art+science has been associated largely with the research foundation (e.g. Wellcome), the research center (e.g. CERN), the university, and the arts festival (ISEA, Ars Electronica). To what extent are we ready to move beyond such traditional institutional forms? For example, does the Common Room set up by Polish avant-garde artists, the Themersons, provide one possible model that could be adapted and updated for the 21st century? Could this be a way of inventing a #postARTandSCIENCE community? Should #postARTandSCIENCE be post-research foundation, post-university, and post-arts festival too?

Funding
What possible avenues for support are available for a more experimental approach to art+science that does not merely aim to use the relatively large amounts of funding that are available to science in order to support art, with the latter then being required to fulfill its part of the bargain by acting in the service of the former? What are the important differences between the ways art and science are funded, and the wider rationales as to why they are being practiced in the first place? When do they converge and when do they diverge? Are there agencies, companies and funding bodies that can support #postARTandSCIENCE? Are there any successful examples of this happening already?

The human subject
It seems that too often the “art+science” relationship has consisted of art curators and critics engaging posthumanist and anti-humanist art and science, i.e. art and science that challenges the primacy of the human as the main agent and driving force of the world, whether it concerns Artificial Intelligence and Artificial Life, cognition, robotics, genomics, or the Anthropocene—in a rather humanist way. Can we imagine a posthumanist approach to art and science? What forms might that take? What media would it use to present its outcomes? And what kinds of ethical and political questions would be raised by this shift towards a more posthuman art+science?