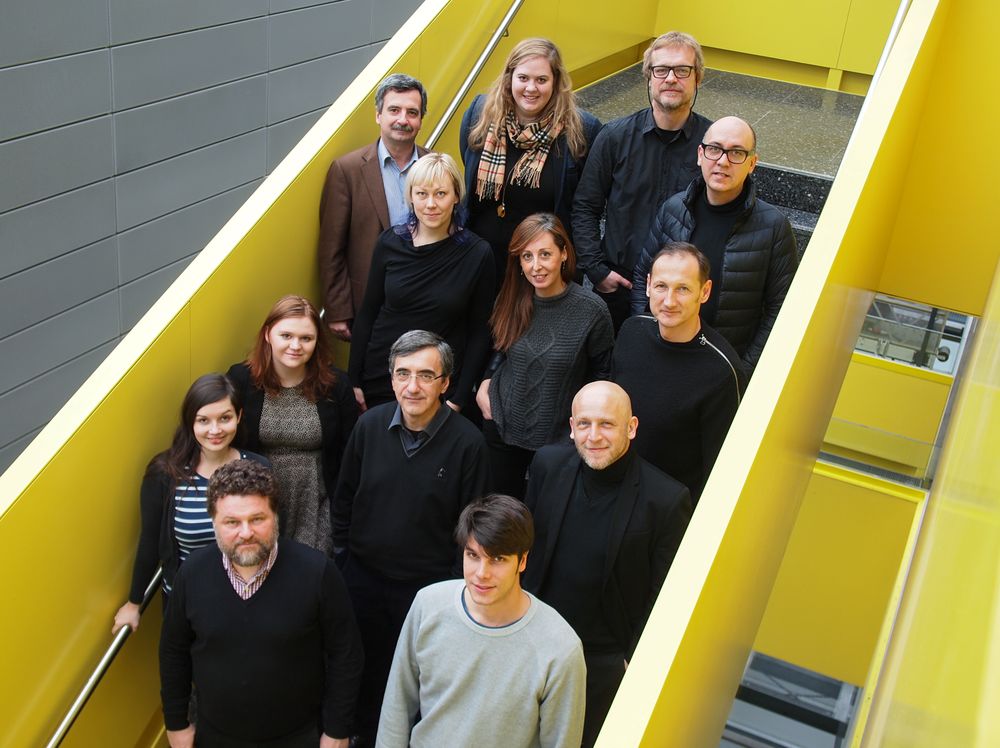 Title: art & science jury - ESO residency 2015 | 3781 * 2829px | 5.1 MB | Credits: FotografIn: Hieslmair, Martin | AEC
The residency-artist is always selected by an interdisciplinary jury representing art&science. Jurors coming from the arts evaluate the submissions in an artistic way of thinking, representatives of the Ars Electronica Futurelab judge the submitted ideas in thinking on the possibilities of technical realization and beside that members of the scientific partners are assessing the projects on what is possible within the scientific work carried out at the different scientific facilities.

Gerfried Stocker is a media artist and telecommunications engineer. In 1991, he founded x-space, a team formed to carry out interdisciplinary projects, which went on to produce numerous installations and performances featuring elements of interaction, robotics and telecommunications. Since 1995, Gerfried Stocker has been artistic director of Ars Electronica. In 1995-96, he headed the crew of artists and technicians that developed the Ars Electronica Center’s pioneering new exhibition strategies and set up the facility’s in-house R&D department, the Ars Electronica Futurelab. He has been chiefly responsible for conceiving and implementing the series of international exhibitions that Ars Electronica has staged since 2004, and, beginning in 2005, for the planning and thematic repositioning of the new, expanded Ars Electronica Center.

Horst Hörtner is a media artist and researcher. He is an expert in the design of human-computer interaction and holds several patents in this field. Hörtner was a founding member of the Ars Electronica Futurelab in 1996 and since then he has been the director of this atelier/laboratory. He started work in the field of media art in the 1980s and co-founded the ‘media-art group x-space’ in Graz, Austria, in 1990. Horst Hörtner works at the nexus of art and science and gives lectures and talks at numerous international conferences and universities.


Slobodan Coba Jovanovic – Center for the promotion of science

Slobodan Coba Jovanovic holds a Masters degree in Arts from the Universita Internazionale dell Arte, Firenze, Italia, Accedemia Delle Belle Arti – Firenze, Italia. Since 2013 he is the Head of Design at the Center for the Promotion of Science. He is the Creative Director of Coba&Associates branding. He has worked on the corporate identity for big companies such as Imlek, Turistical Organization of Serbia, Doncafe, EuroAxix bank, Vineyard Tikves, Philip Morris International, etc. He has worked in the Packaging and Advertising design for Calsberg, Adore, Valleta, Smirnoff vodka, Baileys, Actavis, etc. Extensive work in reports, brochures, art direction and design in magazines and newspapers, retail, web sites, place branding. He has written two books on branding.

Richard Kitta is an assistant professor of New Media Studio at the Faculty of Arts TU Košice as well as a multimedia artist and artistic manager. Since 2009 he is editor-in-chief of ENTER an interdisciplinary magazine. Since 2012 he is an artistic director of DIG gallery – a space for media arts presentations and alternative artistic research. Richard Kitt is mainly interested in the creation of interactive objects, screenings and environments as well as being focused on the possibilities of contemporary multimedia arts.

Fernando Comerón obtained his PhD in Physics at the University of Barcelona in 1992. He has been carrying out research in astrophysics at the University of Barcelona (Spain), the Observatory of Paris Meudon (France), the University of Arizona (USA) and, since 1995, at the European Southern Observatory (ESO), the leading European international organization for observational astronomy. In 2013 he was appointed as head of the ESO Representation in Chile, the country where ESO observatories are located. Previous to this he was involved in observatory operations for over 15 years and was head of the ESO Data Management and Operations Division, located in Garching near Munich, Germany, before moving to Chile. His research interests are in star formation, galactic structure, and young stellar objects at both high and low masses, fields in which he has published over 80 papers in international refereed journals.

Founder and Director of GV Art gallery, London in 2005. Working to promote meaningful dialogues between artists and scientists. Robert enjoys organising and curating exhibitions and events and generally the bringing of people together to discuss the questions that are raised by the dialogues and interactions between art and science. Robert is the Designated Individual for GV Art’s Human Tissue Authority Licence for Public Display which enables GV Art occasionally to generate conversations about displaying human remains in a cultural context, around the themes of dignity, consent, ethics, aesthetics and donation.

The Art Director of the Kapelica Gallery graduated from the Faculty of Architecture in Ljubljana. Since 1995 he has been developing mission and program direction of Kapelica Gallery, that is characterized by explicitness and politics and devotion to the criteria of contemporary art research which he also encourages and promotes with special events in Slovenia and internationally. In 2003 he was the Commissioner of the Slovenian Pavilion at the 50th Venice Biennale. In 2006 he curated U3 – 5th Triennial of Contemporary Slovenian Art in Modern Art Gallery in Ljubljana. Between 2006 and 2010 he was leading the art project Cosinus in Brussels, in 2008 he curated the project Featured Art Scene: Ecology of Techno Mind at Ars Electronica in Linz and in 2009 a large overview exhibition Arzenal Depo 2K9 in Viba studio in Ljubljana. He was mentoring Designing Life group at Bienale of Industrial Design Ljubljana and was a curator for Slovenian pavilion at Venice Biennial for architecture in 2014.

Law graduate from the Universidad Complutense de Madrid with postgraduate studies in European Affairs and Cultural Institutions Management. She trained as broker at Barry Rogliano Salles, Paris and as risk analyst in Barclays Bank’s International Risk Management Department in London. After working in Paris and London, she returned to Madrid to take up the position of Coordinator of the International Fashion Week and the Convention Centre of IFEMA, Madrid Trade Fair Centre. Two years later she is appointed Deputy Director of ARCO, the International Contemporary Art Fair of Madrid, Spain. In August 2006, almost a year before its official opening, started working with the founding management in launching LABoral as its General Manager and as its Head of Public Programmes. In September 2011 she is appointed Managing Director of LABoral.

Diane Mc Sweeney is the Educational and European Projects Coordinator in Science Gallery Dublin. Diane holds a BA in Communication Studies, majoring in radio production, from Dublin City University. Her experience in broadcasting from Newstalk fm lead her to make her first documentary in 2014. She joined the gallery in 2012, working initially as a mediator, she now works with the education team in the gallery and is responsible for coordinating research projects, along with education and outreach for Science Gallery Dublin.

José Carlos Arnal is managing director of the Zaragoza City of Knowledge Foundation. After working as a business journalist for over 20 years in different regional media and as a technical advisor between 2003 and 2011 to the Mayor of Zaragoza Juan-Alberto Belloch, my professional interest have increasingly been focused on the innovation processes and the impact of ICT on the urban development. Speaker and participant in many national and international conferences and workshops on urban innovation. I had a Degree in Journalism by the Universidad Autonoma de Barcelona and the Advanced Management Program by IE Business School. Author of two books on the culture of entrepreneurship and startup.

Fermin Serrano Sanz is researcher at the Institute for Biocomputation and Complex Systems Physics of the University ofZaragoza, and executive director of the Ibercivis Foundation. He deploys participatory projects for experimental data gathering, promoting the public engagement and the swift of scientific culture towards digital, open and inclusive scenarios. He explores artistic approaches to change the face of research and to foster the collective intelligence for solving global social challenges.