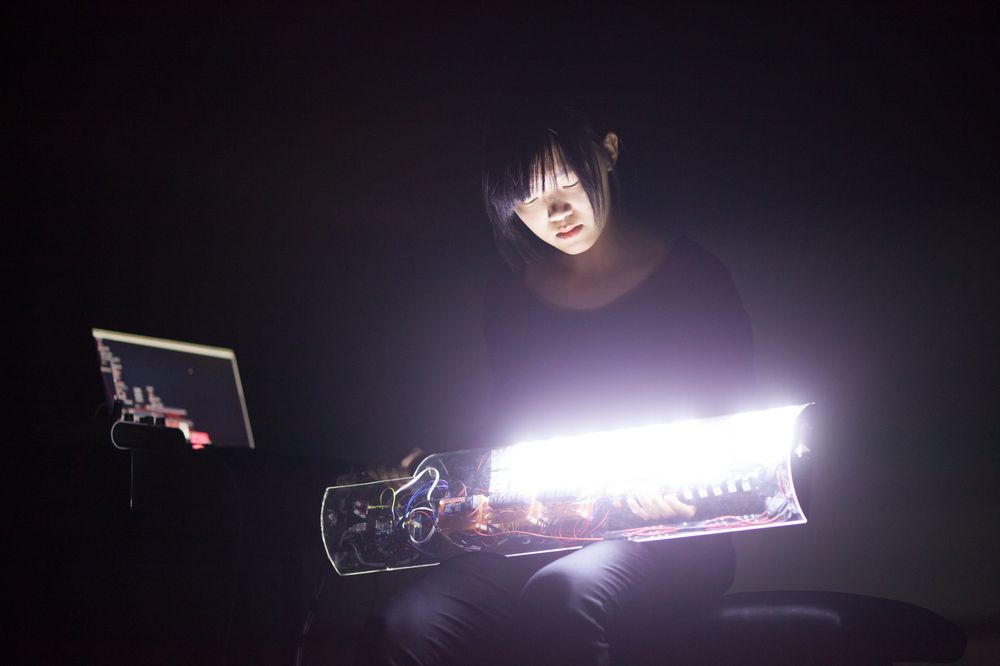 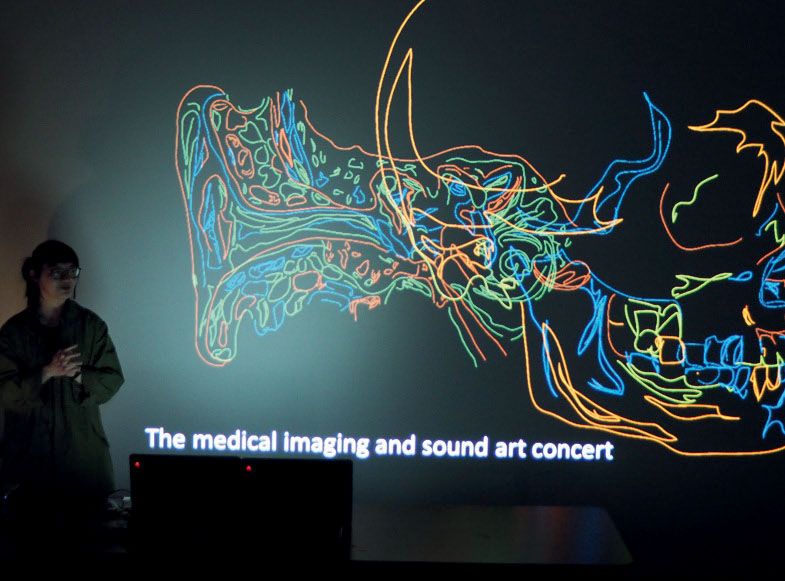 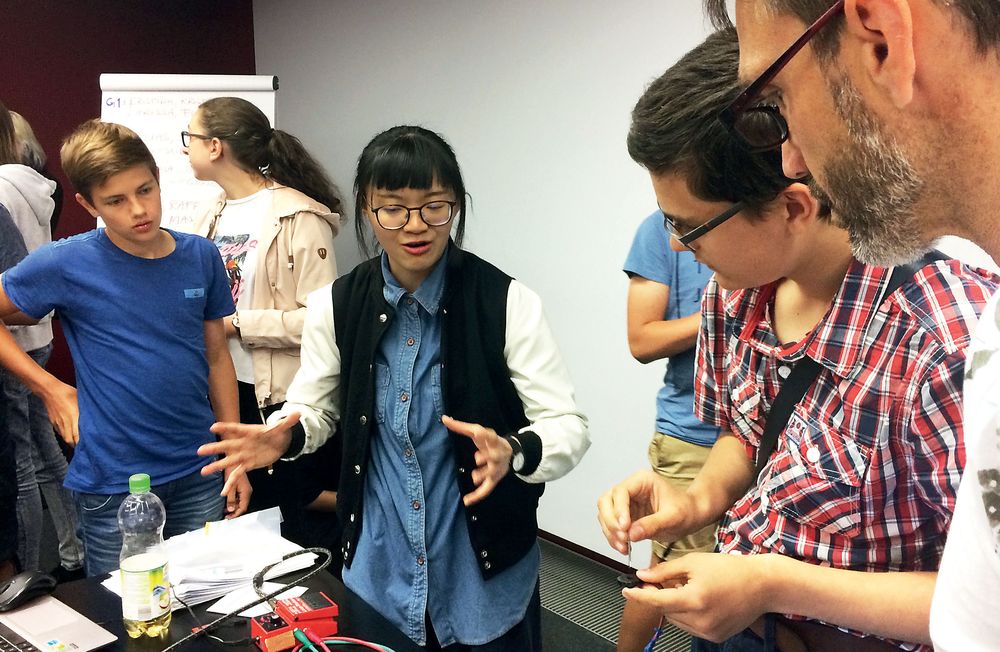 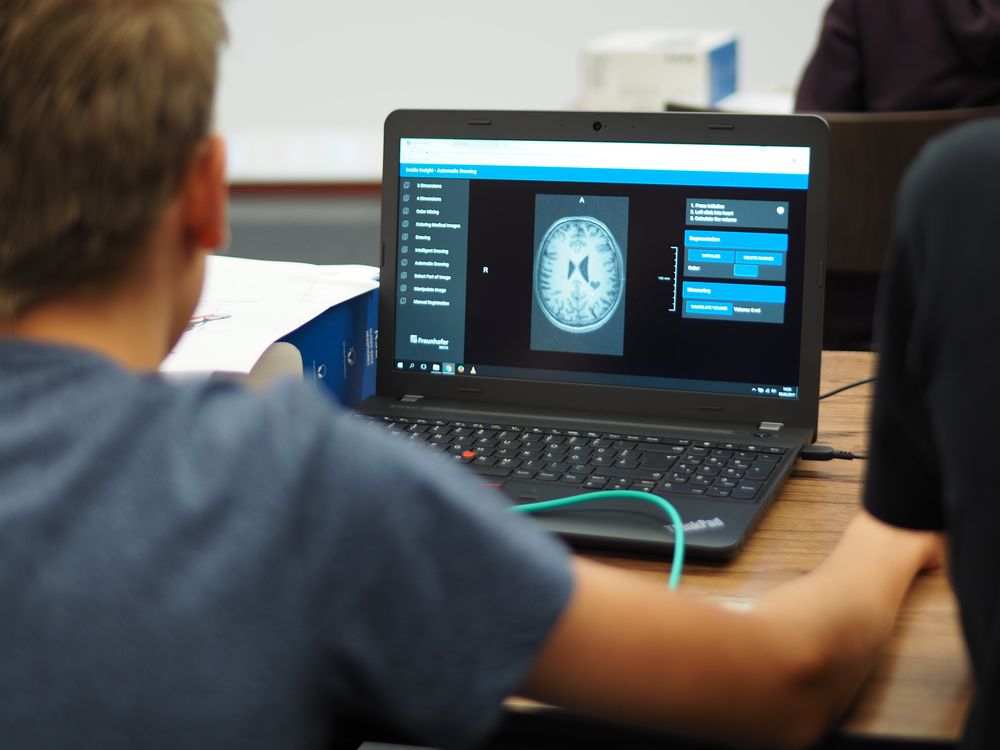 The Fraunhofer Institute for Medical Image Computing MEVIS has established an exciting artist-in-residency program that focuses on links between art and science. It is also integrating pupils into this experiment. Educators have been aware of the need to promote the STEM subjects Science, Technology, Engineering, and Mathematics for decades now, and measures have been prescribed for elementary school classroom instruction in order to ensure an early start and pave the way to an innovative society.
In the meantime, the acronym has acquired an additional letter. The “A” that now makes STEAM stands for Arts. Accordingly, Fraunhofer MEVIS has launched STEAM Imaging, which gives an artist the opportunity to spend a residency of several weeks working closely together with staff researchers at Fraunhofer MEVIS in Bremen, Germany, and co-developed and held a STEAM workshop for pupils. Then, she spent several weeks at Ars Electronica, Linz, which hosted another STEAM workshop. The artistic outcome of these encounters was presented at Ars Electronica Festival, September 2017 in Linz within the framework of the European Digital Art and Science Network.

Yen Tzu Chang (TW), the recipient of the residency STEAM Imaging, jointly hosted by Fraunhofer Institute for Medical Image Computing (MEVIS) and Ars Electronica, had the unique opportunity to work closely together with the Institute’s research staff. The Taiwanese media artist, whose previous works have included experimental sound performances, specializes in creating customized electronic instruments. Yen Tzu Chang also agreed, together with the scientists, to lead workshops for pupils in the 7th to 9th grades in Bremen and Linz in cooperation with the International Fraunhofer Talent School Bremen in March and June 2017. Following her residency, the outcome of this encounter of art and science in the field of medical imaging, Whose scalpel, was featured at Ars Electronica Festival ARTIFICIAL INTELLIGENCE – The Other I in September 2017.
https://www.aec.at/artandscience/en/artists/yen-tzu-chang


Cross reference
Yen Tzu Chang, Fraunhofer MEVIS, Ars Electronica
Biography
Yen Tzu Chang (TW) is a Taiwanese media artist who has lived and studied in Linz, Austria since 2014. She has a BA from the new media art department at Taipei National University of Art. Since 2011, she has been working in various fields, including interdisciplinary art and experimental performances based on sound installation. Her early works were audio-visual and installation mixed with video art. One kind of language… was like a science video about an incredibly long millipede walking through two screens. She gradually became interested in making installations, which combine her experience on stage. She began to develop her own electronic instruments. The Time Travel and Self-luminous series are the most successful light installations in her art career.
Credits STEAM Imaging
The STEAM Imaging project was originally developed by Fraunhofer MEVIS during 2016 in collaboration with SPACE (London).
Yen Tzu Chang: Whose scalpel
Whose scalpel is a sound performance combined with visual and 3D printed installation, realized with an application framework for medical image processing. Mixing several methods from art and science, it is an imagination of the future and presents the issues of the relationship between human and machine during heart surgery. The concept is developed from three different areas—the application of sound in medical science, coronary artery bypass surgery, and machine learning. The background story of the performance is based on the assumption that in the near future a surgeon works with the machine that can give advice during surgery. Sound is chosen as the media of the performance because it helps to create a scene and atmosphere. On the other hand, sound plays an important role in medicine. For instance, it is well known that the heart pumps blood through the whole human body with a regular frequency, which can be used to help diagnosis. Another famous application of sound in medicine is the stethoscope, which was invented in the 19th century for auscultation and allows listening to the internal sound of organs in the chest such as lungs and heart. Another state of the art example is the video from the Fraunhofer MEVIS YouTube channel, Auditory guidance prototype for navigated liver surgery1. The video shows that if the scalpel deviates from the correct cutting path, the device will make a different sound to notify the surgeon.

The heart as one of the most important human organs—both from the perspective of biology or symbolism in the society is the focus of the surgery. The heart is an installation, which is built according to the performer’s real heart from MRI scans, but is larger than its actual size. It is printed out by a 3D printer and surrounded by aluminum structures. To make the heart installation like a musical instrument, the inner part of it is equipped with Arduino, LED, and electronic components and the surface is covered with silicon and transparent vessels. It is designed to interact when the performer plugs in audio cables and bridges connections, similar to the method of coronary artery bypass surgery. Coronary artery bypass surgery is a type of heart surgery used for treating coronary artery disease, caused by the inner wall of arteries becoming blocked by fat. To supply enough oxygenated blood to the heart muscle, the doctor takes the blood vessels (or grafts) from the patient's leg, chest, or wrist and places it above and below the end of the blocked area so that the blood can go through the new grafts to reach the heart muscle.2 This method enables blood to flow through the new path, and it is a similar approach with operating a modular synthesizer to some extent, which is about letting the signal go through one modular to the other to produce the sound. In the heart installation, plugging in the cables, as a similar act, triggers the sound from Pure Data.

The AI is another character in the performance. It is created according to the technology trend. Since Alan Turing, an English computer scientist, submitted his article “Computing Machinery and Intelligence,”3 a new era began and the question: “Can machines think?” was raised. One large topic in artificial intelligence is machine learning, which, according to American pioneer Arthur Samuel means, “giving computers the ability to learn without being explicitly programmed”.4 The theory of it is, by designing algorithms to analyze portions of data, insights may be discovered and predictions may be made. Machine learning has been applied in many fields. In the medical field, machine learning is applied in diagnosis. According to Fraunhofer’s 2016 press publication, it can help physicians to distinguish tumors from CT and MRI scans.5

In the performance, an artistically imagined AI will be in charge of more important medical tasks such as analyzing the patient’s body condition and giving doctors suggestions with sound and visuals in future surgery. The storyline is led by the sound and the mixed video of medical images and live performance from the webcam. The goal of the performer as a surgeon during surgery is to cure the heart, which symbolizes human consciousness and faith. The AI, which is regarded as a perfect model, gives instruction to the performer. Maybe the question “If machines can reason even better than humans, will we as humans lose some abilities and not even believe ourselves anymore?” is worth thinking about since the issue is already present.