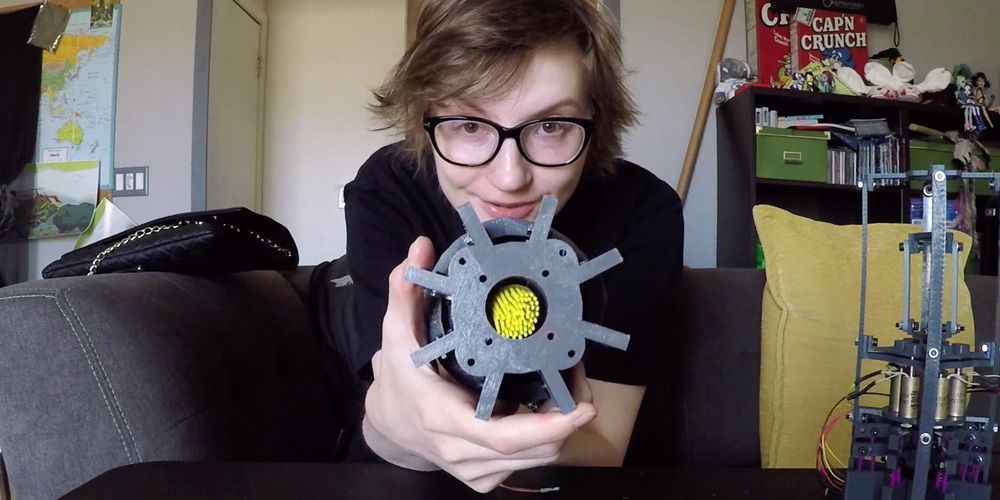 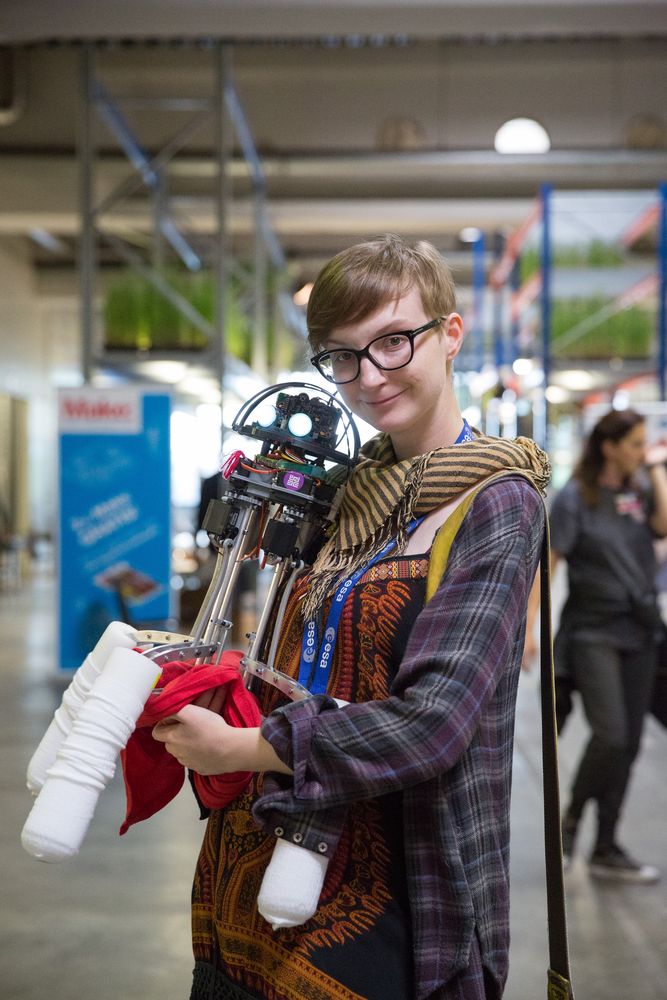 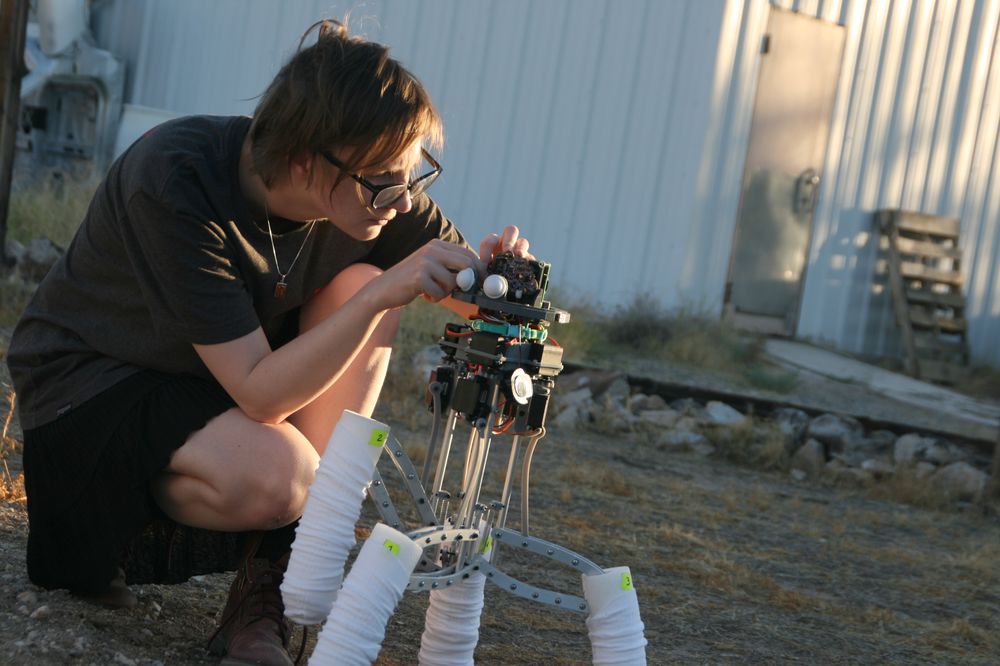 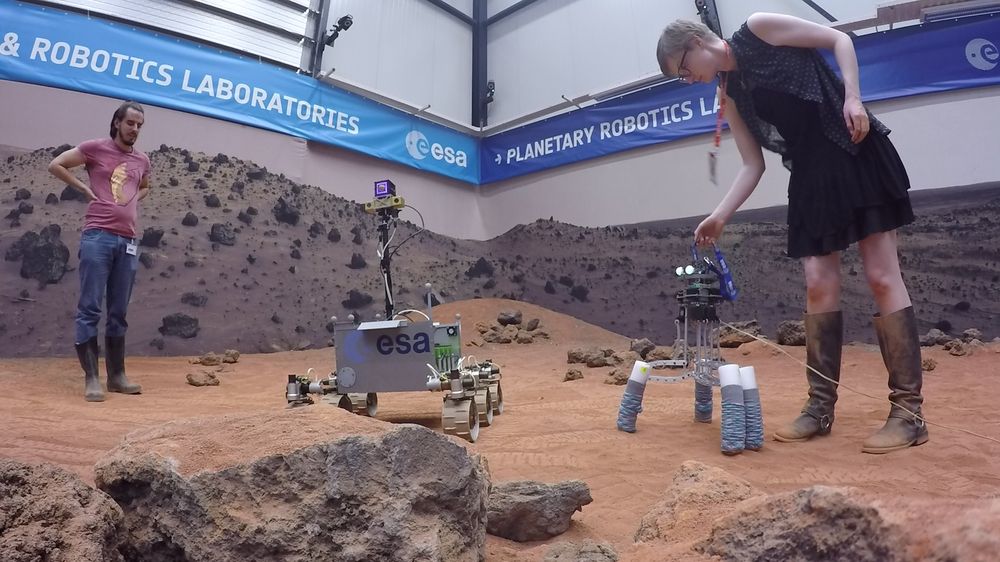 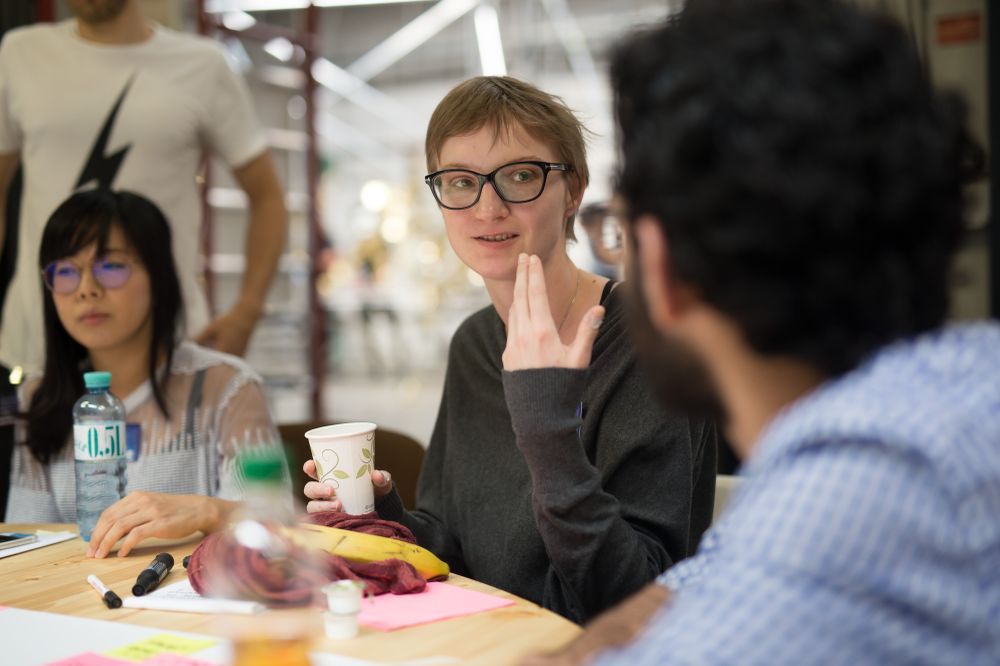 In her proposal, Sarah pondered on the possibilities of a probe that would explore another planet in the Solar System and take decisions based on creative and artistic grounds, rather than purely scientific reasoning.

“The premise of Sarah’s project is intriguing: it starts off from a seemingly standard situation in space science – a robot exploring a world other than our own – but then, as an artist, it asks what could be done differently,” adds Gerfried Stocker, artistic director of Ars Electronica.

The jury awarded Sarah an honourary mention and invited her to spend time with ESA’s planetary scientists and robotic experts in Noordwijk, and later with the Futurelab team at Ars Electronica.


Cross reference
Sarah Petkus, ESA, Ars Electronica
The Wandering Artist Project
For her proposal to send a robot with artistic skills into outer space, robotics engineer Sarah Petkus was the recipient of an Honorary Mention from the 2016 art&science@ESA. In this interview, she talks about her plans for her upcoming residency at the European Space Agency (ESA) and the Ars Electronica Futurelab, about humane robots, and the essential elements that actually constitute a robot.

The ESA’s European Space Research and Technology Centre will open its doors to Sarah Petkus in just a few days. As the successor of artist Aoife Van Linden Tol, this American woman will now have the opportunity to get a close-up look at the research being done by the ESA and to interact with scientists on site. With her suggestion to send a probe into outer space and to leave the decision-making about the creative and artistic basics up to her—and, thus, not to be made according to scientific objectives predefined by humans—was very well received by the art&science jury. “The Wandering Artist” will be exhibited at the Ars Electronica Festival, which will be held September 7-11, 2017 in Linz.

You’ve received an honorary mention at the ESA Open Call 2016 with “The Wandering Artist”. What’s the idea behind this project?

Sarah Petkus: The Wandering Artist is an exercise in robotics meant to explore machine creativity in the context of space exploration. More specifically, the project involves the development of a robotic entity equipped with mechanical and electronic aspects which allow it to manipulate its environment in a personally expressive way based on an awareness of its surroundings. My goal is to encourage reflection about the purpose and identity of space-faring technology, by granting the machine with an element of its own humanity: creative expression.

For this project, I’m engineering a robot that is capable of visually recognizing its surroundings so that it may respond to them in a variety of different ways using appendages which facilitate different forms of manipulation. The robot will have use of several mechanical modules that may sample, displace, and interface with the objects in the robot’s surroundings on an “in the moment” basis as informed by input provided by computer vision. When the robot sees a familiar object, it will call a behavior from a list of programmed routines. After a reaction is executed, the stimulus and the chosen response will be logged so that the memory of the occurrence may inform future encounters.

Everything we send into space is a sort of instrument meant to act as an extension of our senses in order to collect data in places we ourselves can’t go. Our business there is primarily observational. I wonder what sort of mark a machine could leave whose purpose is not to act as a tool. If equipped to do so, how might a machine express itself creatively in the environments where we can’t do so ourselves? Since artificial intelligence appears to be an approaching point on our horizon, I’m interested in what role creativity will play in its creation, and what form creativity will assume at the whim of a true A.I.

This June you’ll start your residency at ESTEC, ESA’s technical centre in the Netherlands. What are you going to do there?

Sarah Petkus: During my time there, I’ll have the unique opportunity to be immersed amongst the engineers and scientists who develop the work I draw inspiration from. My primary goal while I’m there is to experience and be effected by everyone I talk to, and hopefully have a meaningful impact on those who I meet as well.

The mechanisms I engineer are whimsical caricatures of the practical innovations developed for space exploration. By meeting and having discussions with the minds responsible for creating such technology, I hope to gain insight about the practical problems which motivate and shape the evolution of the physical functioning objects they design. Hearing a more personal point of view regarding their work and process, should influence the playful premises behind the functionality of the modules I’m currently developing for the Wandering Artist Project.

Additionally, I plan to document my build progress with video content for my webchannel, GravityRoad. By publicizing my personal experience at ESTEC and while working in Linz I hope to keep up a dialogue with other creators and engineers in my community so that I can be influenced by their feedback and thoughts at large.

You are focusing on creating robots with elements of humanity – how do you achieve this ambitious goal? And why do think we humans need more human robots?

Sarah Petkus: I believe that to create a robot with elements of humanity is less about making them more ‘human’ like us, and more about allowing what we create to define its own sense of self. Like the relation between parents and children, the technology we develop is informed by the best parts of ourselves. However, there is a point in time when our fostering must end and our creation must assume itself and define what it is. In regard to technology, I think this occurs when the notion of artificial intelligence enters the conversation. Since humanity is approaching that point with our innovation, perhaps it’s also necessary to meditate on what it means for us to let our child become its own person.

We are driven to make utilitarian devices because the usefulness of a machine directly correlates to its potential for monetization (or increased productivity). Where it is said that “necessity is the mother of invention” I try to eliminate practicality from the equation when I decide what the devices I create are going to do. Since the mechanisms I engineer aren’t grounded in practicality, they can’t easily be regarded as tools for use by humans. When this happens, humans are removed from the machine’s purpose, and when a machine’s purpose is no longer tied to us, it becomes primarily about itself. I think it is at this point that the machine gains a true element of humanity.

My goal is that my robots function for their own cause without regard to a human’s experience of or relation to their functionality.

Your robot Noodle Feet doesn’t like to be picked up, so it extends claws to grab hold of the ground. Where do you get your inspiration from?

Sarah Petkus: I ran across a video of JPL’s LEMUR mechanism in action a few years ago, which is a probe designed to cling to the surface of rough stone while drilling samples from within the central hub of the device. In a sense you could view the drilling process as a form of ‘tasting’. Noodle is a caricature of a space-faring probe, and after seeing the LEMUR project I was inspired to create my own mechanism for him that would similarly function to taste the surface of whatever it clings to.

The appendage I design for Noodle is able to grip onto surfaces with many tiny retractable toes, but instead of drilling into what it grips onto, I decided to have the module enact a more delicate form of tasting. Once a firm grip is obtained, the module uses a silicone tongue within the central hub to lick and salivate on whatever its attached to.

Consequently, the small hook-like toes I’ve designed for him can also be called into use in situations when Noodle senses he’s in motion, or off balance. If someone attempts to move him when he’s engaged in another activity, he may sense he is in danger of falling over and try to hold onto the ground. I think people interpret this as Noodle asserting that he doesn’t wish to be picked up. This is one of the circumstances where a practical function is read as a personal behavior. Blurring or questioning the line between the two is part of my goal as a roboticist.

What do you think are the essential elements of a robot?

Sarah Petkus: In regard to the physical, like any creature, a robot can be broken down and classified by its bodily aspects: an exterior form consisting of objects, both passive and designed for movement. The motion or kinetic nature of which is then facilitated by actuators and motors that function as the robot’s muscles. These muscles are connected by a nervous system of circuitry, which is ultimately informed by its thoughts… The thoughts are the programming telling it how to behave, existing as memories stored in a silicon brain.

As with animals, a robot’s form reflects its function. Creatures are a manifestation of what they had to do in order to survive successfully over time. Machines are designed to carry out their purpose effectively without risk of failure. The build of a successful mechanism will survive to be iterated upon… that’s also evolution.

All of the aspects I mentioned are essential elements of a robot, but what interests me about them are the similarities I highlighted. I think the more enticing question to ask is, “What are the essential elements of a human?”- and then try to solve for that with the design of a robot. The fact that humans assume identities and sculpt our individuality are among the most important elements of being human. When I think about robots and what to create, I often meditate on those qualities as a starting point.

(Source: https://www.aec.at/aeblog/en/2017/05/30/the-wandering-artist-project/)
Biography
Sarah Petkus is a kinetic artist and roboticist from Las Vegas, USA. Her area of focus is in developing mechanical systems that exhibit the behavioral nuances of living things. She is currently working in collaboration with electronic engineer, Mark Koch, as an artist group and business entity known as Robot Army. The group focuses on the creation of reactive kinetic sculptures and light installations that operate as mechanical extensions of the human body and emotional state. Sarah has a background in traditional art mediums such as painting and printmaking, and exercises her interest in these areas by writing and illustrating sequential art, as well as promoting her identity with graphic design in the form of pop imagery and propaganda. In addition to her work as a hybrid artist, Sarah documents the process and progress of her projects by producing video content and commentary for her web channel, GravityRoad.