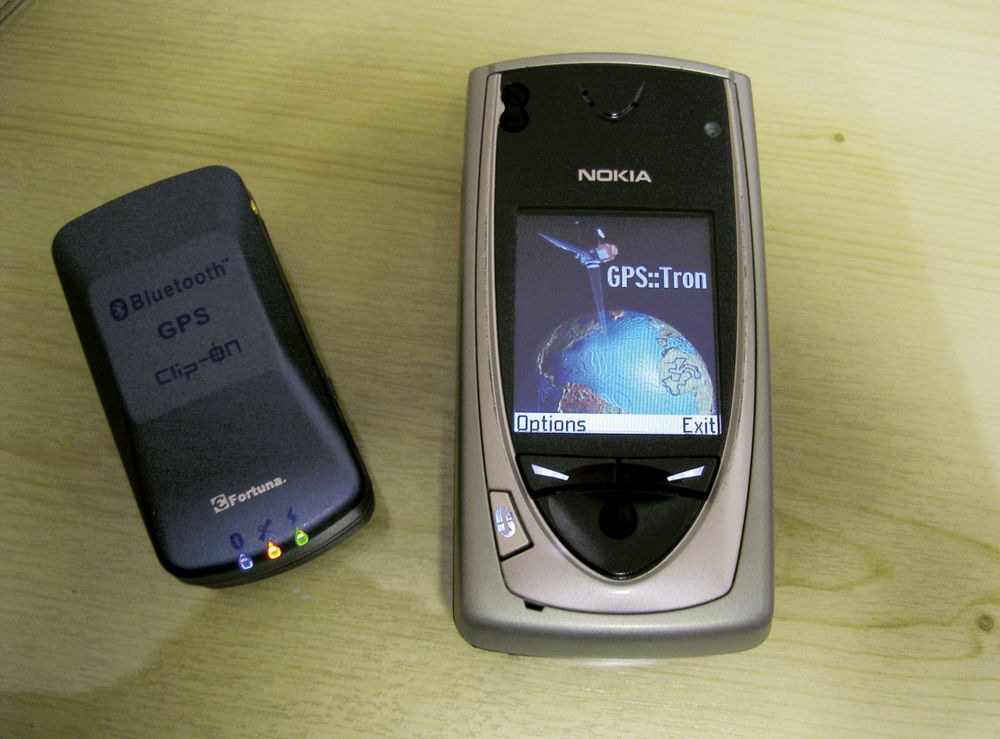 Original: PR_2004_gps_003_o.jpg | 2304 * 1704px | 985.1 KB
GPS::Tron is an adaptation of the classic game Tron for cell phones. What is new or different is that in it an attempt has been made to blend reality and virtuality in a game. In concrete terms, this means that the user can only influence the course of the game only by his position in the real world (and this is determined via GPS).

First a few words to the rules of Tron in the original game. Each player controls a line on the screen which gets longer as he moves along and can be directed in all directions. No line may cross itself or the opponent s line, if it does, that player loses. The longer the game, the more the screen fills up with lines and the more difficult it becomes to direct the line so that it neither runs into itself or another line.

This game differs from the classic version because the players do not control their lines by pressing buttons; instead the trails they leave in their wake are determined by their positions in the real world. These are tracked via GPS. Hence, when a player runs some 200 meters straight on, a line of approximately one centimeter shows up on his cell-phone display; when he turns to the right, the trail on the display also turns to the right.

Since the players of GPS::Tron must be mobile to participate, I wrote the game’s program for cell phones. GPS::Tron currently operates on Nokia 7650 / 3650 / 6600 and Siemens SX1. To make it possible to calculate the players’ positions at any moment, they must also carry GPS receivers; these then transmit their coordinates via Bluetooth to their cell phones.

GPS::Tron is intended for two players, each of whom is equipped with a cell phone and a GPS receiver. To be able to play against each other, their cell phones have to be able to communicate via Internet (using the GPRS of their mobile service provider).

The users do not need to be near each other geographically in order to play. For example, someone from Europe can play with someone from Australia, because they are virtually—on their cell-phone displays—right next to each other. There is also no need for both players to be on foot. If, e.g., one player is on in-line skates or a bike, he can preset the game for this mode since he has an advantage speed-wise, he will now have to cover a longer stretch in reality.

The game proceeds approximately like this: Player 1 starts GPS::Tron on his cell phone and goes outdoors (GPS satellite reception is necessary). As soon as the GPS receiver provides the cell phone with position data via Bluetooth, the program connects to the game server on the Internet (via the mobile service provider’s GPRS) and waits until a second player shows up. When this happens, the game begins. From this point on, the movements of the players are displayed on their cell phones as two different colored lines. Since the lines may not touch or cross each other, the game gets harder as time passes. The goal is to drive your opponent into a corner so that he can no longer extend his line without breaking the rules and losing.

Thomas Winkler, born 1984, attended a secondary school in Hartberg (Styria) and then the department for data processing and organization at a technical secondary school, the HTBL Pinkafeld (Burgenland). He has had on-the-job training in programming, web development and databank support at UPC-Telekabel, Graz; derStandard.at, Vienna; Ruprecht & Partner OEG, Vienna; and MIS AG, Vienna. Currently he is doing community service; afterwards he plans to study at a college specializing in his fields of interest.