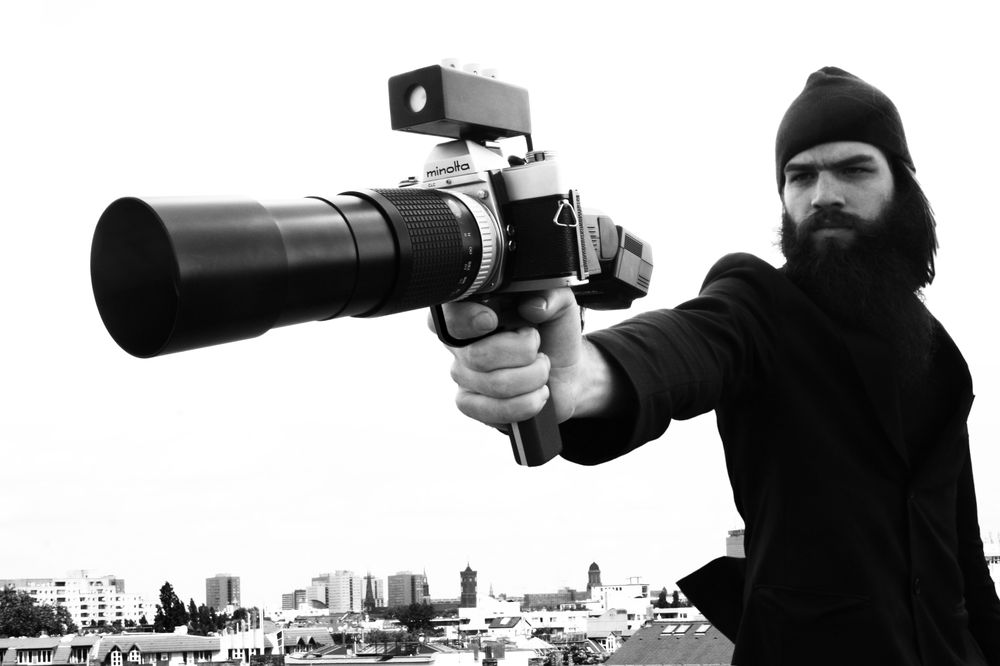 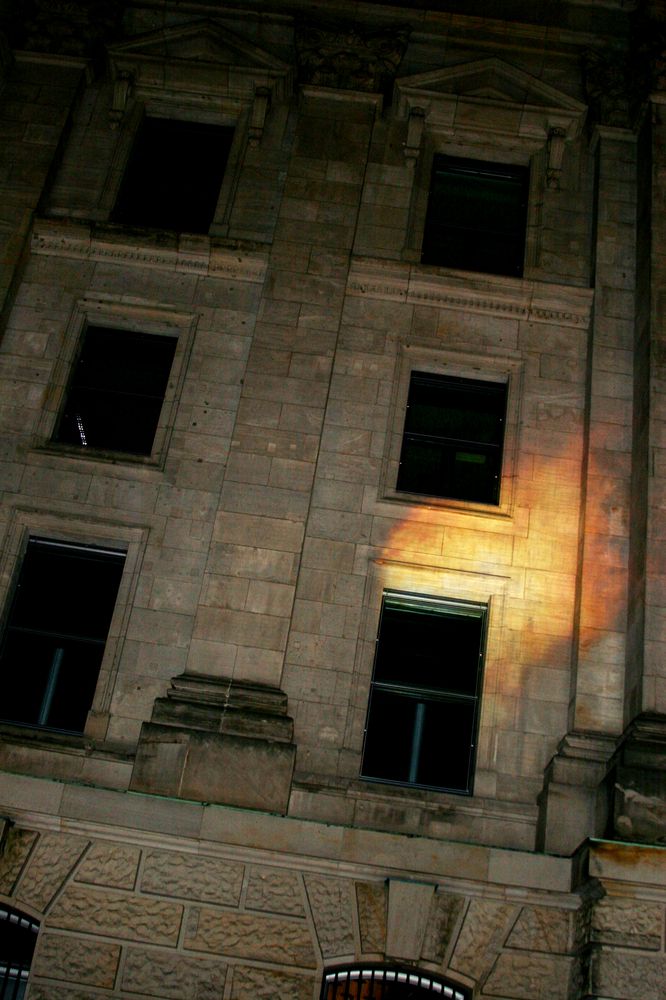 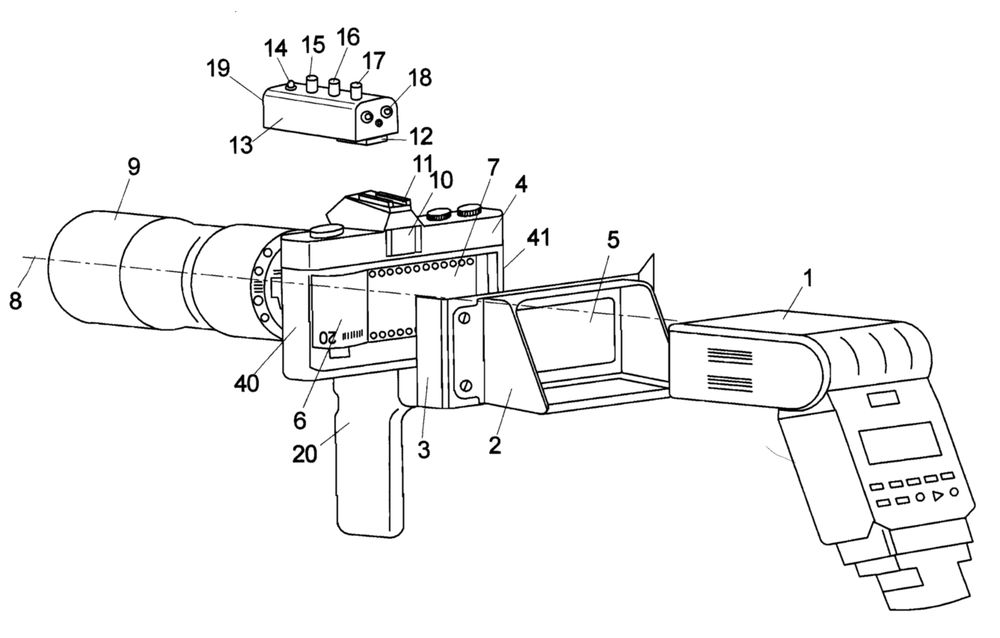 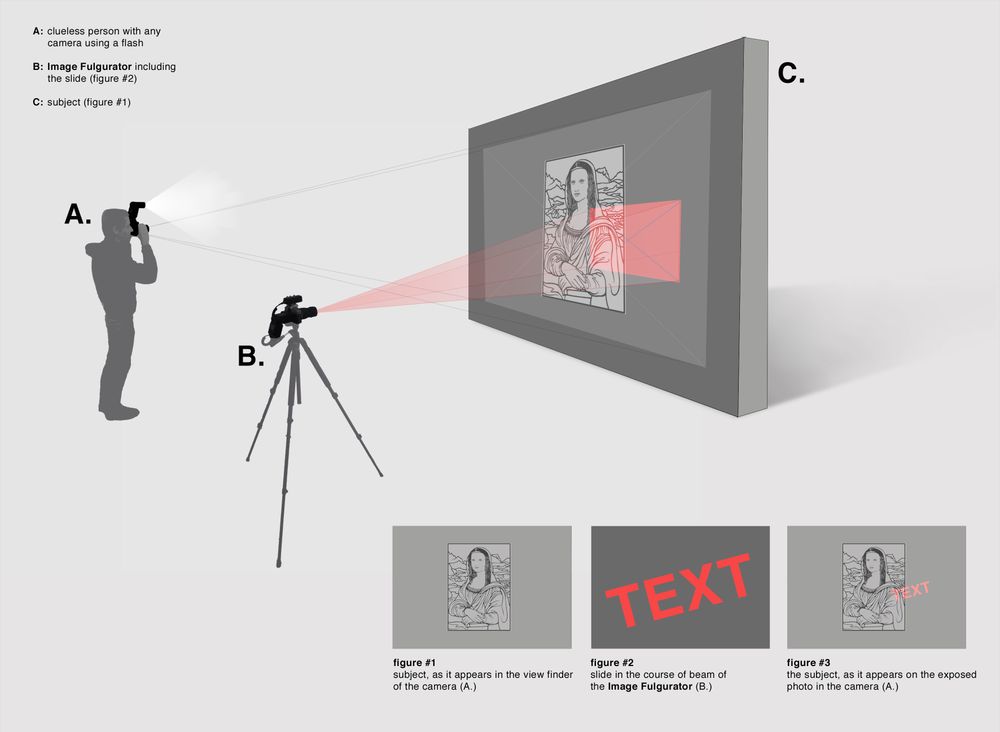 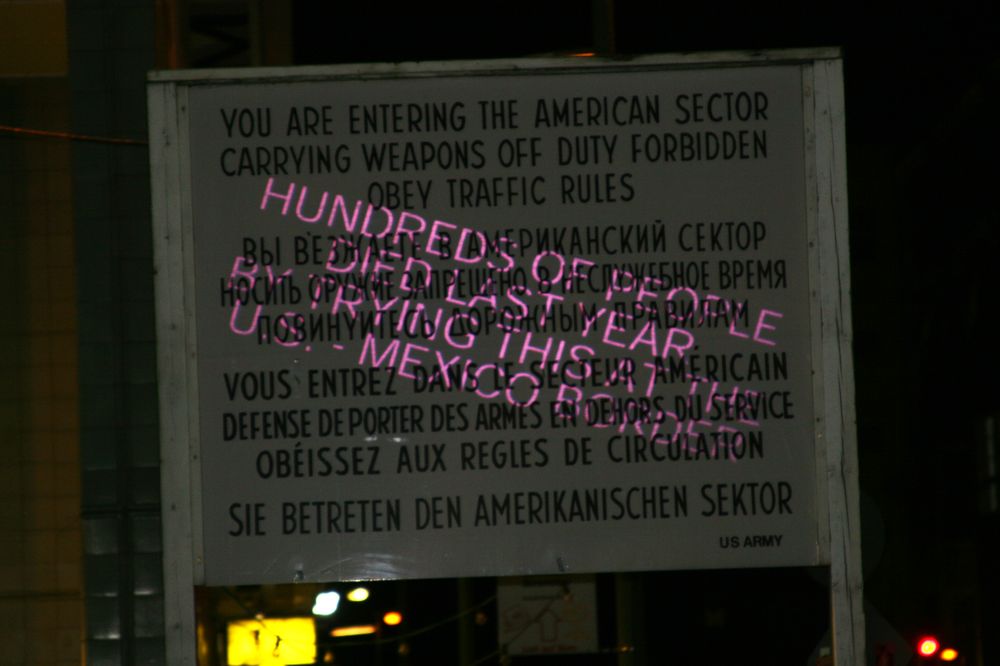 Original: 3g.jpg | 1152 * 1728px | 1.6 MB
The “Image Fulgurator” is a device for physically manipulating photographs. It intervenes when a photo is being taken, without the photographer being able to detect anything. The manipulation is only visible on the photo afterwards.
In principle, the Fulgurator can be used anywhere where there is another camera nearby that is being used with a flash. It operates via a kind of reactive flash projection that enables an image to be projected onto an object exactly at the moment when someone else is photographing it. The intervention is unobtrusive because it takes only a few milliseconds. Every photo another photographer takes of an object at which the Fulgurator is also aimed is affected by the manipulation. Hence visual information can be smuggled unnoticed into the images of others.
Technically, the “Image Fulgurator” works like a classical camera, though in reverse. In a normal camera, the light reflected from an object is projected via the lens onto the film. In the “Image Fulgurator”, this process is exactly the opposite: instead of an unexposed film, an exposed and developed roll of slide film is loaded into the camera and behind it, a flash. When the flash goes off, the image is projected from the film via the lens onto the object. Due to the similarity of the two processes, the Fulgurator looks like a conventional reflex camera. As soon as the builtin sensor registers a flash somewhere nearby, the flash projection is triggered. Hence the projection can be synchronized to the exact moment of exposure of all other cameras in its immediate vicinity. Via a ground-glass screen, it is possible to focus the projection and to position it on the targeted object.
The motivation for developing the “Image Fulgurator” was people’s great trust in their photographic reproductions of reality. A camera can be used as a personal memory tool, since people do not doubt the veracity of their own photographs. Hence, photos can reproduce the reality of an individual environment or public space. At sacred or popular locations, or those having a political connotation, an intervention with the Fulgurator can be particularly effective. Especially objects with a special aura or great symbolic power are good targets for this kind of manipulation. With the Fulgurator it is possible to have a lasting effect on those kinds of individual moments and events that become accessible to the masses only because they are preserved photographically. In this context the Fulgurator represents a manipulation of visual reality and so targets the very fabric of media memory.
For more technical details see the patent at: http://www.juliusvonbismarck.com/fulgurator
Julius von Bismarck (DE), born in 1983. After growing up in Saudi-Arabia and Germany, he studied and worked in Berlin and New York. Since 2005, he has been a Student of Experimental Media Design at the Berlin University of the Arts. His works operate between the fields of art, Science and technology, whereby his thematic priorities are perception, documentation and the manipulation of urban space. Apart from developing and designing interactive objects and processes, he works as a cameraman.