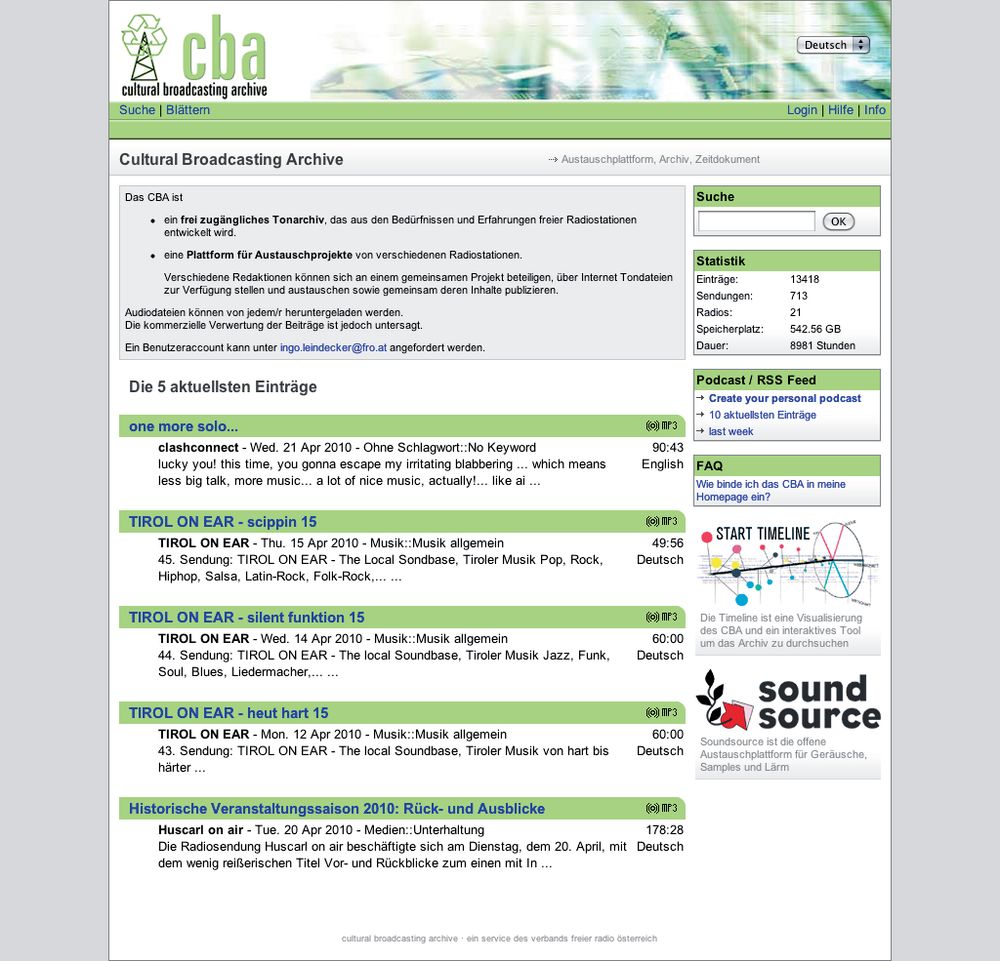 Original: AE_PRX_2010_DC_00207_cba_website2010_1534266.jpg | 2048 * 1970px | 713.7 KB
As the audio database principally for Austrian free radio stations, the “Cultural Broadcasting Archive CBA” is a central distribution tool for non-commercial media production. The open-access communication and exchange platform enables the mutual sharing of radio programs as well as access to and publication of content from sources outside the respective coverage areas of local broadcasting stations. More than 9,000 rebroadcasts from radio stations all over Europe have been documented since 2004 alone. The radio network community consists of more than 500 individuals, groups and editorial staff and regularly publishes content on http://cba.fro.at.
The long-term, joint archiving of media productions from 14 radio stations located in different regions of Austria has resulted in the emergence of a continually growing pool of alternative media coverage items, which are freely available not only for private use but also for research purposes. CBA reports on the social, political and cultural events of individual regions and, over the course of the last ten years, has become an important contemporary document of considerable local significance.
There are now over 13,000 audio reports on a broad range of subjects available for streaming, downloading or as podcasts: from ethnic minority programs to programs on women’s, media and migration policies, from critiques of globalization to programs about art, literature, independent cultural work or philosophy. The platform enables content, events and discourse that go largely unnoticed by the media to reach a wider, translocal public and supports simple networking and communication between producers and listeners through means of feedback.
The platform is continually being further developed and tailored to meet the practical needs of free-radio operators, in particular with a view to maximizing openness. This has led not only to a critical debate about the tension between the demand for public accessibility and legislation regarding the exploitation of intellectual property, but also to creative projects: the visual representation of the database (http://cba.fro.at/timeline) makes the archive more intuitively accessible, while the interactive audiovisual installation “Out Of Demand” (http://outofdemand.fro.at) makes it come alive in a sensual way.
CBA—Cultural Broadcasting Archive began in 1999 on the initiative of Linz Radio FRO (Free Radio of Upper Austria). 2000-2001: The Austrian Association of Free Radio finances the project and further develops the platform to a significant extent, in accordance with the needs of the users. 2002: The archive is made available more quickly to non-German speaking radio producers through translations and workshops. In 2010 CBA is re-launched again and is promoted as an open source project. Participants: Manuela Mittermayr (1999-2000), August Black (2001), Roland Jankowski (2001), Ingo Leindecker (since 2000), Doris Prlic (2006-2009), Mario Kishalmi (2006), Thomas Diesenreiter (since 2009).