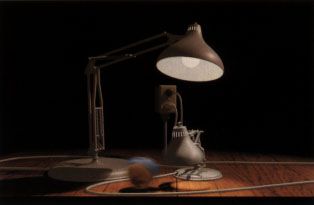 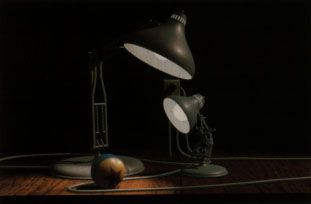 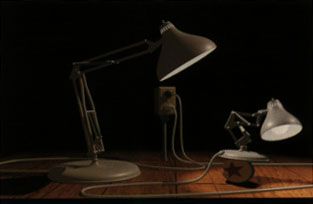 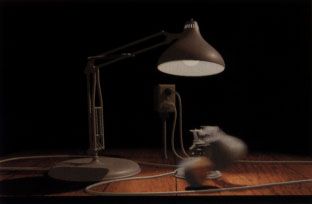 Riffs of jazz piano amble along leisurely as a small, colorful rubber ball rolls toward a metal desk lamp. The lamp appears to study the ball thoughtfully, then pulls it away with his lamp shade. The ball returns. The lamp again pulls the ball away, and again the ball returns, this time chased joyfully by a squeaking baby lamp. Waggling wildly, Junior Lamp aims the ball toward Papa Lamp, but it bangs into his little cord and stops. Still patient, Papa pushes the ball back toward his son.
Zealously, Junior leaps onto the ball and begins bouncing up and down on it. The abruptly bursts and deflates. Junior remorsefully questions his father, and Papa verifies with a nod that ball has departed for a rubber-ball heaven. Junior slumps in sorrow. Papa Lamp nods knowingly at his son, and Junior dejectedly hops away. Suddenly Papa jumps backward to avoid an oncoming beach ball, chased once again by a jubilant Junior Lamp. Papa shakes his lamp shade, sighing.

"Luxo Jr." is an award-winning achievement in computer animation created by Pixar in San Rafael, CAL. The film breaks new ground for its ability to imbue inanimate objects with personality and communicate emotion with computer techniques.
John Lasseter, a former Disney animator, working with Bill Reeves, Eben Ostby, and Sam Leggler, also of Pixar, gives two Luxo desk lamps the emotional intensity of a father-son relationship. The lamps are playing a friendly game of catch with a rubber ball when Luxo Jr.'s toy accidentally bursts. The film communicates compassion and remorse with merely the wave of a lamp cord and the dip of a metallic head.
For this film, Pixar developed several technical achievements, most notably that of self-shadowing, where an object accurately projects shadow sources upon itself. The film was animated by a keyframe animation system with procedural animation assistance, and images were rendered with multiple light sources and procedural texturing techniques. computation was performed on four computer Consoles, Power 6/32 computers, named Mickey, Donald, Manet, and O'Keefe.
The film was introduced at the August 1986 SIGGRAPH (Special Interest Group on Computer Graphics) convention in Dallas were it received rousing cheers from an audience of 6,000 computer experts. This enthusiastic reception prompted a story in the September 1 issue of Time, which reviewed the film and described the origins of Pixar.
"Luxo Jr." has been nominated for an Academy Award in the Best Animated Short Film category. It has also won awards at the Berlin International Film Festival, the Canadian International Festival of Animation, the San Francisco International Film Festival, and the Monte Carlo International Forum on new Images.
Formerly the computer Graphics Division of Lucasfilm, Ltd., Pixar was acquired by Steven P. Jobs and the employees of Pixar in February, 1986.

I conceived the figures, the decoration and scenery and made the set-up. With Sam Leggler we consequently deciphered every action to make it readable for the computer. We controlled the computer's actions and often interfered to correct its work.
It is ridiculous to think that the animator should have to become an informatician, he would need a second life for that. And it would be stupid as well to think that an informatician might transform himself into an animator - one knows how long that takes. But naturally it is indispensable that the animator know a little about his electronic tool, its concept of work, its logics. And unless one is really dull, this is easy to learn, and this is the basic for evaluating the capacities and limits of the tool, and above all for communicating with the technicians.
John Lasseter: direction, animation, models
Bill Reeves: technical direction, models, rendering
Eben Ostby: models, procedural animation, rendering
Sam Leffler: rendering
Rob Cook: rendering
Don Conway: laser output scanning
John Lasseter (USA); born in 1957 in Los Angelos, got his training at the California Institute of the Arts in Valencia. In 1984, John Laseter joined the Pixar computer animation group after having worked for five years at the Walt Disney Studios. There he had collaborated in the animation of the movies "The Fox and the Hound" and "Mickey's Christmas Carol". John Lasseter's first contact with computer graphics occurred when working at the production of "Wild Things Test", the first animation combining Disney's animated cartoon characters with a computer generated background. Consequently, John Lasseter took part in the production of Disney's first all digital production "Tron". At Lucasfilm, now Pixar, he refines the merging of animated cartoon and computer animation and develops a 3-D computer animations system with the Pixar Team, allowing an interactive animation of the characters. John Lasseter designed a computer animated and generated a stained glass figure for Steven Spielberg's "Young Sherlock Holmes" and in 1984 "Andre and Wally B", the first completely computer generated 3-D animation.