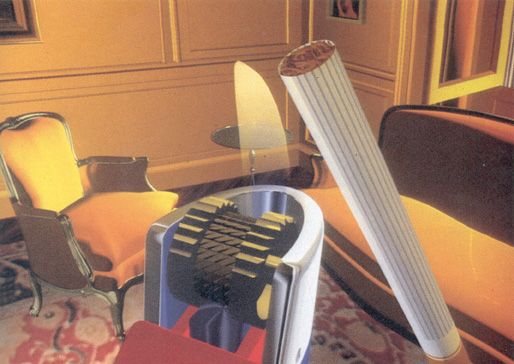 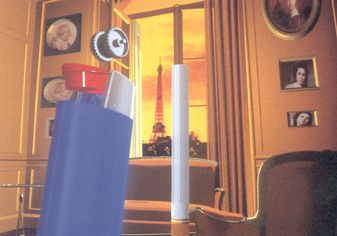 The major aim of director/designers Jerzy Kular and Isabelle Foucher was to narrate a humoristic story in the style of french popular theatre; secondly: to invent a baroque-like environment, particularly rich in textures; finally: to respect current length of advertising spots in order to persuade agency creative staff that numerous possibilities are still to be explored for real creative advertising using computer graphics. (J. Kular/I. Foucher/Sogitec)

The animation was realized on an Convex C 1 Computer and Sogitec software.
”Jumpin' Jacques Splash!“, was produced by Sogitec. The music is by Jean-Claude and Angélique Nachon. The 3-D modelling is by Matthieu Schonholzer, Frédéric Schmidt and Pierrick Brault, who has been co-responsible for the 3-D-animation together with Jean-Luc Savarino.
Jerzy Kular, Canadian citizen, born on June 2nd, 1951, in Cracow /Poland, is living and working in Paris. Jerzy Kular studied fine art at H.B.Beale School London in Ontario, and Design at Humber College in Toronto/Canada. Furthermore he frequented Berlin's Higher Professional School for Optics and Photo Techniques, Cinematography division. After completing his training, he worked at Second German Television network in Wiesbaden for one year and was director of photography for special effects with Euro-Titres for six years. For the past 5 1/2 years Jerzy Kular has been with Sogitec, Paris. He co-directed “Jumpin' Jacques Splash” with Isabelle Foucher.

Isabelle Foucher, painter, was born on Dec. 30th, 1953. She studied at the École Nationale Supérieure des Arts Décoratifs (ENSAD) in Nice. She was art director of a publicity company in Paris. Since 1985, she has been working as a freelance computer graphics designer for Sogitec and other film production companies.