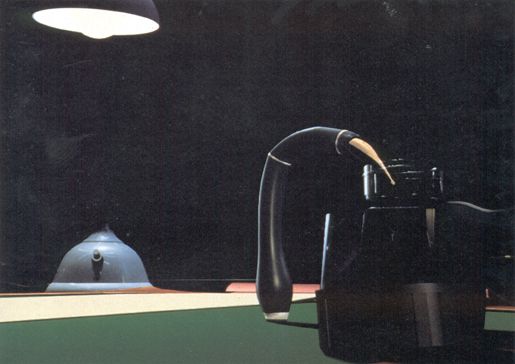 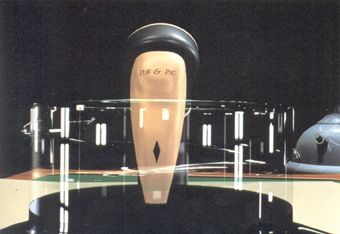 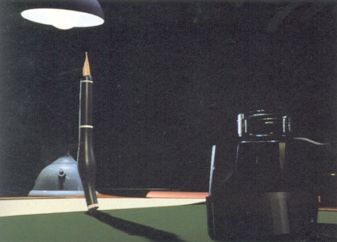 Original: PR_1988_stylo_003_o.JPG | 337 * 242px | 77.1 KB
The computer animation "Stylo" is a story paying its tributes to the legendary Fred Astaire and as such the result of a collaboration over the years by Paul Coudsi as animator and Daniel Borenstein as informatician. The idea for "Stylo" came from Daniel Borenstein, who had already made an animated pencil before. For this film, a veritable fountain pen should be taught to dance. But the goal was not only the animation as such, what the producers tried to make was a real short film including a storyboard, scenario and a main "character". The preparations from the idea to the begin of production took some nine months, wherein the main problems were financial funds raising and finding the necessary production facilities. Now, in September 1987 finally, George Pansu, the Managing Director of Eurocitel - where the necessary equipment was available - accepted the challenge. Thus the concept was presented to the CNC board and - after quite some debates - they agreed upon a grant of 250.000 Francs. The production is based on a fundamental research into the sources: Paul Coudsi analyzed a whole film featuring Fred Astaire frame by frame, in order to study the characteristic rhythmics, the dancing movements etc. and finally transfer them on the fountain pen to be animated.
In January 1988 at last, the work at "Stylo" was done.
The film is a co-production of Eurocitel and TDI with the support of CNC (Centre National de la Cinematographie).
The animation "Stylo" won the first prize in 3-D-animation at Imagina 88 and at the Parigraph 88.

The animation was realized on Silicon Graphics 3130 and 4D70 workstations, with AURORA paint system. Output was produced on 35 mm film with Matrix 6000 camera. The software is by TDI System.

The model was created on a profile network patch system and animated with Daniel Borenstein's original “sketch” programme that allows the construction of a pliable line that may be transformed and pivoted in space, as if one were pivoting a piece of shaped steel wire on the inside of a rubber person. This programme allowed for the construction of the pen, the tip and the ink, although the latter required some minor programme amendments. Frame set-up and movement and positioning of light sources : Explore.
Produzent: George Pansu (Eurocitel), Coproduktion: Paul Coudsi, Daniel Borenstein
Paul Coudsi, born 1953 in Paris. Since 1977 work in cinema and video industry. Paul Coudsi was scene painter for the full length film “Un amour d'emmerdeuse” by Alain Vandercoucal (1978). He also was animation checker for the film “Le chainon manquant” (The missing link) by Picha (1979–1980). From 1983 till 1986 Paul Coudsi has been artistic director in the V.A.L. company.
Principal works: 1981–82 “Nuit”, short film using live action mixed with cartoon animation. 1983–84 “Tintin á Montpellier”, video cartoon made with a Graph 8 (XCOM) paint system. 1986 “Flip-Flap a Palavas”. project of a TV serial using different kinds of technics. 1987 “Portraits”, two animated portraits made with pastels, gouaches and paper cuts.


Daniel Borenstein, born 1956 in Tel Aviv, worked for 5 years as free lance sound Engineer and he also worked 3 years in a cinema special effects company – ACME Films. Since 1982 work on 3D Computer Graphics, first at INA, then at TDI as R&D Engineer. Specialized in interactivity between computer and man, and animation. Full music studies. As a music composer he published two works: “M-Tango for saxophone and electro-acoustic system” and “Eshet Hail for saxo tenor solo”.