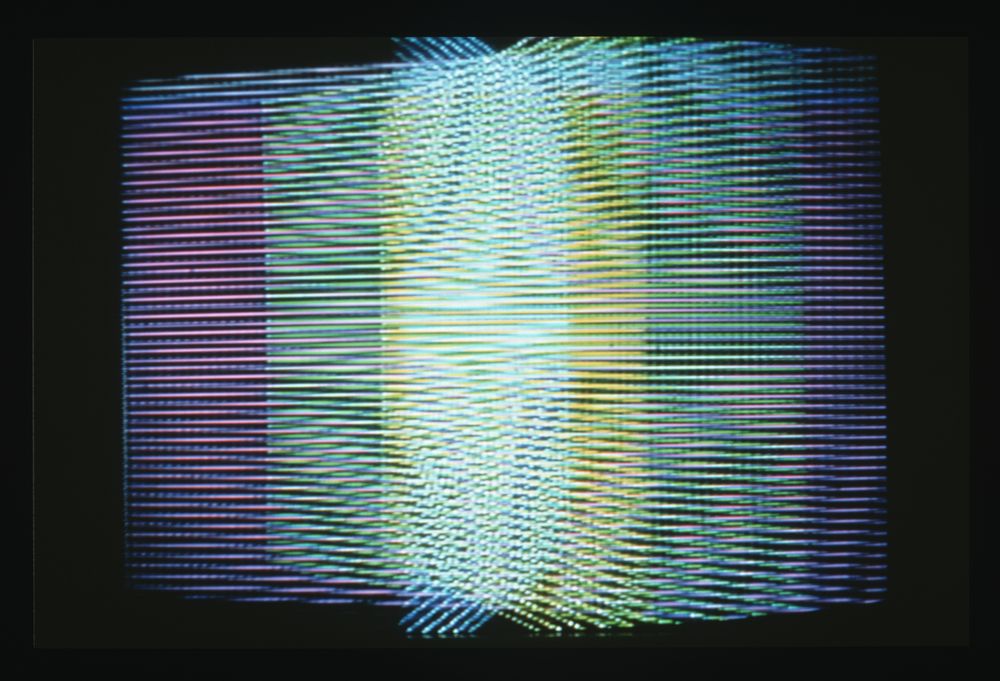 Original: ENT_8864_AEC_PRX_1988_time_as_code_chronokratie_1405314.tif | 4425 * 3017px | 42.9 MB
In “Time as Code: Chronokratie”, a grid of horizontal lines was created with the computer (IBM AT with Targa 16 card, Artworks Environment and Tips software). This grid was then superposed in 2 to 6 layers and logically and systematically programmed to spatial vectors: countersensed, symmetrically, vertically, laterally, rotationally, delayed, simultaneously etc. By using this self-operation of a grid image (“the real thing”) upon the grid system of the electronic image as such, the scanning principle of the cathode ray tube (the “imaging apparatus”), one could induce automatic, self executing pattern making processes (moiré, rings etc) as well as auto-colouring based upon the principles of colour addition and colour subtraction. A very self reflexive, auto-creative, auto poetic work, completely abstract and synthetical, but taking its visual language not from some obscure metaphysical spirituality, but from the scientific, rational, technical / technological foundations of the machine as such, and is insofar related to the new tendencies of fine arts (like “Neo Geo”).
As a self-reflecting / reflective opus, it is even more the work of the (artificial) conscience, insomuch as self-reflection is generally accepted as a primary element of consciousness as such. So this work somehow shows the “Consciousness of The Machines”.
The Time Code is not only an important tool in creating electronic images, but in our “Era of Acceleration”, the whole culture is under the Law of Time Code. Today, as the Reign of Time has arrived, the Time Code has become the universal code. A fight for time as a means of production is raging: the Capitalism of Time fights with the Slaves of Time, who buy their time, take loans and mortgages, lease their time. And on the other side, there is the Aristocracy of Time, who controls time as capital. “Time for sale” (time is money = time is number) is what it says on the gates to the industrial society. Chronometry and chronocraty, the measuring of time and the reign of time, these are the basic features of the new society, this is the ,,social" message of this chronolytical computer animation. (P. Weibel)

“Songs of the Pluriverse” is a cyc1e of visual songs (0 – 11) that deal with the techno-transformation of the world in the past two centuries. The work tries to achieve a hybridization of all electronic image techniques by using digital equipment like Rutt-Etra Scan Processor, Mirage, ADO, Abekas 62, Paintbox etc. as wen as software like Artworks and Tips. (P. Weibel)
Peter Weibel, born 1945 in Odessa, ranks among the most important representatives of contemporary art in Austria. He was one of the first to get entangled with video art and consequently with computer art in this country. Multi-talented Peter Weibel is artist, author, musician, art theoretician and teacher in one person. He studied literature, medicine, logics and philosophy in Paris and Vienna, and towards the end of the Sixties he became one of the most radical representatives of Vienna Actionism and a theoretician of Austrian avantgarde. During the Seventies, Peter Weibel produced a series of video projects with the Austrian video and film artist Valie Export performances, installations, films (e.g. Menschenfrauen).
From 1976 to 1981, Peter Weibel was lecturer for “Theory of Shape”, since 1981 he is guest professor for Design Theory and Fine Arts Training at Vienna's Applied Arts College. In 1981, he took over a guest lectureship at the College of Art and Design in Halifax, Canada. Already in 1979, Peter Weibel started teaching at the Integrated College Kassel, F.R.G., first as guest professor for Media Arts, 1981 as lecturer for “Theory of Perception”, 1983 as professor for Photography. Since 1984 he is professor for Media Design at Vienna's Applied Arts College, since 1985 Associate Professor for Video and Digital Arts at the Center for Media Study at the State University of New York in Buffalo.
Besides his teaching activities, a number of single publications and essays about matters concerning the Theory of Art were produced since 1969 (film, video, Art and Democracy, media aesthetics). With his works, Peter Weibel is present at international exhibitions and galleries