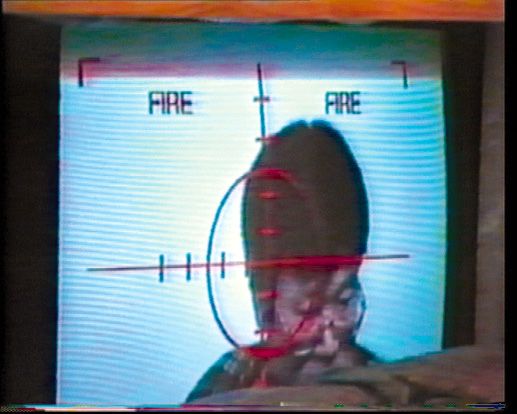 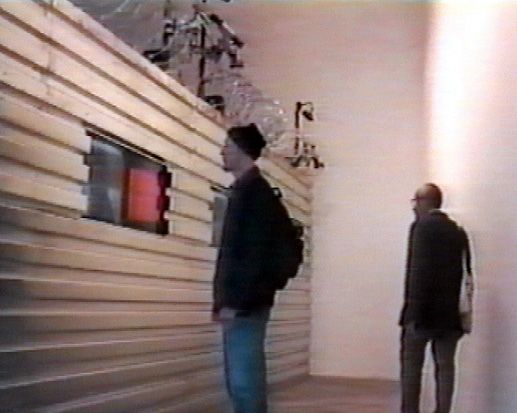 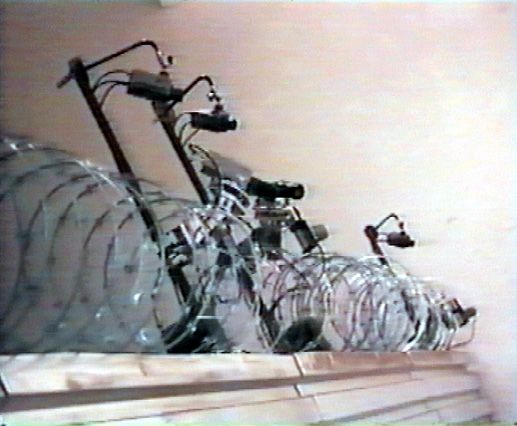 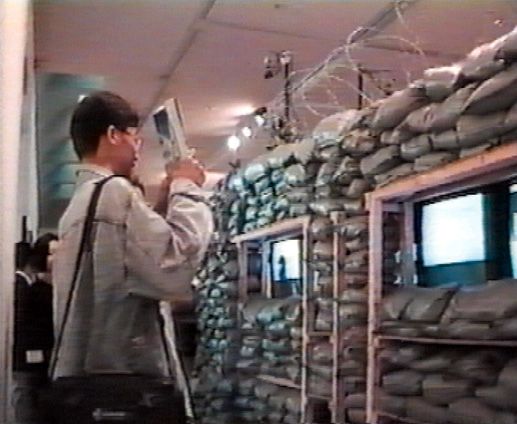 Original: PR_1997_aziborder_004_o.jpg | 517 * 424px | 87.0 KB
In "Border Patrol", Paul Garrin and David Rokeby deal with the conflict between technology as instrument of control and power on one side and a public controlled by technology on the other side.

Autonomous Object Tracking System with Robotic Cameras
Stationary cameras function as visual sensors to the VNSII interface by David Rokeby that controls the positioning of robotic "snipercams" which lock on to moving targets (the viewer's heads) and "fire shots" (audio of gunshots). The viewer sees his/her image on video monitors, set into the face of the metal wall, in the crosshairs of the snipercam. Each of the 4 autonomous snipercams can track up to 32 individual objects, and monitor their status: scanning ­ looks for target tracking ­ found target lock ­ engage target fire ­ shoot target verify ­ check for movement if no movement go on to next check again for movement after x duration, end time to live cycle.

Security through InSecurity
Increase the level of paranoia ... bombs in the metro ... bombs in Oklahoma ... bombs in the World Trade Center ... bombs in Mururoa ... Who are the real terrorists? Edam Salem, who was a key witness in the so called NYC terrorist conspiracy, was a paid informant for the FBI (and was also working with the FBI before the bombing of the WTC). Salem was the one who set up a hidden video camera and taped a "bomb making class" thereby entrapping the participants when the secret tape was used as damning evidence, claiming that the fertilizer and fuel oil bomb they were cooking up was meant for the U.N., the Lincoln and Holland Tunnels, and the Federal Building in Lower Manhattan. Even though no bombs ever went off in any of those locations, all were found guilty of sedition (through an obscure, 19th century law not invoked since the American Civil War) ... Muslim Fundamentalist Terrorists ... that was the catchy phrase. Enough to inspire fear in the public ... enough to convince them that the new "anti-terrorist" laws are meant to "protect" them. Was the US government (or at least the FBI) complicit in the so-called terrorist bombings? If so, their strategy seems to be working. The new anti-terrorist laws recently passed seriously erode civil liberties and bring the US closer to a police state. The new laws provide increased police powers, surveillance of the general population through use and development of technology and tactical training for a growing number of police and military, in preparation for urban warfare and counter terrorism operations. What happened to the US Constitution? How did the government get the general public to accept greater police control over their lives without provoking large-scale revolt? Create fear of terrorism and identify a defined enemy, and the general public will give up privacy and civil liberties in favor of "security". Whether the bombs are in the metro, Oklahoma, or in the Pacific atolls of Polynesia ­ the bombs themselves merely fuel the real weapon: FEAR. A fear that the ordinary suddenly becomes deadly ... a fear which provokes irrationality ... a fear which begs for protection ... at any cost. The message of the state: create a State of Insecurity in order to establish Security ­ by any means. Ask yourselves ­ is this what you want?
David Rokeby (CDN) is an interactive sound- and videoinstallation artist based in Toronto, Canada. He has been creating interactive installations since 1982. He was awarded the first Petro-Canada Award for Media Arts in 1988 and the Prix Ars Electronica Award of Distinction for his interactive piece “Very Nervous System” which is now being used to enable a paralyzed woman to speak and write.

Paul Garrin (USA) works as a media artist and has been collaborating with Nam June Paik for a long time. His documentation of the "Tompkins Square Riot" 1988 in New York City is known as the spark which ignited the "camcorder revolution". He has been Artist-in-Residence at the Berlin Videofest in 1990 and has been awarded several highly recognized prizes.