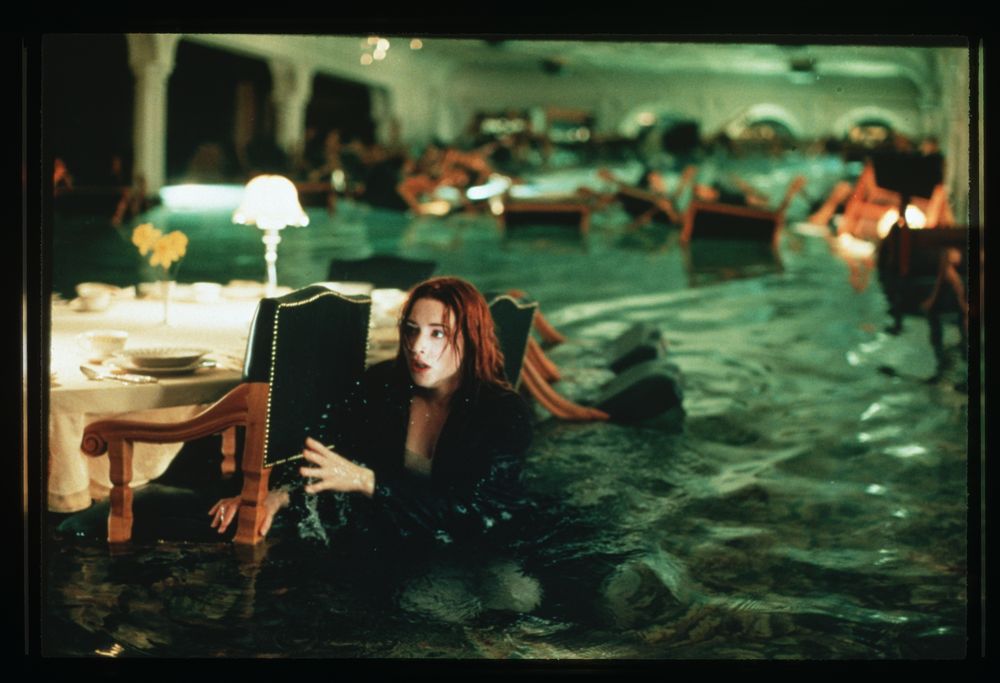 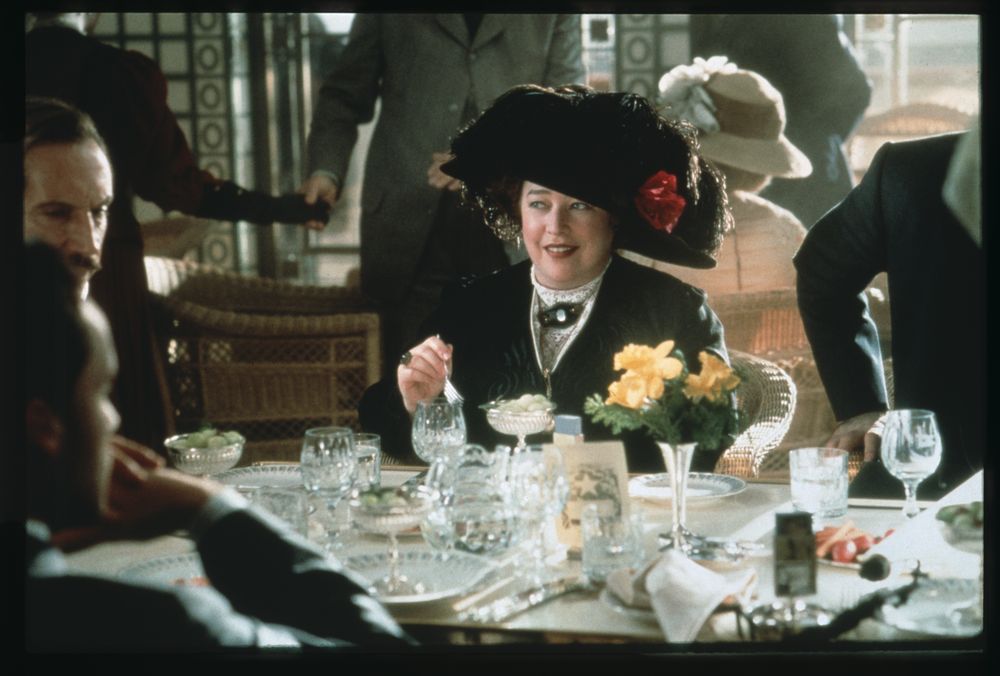 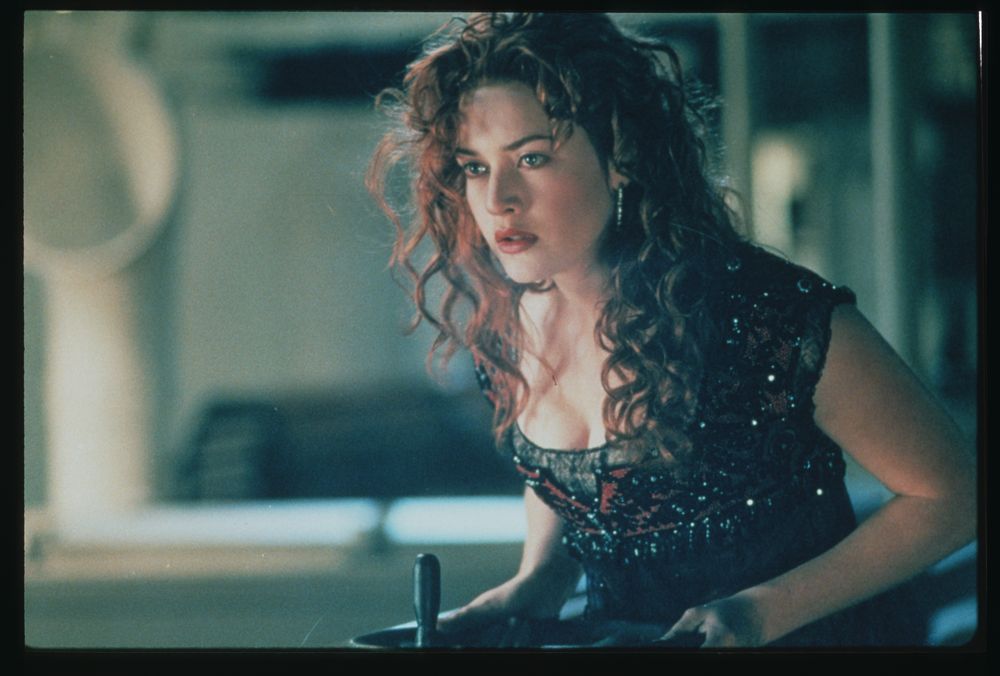 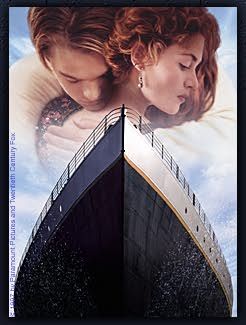 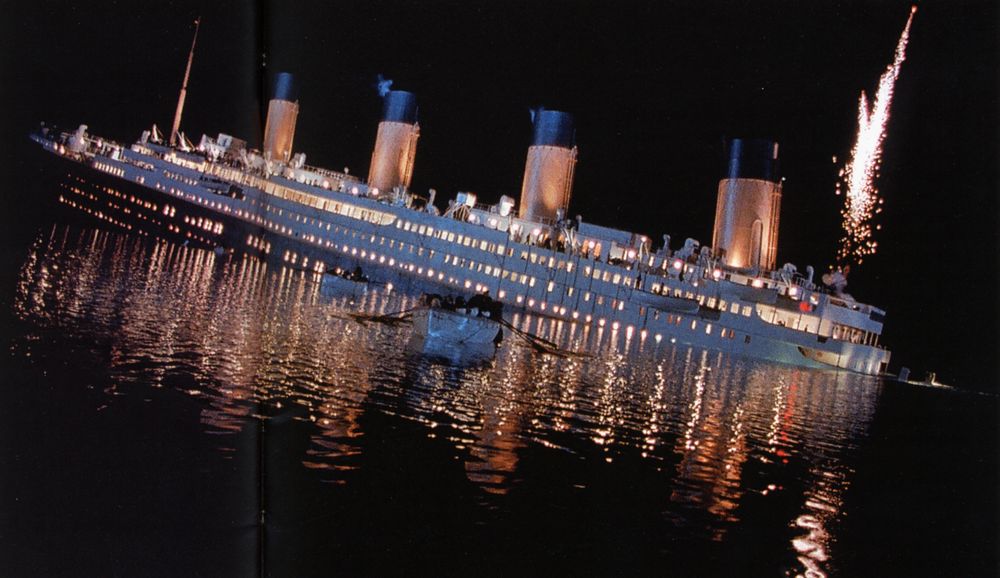 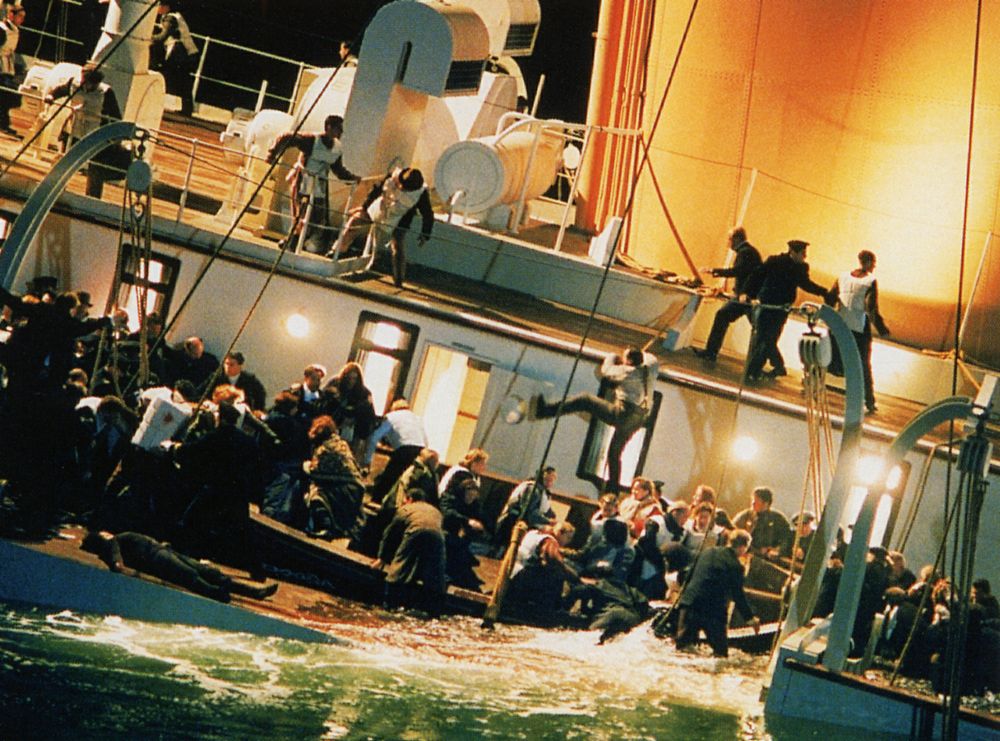 Original: PR_1998_titanic_003_o.jpg | 1622 * 1203px | 2.0 MB
Populating the deck of the "Titanic" with digital passengers was an enormous animation challenge for the Digital Domain crew under the guidance of Roberto Legato.

For the feature film Titanic, we were tasked with the job of populating the deck of the ill-fated liner with digital passengers. The animation challenges were formidable and we approached the problem from many different directions. There was ultimately no one solution but a composite of techniques to arrive at animation that helped tell the story at hand.
From the start, we knew that we were going to have to replicate human beings in 3D and strive for maximum photo-realism in look and performance. Initially, we looked into using performance capture techniques and technology to "digitize" actors’ performances. We also figured we could "capture" the clothing as well, to infer extremities that were covered during capture with the long dresses and coats that were the style of the day.
Marker counts topped 60 for most of the captures. There were typically two or more performers per capture. This enabled us to preserve a sense of naturalness in the performances so that the resultant motion between characters would be natural. Sample rates were between 60Hz and 120Hz depending on the frenetic nature of any particular performance.
Stunt people were also captured for the sinking sequence. Even though the resultant performances were digital, the performers could still "author" themselves in a dynamic yet controlled way. 200 foot high falls, traditionally very dangerous, could be completed on our stage at only 20 feet and extended digitally. We dressed the "set" with railing extensions, ropes and deck capstans to give some context to the space and then surrounded the area with cushions and safety bags. The performers could then get some sense of the environment they would eventually be digitized into and be safe doing it.
Although excellent results were achieved with our performance capture-driven animation solution, we found that the process was too time consuming and inflexible to satisfy all our needs. Once the captures were processed, skeletons were generated of kinematic chains. This was read into the animation system and enveloping commenced. Unfortunately, changing this data, from a directorial point of view, was problematic. Unraveling forward kinematics, at that time, was very difficult. So, the decision was made to augment our library of animations via other approaches.
As a first step, we had artists create animations of characters involved in fairly simple activities - standing, talking, leaning at the rail - via a purely key-framed approach. Yet we knew we had an enormous number of very vigorous animations that remained to be created for the sinking sequence and elsewhere that we didn’t feel would easily lend themselves to key-framing without reference to some sort of recorded human motion. We came upon the idea of a hybrid system, which we dubbed "rotocapture", that allowed us to achieve the photo-realism of a performance-captured animation with more speed and ease.
This system basically involved: capturing the performances of actors and stunt-people with a greatly reduced marker set on a motion capture stage; processing those captures to create animated skeleton-like figures; and bringing those figures into Softimage, the animation package upon which we had settled for the show. We built a very light and efficient proxy model which we called the "Poopett" (for poop-deck puppet), which we would key-frame against the skeletal animation, from which we could derive poses and timing.
A large number of animations were created using this system. Straight ahead key-frame animation, without reference to recorded movement, was also ultimately used widely throughout the show, including during the chaotic sinking sequence.
(Andre Bustanoby / Daniel Loeb)
Hoffman, Bob | m | US
Rob Legato (USA) graduated from Brooks Institute of Photography with a Bachelor of Arts Degree in Cinematography. After freelance supervising and directing for various commercial companies, he turned to television production, serving as alternating Visual Effects Supervisor for the TV series "The Twilight Zone". He earned two Emmy Awards for Visual Effects for his work on Paramount’s "Star Trek: The Next Generation" and "Deep Space Nine" in the varying roles of Visual Effects Supervisor/Producer. In 1993 Rob joined Digital Domain,where he has worked as Visual Effects Supervisor/Second Unit Director for Neil Jordan’s "Interview With the Vampire" and as Visual Effects Supervisor on Apollo 13 and James Cameron’s "Titanic". He was nominated for the Academy Award in Visual Effects for Apollo 13 and won the Visual Effects Academy Award for his work on "Titanic". He also received the British Academy Award (BAFTA) for Apollo 13 and was nominated for the same award for his efforts on "Titanic". Rob is currently Creative Director and Senior Visual Effects Supervisor at Digital Domain.