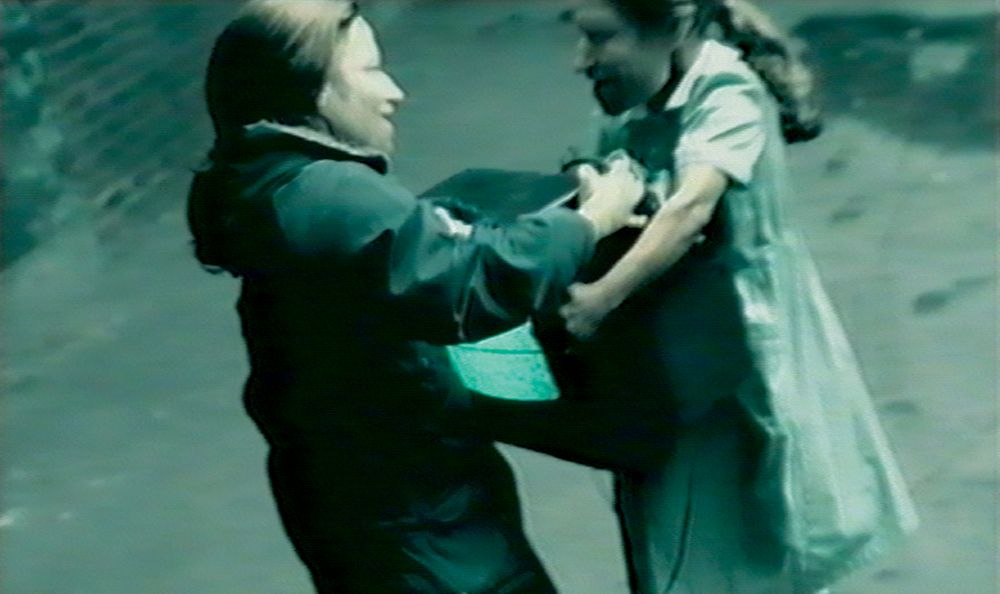 Original: ENT_DM99423_AEC_PRX_1999_come_to_daddy_neu_1533881.jpg | 1772 * 1054px | 909.0 KB
In his video for Aphex Twin's (Richard D. James) single "Come to Daddy", music video director Chris Cunningham enhances the already stirring music, influenced by techno and noise, with his indescribably expressionist images. The result is a breathtaking unity between music and image, a music video that was on the MTV charts for weeks for good reason and immediately won several prizes.
Chris Cunningham was commissioned by Warp Records to write and direct the video for Aphex Twin's acclaimed Come To Daddy - the monstrous and indeed hilarious take on Prodigy-esque type music. Come To Daddy is the second video Cunning ham has made for Warp, the first being Autechre's brooding "Second bad Vilbel". After noting the extent of Cunningham's talent and taking into account the fact he was a massive Aphex Twin fan, he was the obvious man for the job.
Set on a run down East London council estate, where little old ladies and their dogs barely dare to roam, and evil techno spirits contort and explode from trashed TV sets, a gang of seemingly innocent children (who all turn out to be the spawn of the Twin's evil spirit - all bearing his bearded good looks) run riot through the estate, fighting and hurling what ever they can pick up at each other. "It's one of those videos where, if you can manage to see it, you can understand why it hasn't been on the telly much.
"It's a rush, this video," says James, slouching in Cunningham's Soho office. "It gets my ticker going. I don't think it's perverted. It's normal. It's only perverted if you're a lightweight."
"Usually I get sent tracks I hate," interjects Cunningham, "but I wrote this one in five minutes."

Select Magazine December 1997
Chris Cunningham’s career as a music video director began in 1995 when he hooked up with the techno band Autechre and persuaded them to let him direct their promo. The piece was selected best low budget video by Music Week 1995. In August 1997 Chris collaborated with Richard D. James (the Aphex Twin) and directed the video for the single "Come to Daddy". The video has since won a plethora of awards.

Richard D. James (Aphex Twin) comes from a mining family in Cornwall. At an early age he became interested in electronics and attended courses. Today he is proud of having his studio in his bedroom. He loves to present himself as a "nice cornish lad".