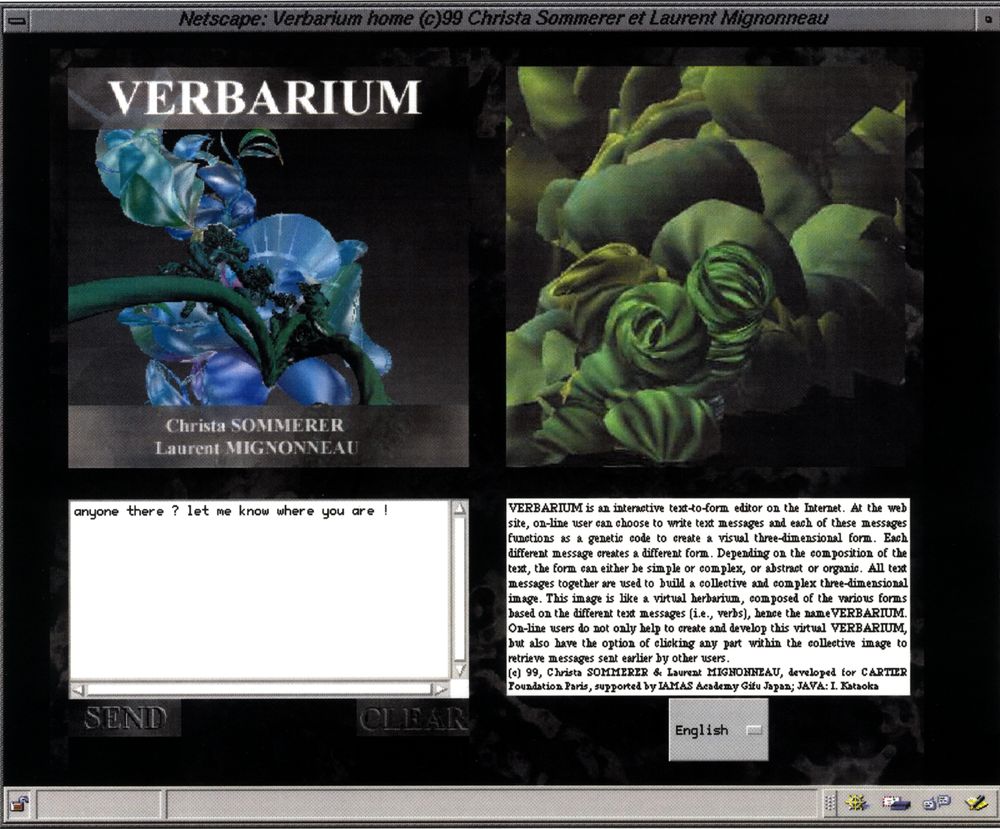 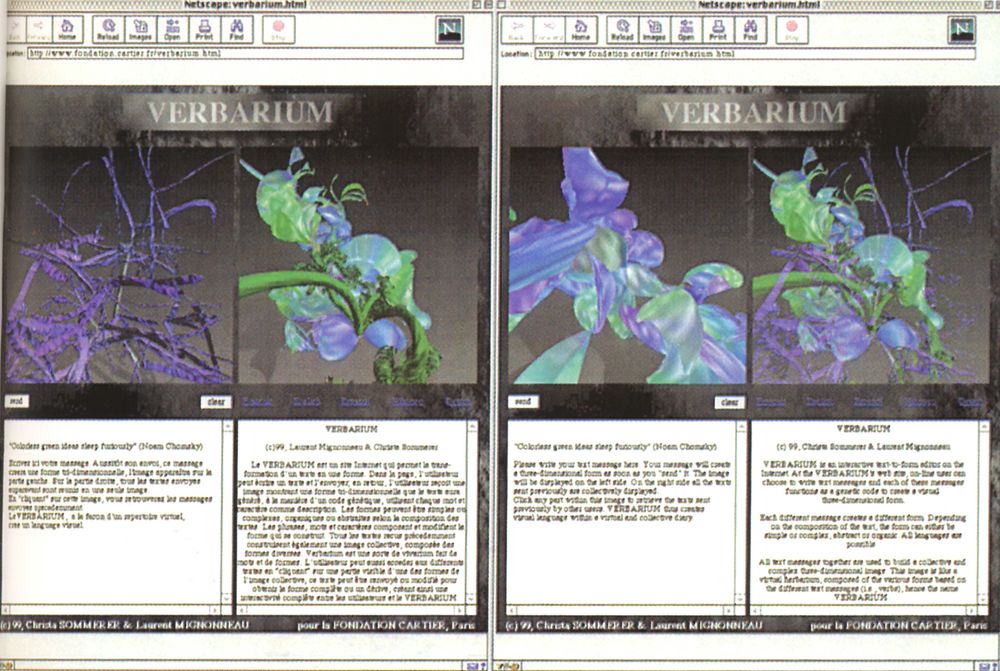 Original: PR_1999_verbarium_001_o.jpg | 1801 * 1210px | 1.9 MB
In 1999 we created an interactive web site for the Internet called Verbarium. This web sites allow users on the Internet to write text messages that are instantly transcoded into visual three-dimensional forms. Our custom designed text-to-form editor takes the letters, syntax and sequencing of a text message as genetic code and updates the design functions for the creation of three-dimensional forms according to the text message parameters. As the text messages of the different users on the Internet are usually unique and diverse, unique and personal three-dimensional visual forms and shapes can be created by the users.
According to Noam Chomsky, human language acquisition is based on a universal grammar that is genetically embedded within the human mind of all normal children, allowing them to learn their native languages naturally and seemingly effortlessly. It was also Chomsky who coined the phrase “colorless green ideas sleep furiously”, an expression that might not make much logical sense to a more scientifically oriented person, but does have quite a lot of meaning for a more visual or art minded person. Though this sentence, as Chomsky has shown, is grammatically correct, its meaning cannot be grasped through logic alone. When we hear this sentence for the first time we see pictures or forms or shapes appearing in our minds. These forms are vague, yet they are defined to a certain degree and can certainly create visual sensations and emotions. Inspired by Chomsky’s sentence and based on the idea of translating words or sentences into visual forms, we created Verbarium.
Verbarium was developed in 1999 for the Cartier Foundation in Paris. The web site can be found at: http://www.fondation.cartier.fr/verbarium.html Online users can create forms and shapes directly in real time by writing text messages with the website’s interactive text editor. The site was created by using Java applet programming.
Each of the incoming text messages functions as a genetic code to create a visual three-dimensional form. Depending on the composition of the text, forms can either be simple or complex, abstract or organic. The form can be viewed by the user instantly at the left-side window of the web page.
Additionally, all incoming text messages become part of a collective image that is displayed on the right side of the web page. This collective image functions as a “virtual and verbal herbarium” (hence the name Verbarium) of forms composed and created through the different text messages (i.e., verbs). The text messages can be written in many languages and the instruction editor displays instructions in the different languages.

Developed for the Cartier Foundation, Paris.
Supported by IAMAS, Japan.
Christa Sommerer (A) studied biology an dbotany in Vienna, completed studies at the Academy of Fine Arts in Vienna and post-graduate studies at the Städelschule in Frankfurt. She is currently professor at the international Media Academy in Gifu (Japan) and artistic director of ATR Advanced Telecommunication Research Laboratories in Kyoto (Japan).

Laurent Mignon-Neau (F) studied sculpting in Angouleme and completed post-graduate studies at the Städelschule in Frankfurt. He is currently artist in residence at the International Media Academy in Gifu (Japan) and artistic director at ATS Advanced Telecommunication Research Laboratories in Kyoto (Japan).
http://www.fondation.cartier.fr/verbarium.html