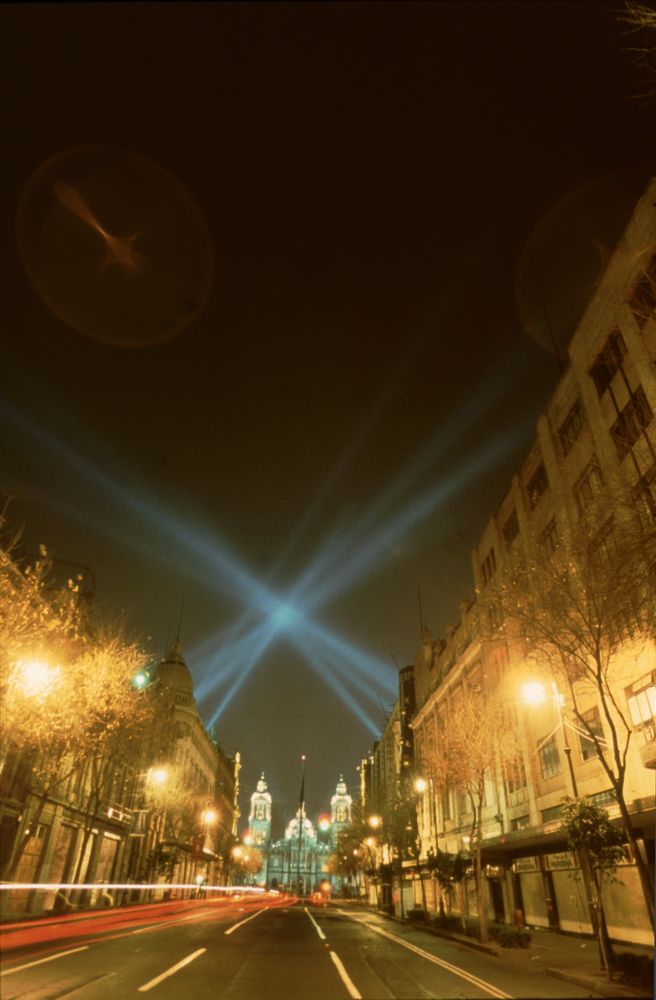 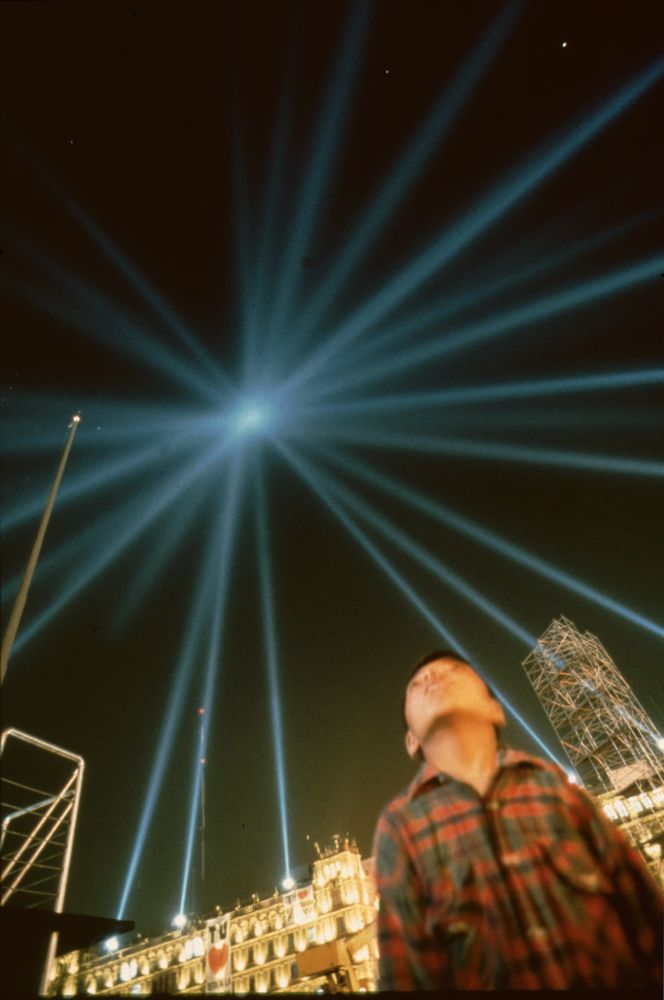 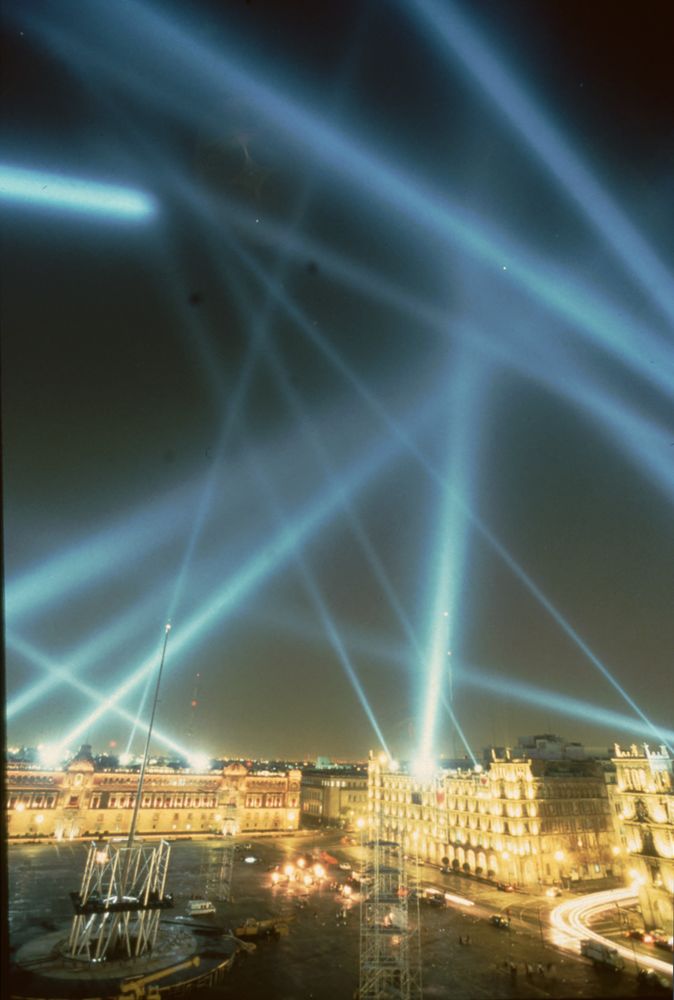 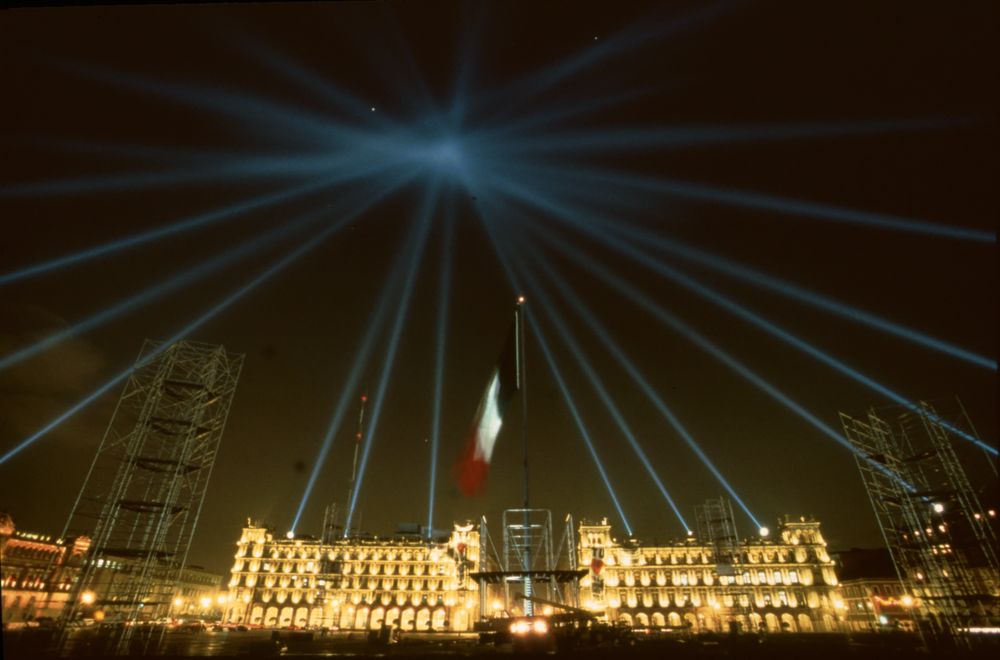 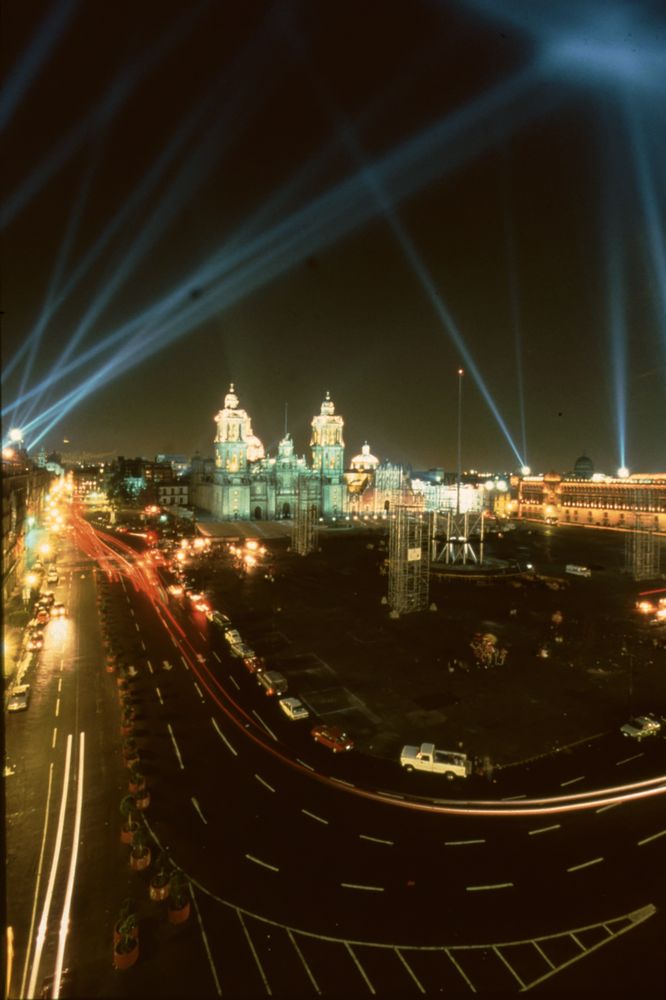 Original: ENT_IA0025_AEC_PRX_2000_vectorial-elevation_1338705.tif | 1073 * 1610px | 5.0 MB
The project of Raffael Lozano-Hemmer, "Vectorial Elevation, Relational Architecture #4", is interesting as a work of public art, as a sophisticated but simple user interface, and as a highly successful collaborative work. It was also interesting in its reappropriation of fascist lighting themes in a celebration of egalitarian access to public artistic expression.

Vectorial Elevation was a large scale interactive installation that transformed Mexico City’s historic centre using robotic searchlights controlled over the Internet.
Visitors to the project web site at could design ephemeral light sculptures over the National Palace, City Hall, the Cathedral and the Templo Mayor Aztec ruins. The sculptures, made by 18 xenon searchlights located around the Zócalo Square, could be seen from a 10-mile radius and were sequentially rendered as they arrived over the Net.
The website featured a 3D-java interface that allowed participants to make a vectorial design over the city and see it virtually from any point of view. When the project server in Mexico received a submission, it was numbered and entered into a queue. Every six seconds the searchlights would orient themselves automatically and three webcams would take pictures to document a participant’s design. An archive page was made for each participant with comments, information and watermarked photos of their design. A notification email message was sent once the archive web page was done.
Vectorial Elevation received participants from over 50 countries and all the regions of Mexico. To facilitate access, free terminals were also set up in public libraries and museums across the country.
The Zócalo’s monumental size makes the human scale seem insignificant, an observation that has been noted by some Mexican scholars as an emblem of a rigid, monolithic and homogenizing environment. Searchlights themselves have been associated with authoritarian regimes, in part due to the military precedent of anti-aircraft surveillance. Indeed, the Internet itself is the legacy of a military desire for distributed operations control. By ensuring that participants were an integral part of the artwork,
Vectorial Elevation attempted to establish new creative relationships between control technologies, ominous urban landscapes and a local and remote public. It was intended to interface the post-geographical space of the Internet with the specific urban reality of the world’s most populous city.
Rafael Lozano-Hemmer: Concept, direction, interface.

Telmex, Centec (Mexico)
Jose Manuel Cortes: Director
Ricardo Medina: Development Manager
Jorge Huesca Salas, Alejandro Fuentes, Hector Leon: Centec engineering
Ricardo Rodriguez Aguilar: Sistemas support
Rafael Lozano-Hemmer (MEX/CDN), currently lives in Madrid. His installation and performance work involves telepresence, networks, and large-scale interventions in public spaces. His pieces have been shown in over a dozen countries, most recently in Austria, Mexico, Germany and Sweden. Will Bauer is the inventor of the Gesture and Media System (GAMS) - a wireless real-time 3D media control tool and holds a variety of patents in diverse areas of technology. He has presented and performed works at many festivals such as Cyberconf, Ars Electronica, SIGGRAPH, the Fringe Theatre Festival, and ARCO.