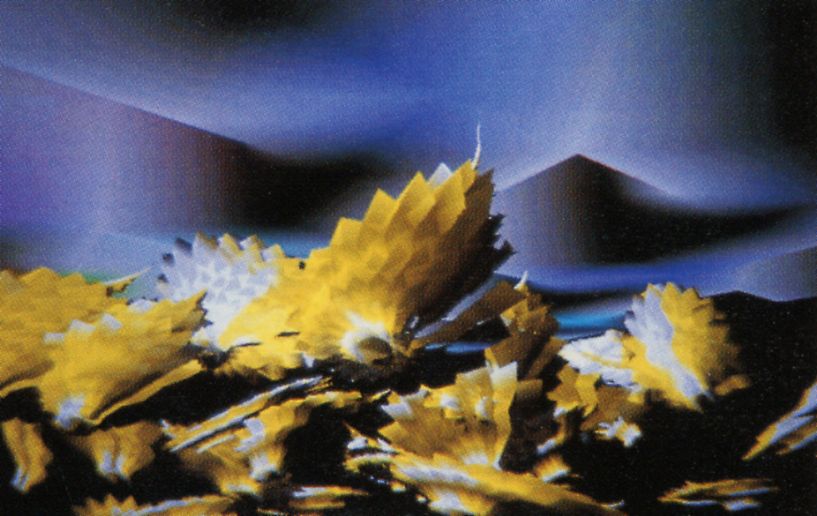 Original: PR_1987_j11_001_o.jpg | 817 * 516px | 494.2 KB
Born 1959 in Athens. Greece, living and working in Paris since 1980. 1980 to 1985 studied painting at Paris "Ecole Nationale Supérieure des Beaux-Arts", since October 1985 computer graphics at the "Arts et Technologies des l'lmage" department of Paris VIII University. As an artist she is interested in the combination of the imagery of painting and of the "calculated" computer image. Two personal and several group exhibitions in France.


Titles of the works submitted for Prix Ars Electronica '87:

The three graphics were realized on a Bull SM90 and the special "Aniflo" software by Michel Bret. (statement included)
Arghyro Paouri, by both training and sensitivity artist and painter, has deliberately chosen her position on the borderline of those two imaginary worlds that the painted image and the numeric image offer us. The continuous to-and-fro between one and the other allows her to enrich painting with all the discoveries of informatic technology with its unpredictable developments and to nourish her research on the computer with her knowledge of art history and her artistic intuitions.
This combination is so rare that it deserves special mention and leads us to expect works of an originality, already indisputably evident in the pictures she is now presenting. (Bernard Rancillac)