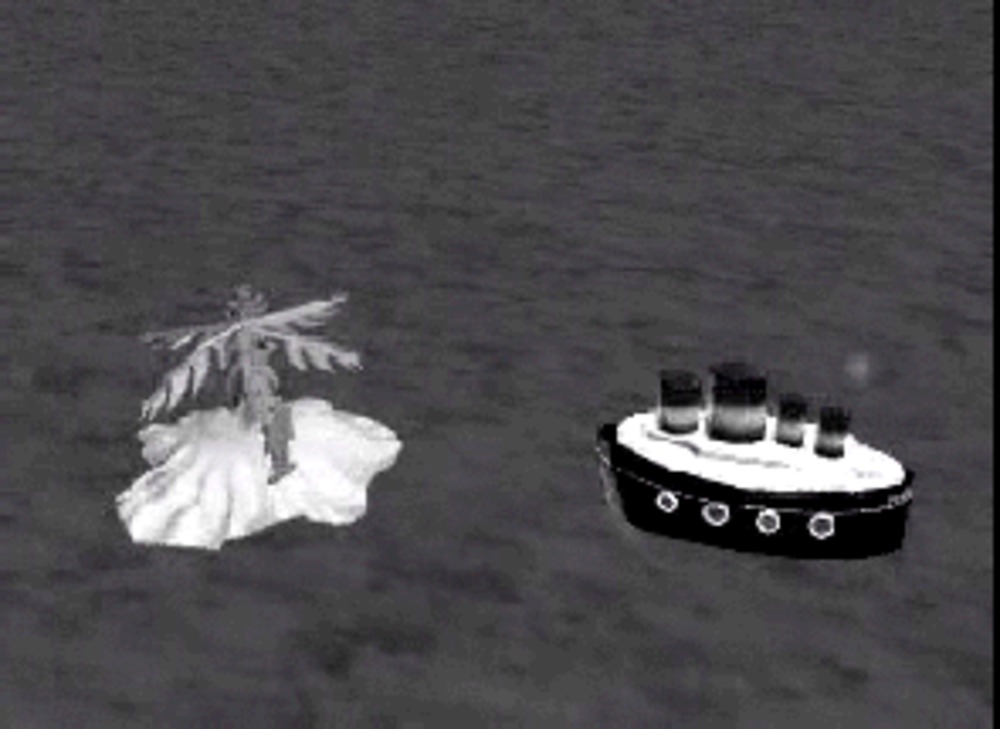 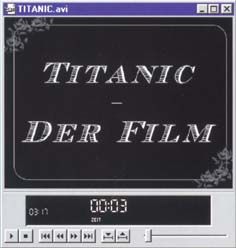 Original: PR_1998_u19titanic_001_o.jpg | 236 * 248px | 18.0 KB
Titanic - der Film is a black and white animated short film, which includes elements of classic silent movies.
Entirely in keeping with 'freestyle computing', our top priority was to make as much use as possible of all the possibilities provided by a multimedia PC today. Thus we fo- cused all our attention on the graphic presentation of our entry. The idea is based on setting a significant, although tiny counterpoint to Hollywood's outrageously overpriced media spectacle. In many respects, we encountered hardly any limitations in executing our project. For instance, we were under no pressure at all to meet budget limitations, because there was no budget, and we had no need to take the expectations of a wide audience into consideration.
What we found quite constraining, on the other hand, may be summarized in the following points: significant lack of resources in the areas of know-how, time, work capacity, time, computing capacity, time, spatial conditions and, of course, time; blocks in the flow of creativity between the brain and the keyboard.
The only purpose of this visual treatment of a catastrophe, as is also true of its popular counterpart, is purely and simply the entertainment of the masses. A second propitious purpose of this project is to show that even at just a fraction of the costs, the product need not fear comparison with regards to taste and performance.
As far as the objects are concerned, it may be remarked that we placed no value on photorealism. We were far more concerned with the highly detailed description of events far removed from the major catastrophe. At the same time, we were particularly concerned with a strong color design and elaborate musical treatment.
Despite a number of differences of opinion, the working climate remained consistently constructive. On the whole, our maxim was defined with the centuries-old saying 'small is beautiful'.
Die anonymen Titaniker
The "anonymous Titanicans" consist of Michael Mossburger (17), Florian Nehonsky (16) and Valerian Wurzer (17). They are students at the BRG (college preparatory school) Marchettigasse in Vienna.