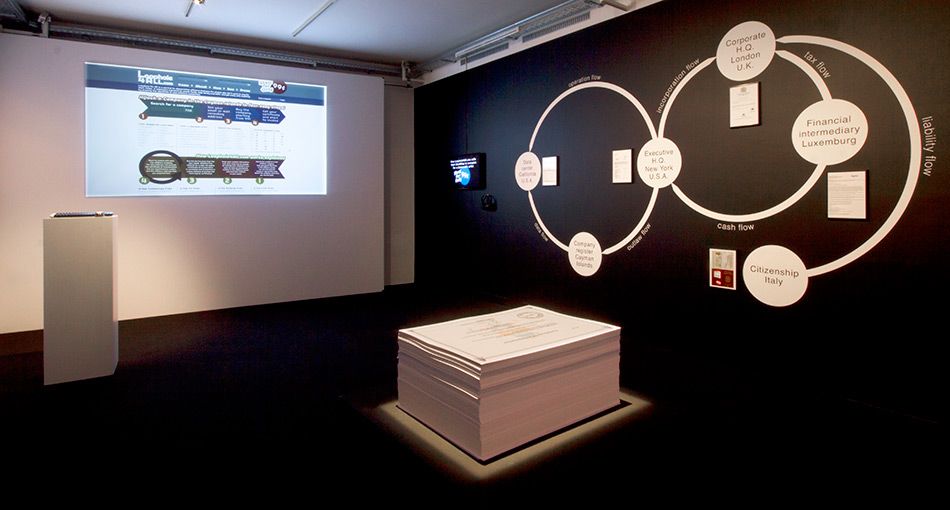 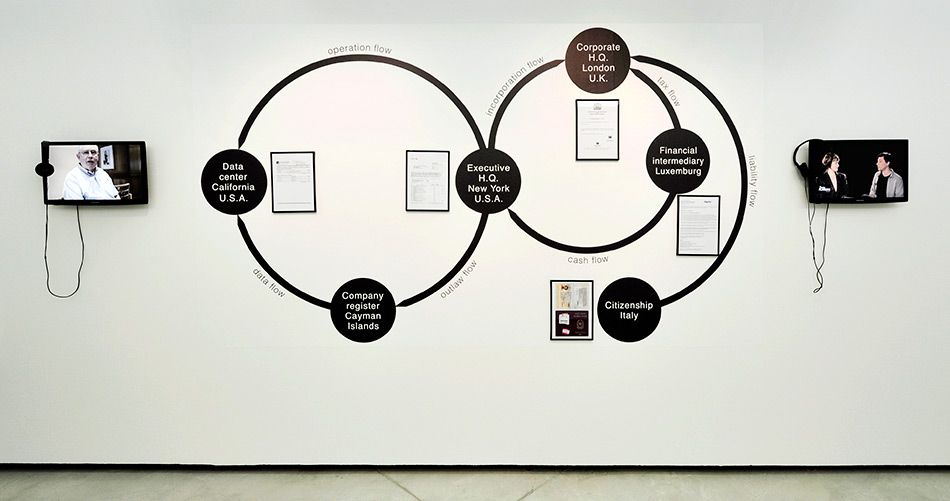 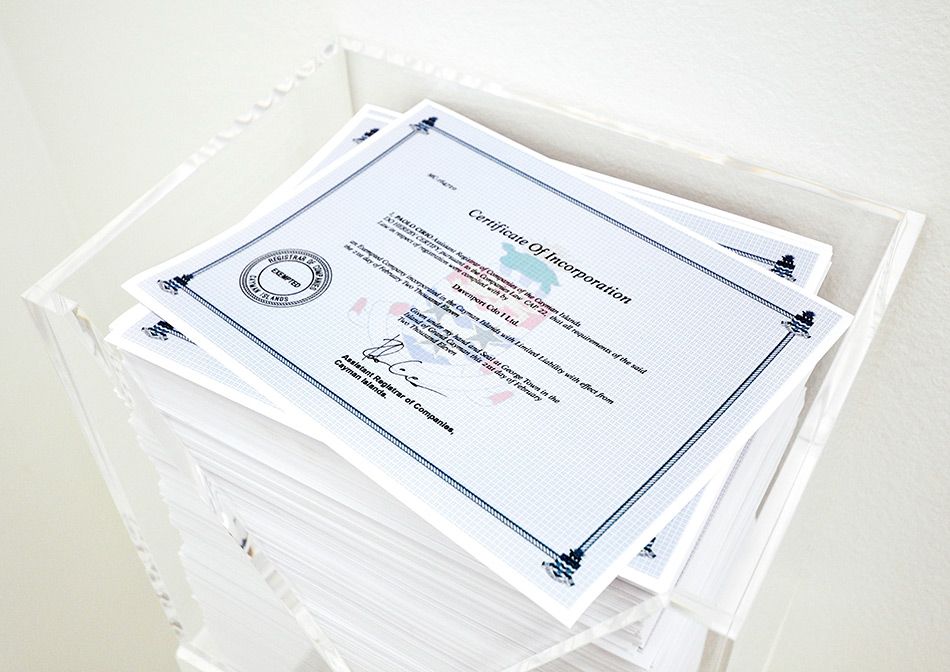 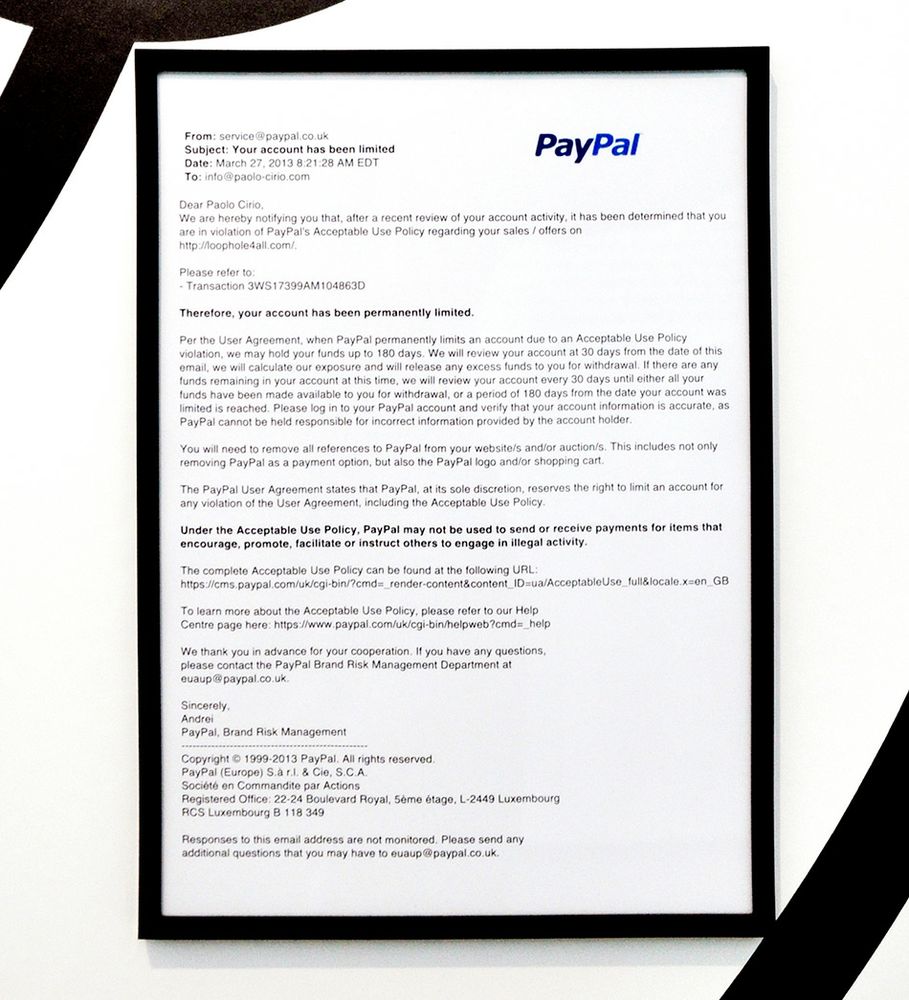 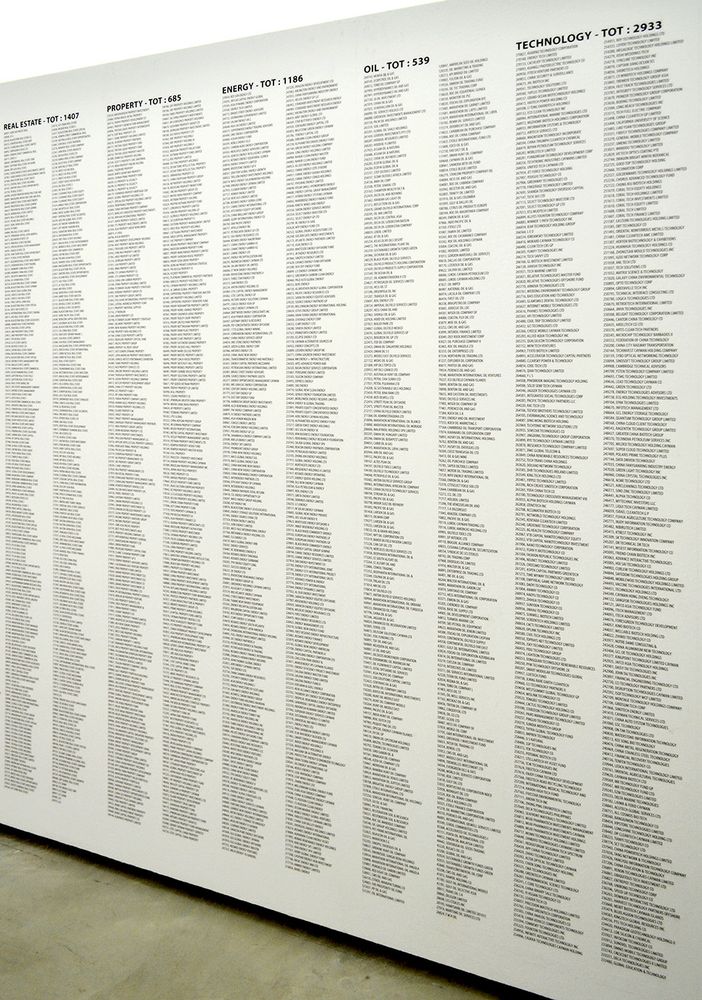 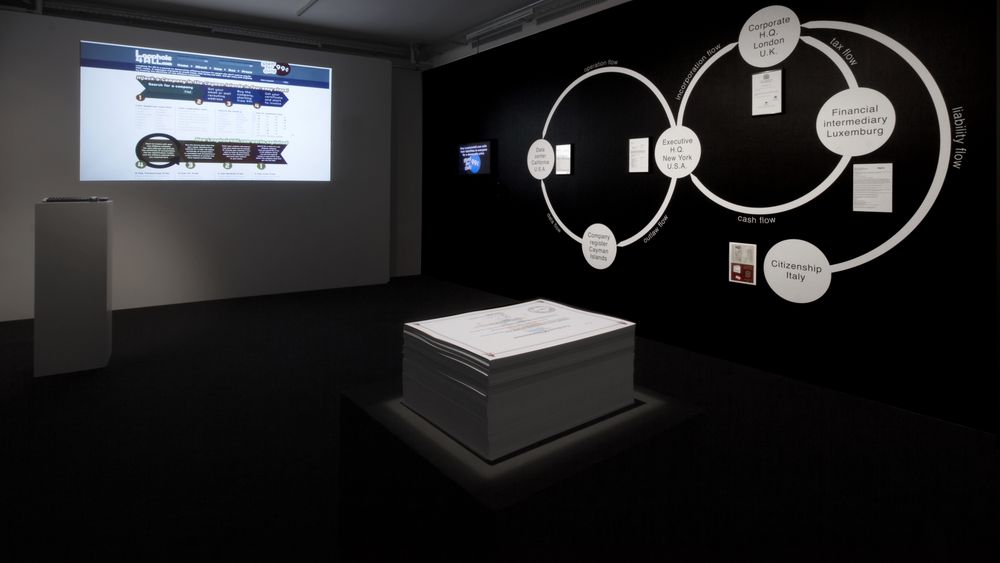 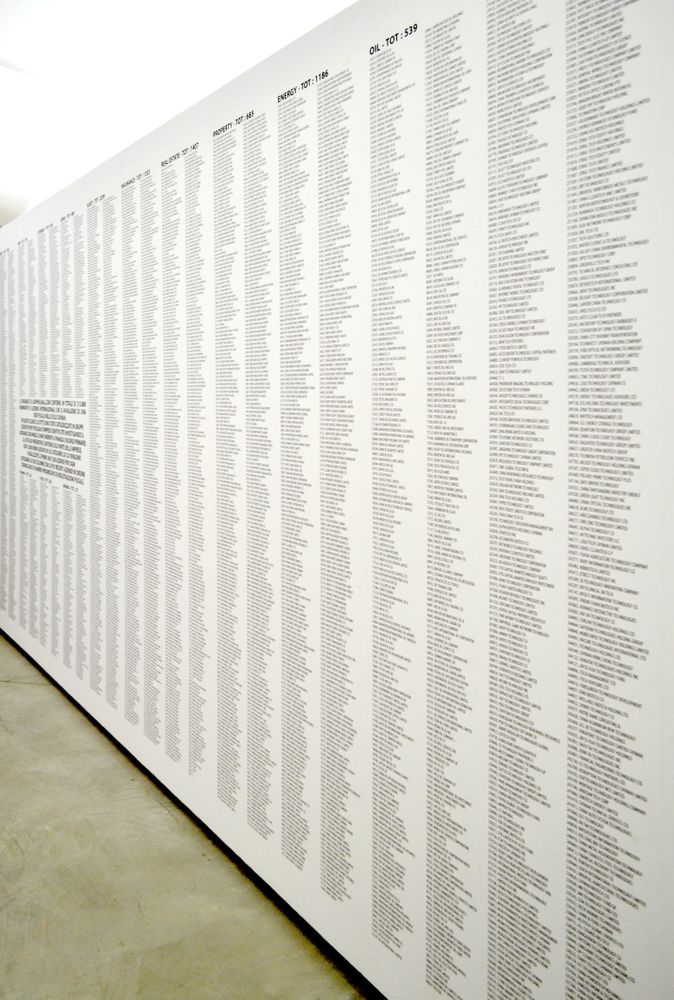 Paolo Cirio hacked the government website of the Cayman Islands company register to compile a list of all companies registered in the major Caribbean offshore center. He published the data for the first time, and then exposed it by digitally creating counterfeit certificates of incorporation for each company, all issued with his real name and signature.
The counterfeit certificates were published on the *Loophole4All.com* website, where everyone was invited to hijack companies’ identities by buying certificates of incorporation, starting at 99 cents, enabling them to avoid tax.
This massive corporate identity theft benefited from the legitimate anonymity of Caymans companies: the secrecy surrounding their real owners allows anyone to impersonate them. In short, this idea turned the main feature of offshore centers into a vulnerability, which was subsequently exploited by forging the certificates of incorporation.

This performance generated international media attention, engaged an active audience, and provoked outrage from authorities on the Cayman Islands, global banks, the companies’ real owners, international accounting firms and law firms. Ultimately the artist attracted ten international legal threats and two cease-and-desist letters against his artwork from Chinese companies.
Using aggressive business strategies to compete against the Caymans’ incorporation services, the project set up a scheme to publish the stolen information through a company incorporated in City of London (Paolo Cirio Ltd.) and a data center in California, while the identities of the Cayman companies were sold through Luxembourg via PayPal to route the profit from the sale to Cirio’s operational headquarters in Manhattan. The scheme took advantage of specific jurisdictions for legal liability, financial transactions and publishing rights. The artist used physical mailboxes in the Caymans, London and New York and set up most of the scheme using his passport, ultimately shielding his personal legal liability through his Italian citizenship.

After three weeks of selling the conceptual artworks in the form of limited editions of the companies’ identities, PayPal banned the account, claiming the sales activity was in violation of its acceptable use policy. This marked the end of the sale and the loss of the funds the artist had been able to collect to expand the project to other offshore centers.

The local Cayman Islands press reported on the project in two newspapers and national TV, interviewing the senior registrar of the Caymans’ companies register, who publicly downplayed the action and data leak and accused the artist of ”scamming people.” Meanwhile, a headline in Bermuda’s national newspaper warned that the artist could attack the country with the same strategy. The project has also been covered in major newspapers in Spain, Greece, Italy and beyond, in relation to the causes of the severe economic crisis that affected Europe.

Cirio considers *Loophole for All* to be a performance that has both a voluntary and an involuntary audience. Some owners of Cayman companies who had asked to be removed from the website became his involuntary audience, whom he then engaged through e-mail and telephone conversations. Many did not contact him directly but subscribed to the project’s newsletter using anonymous e-mail addresses or from the domains of global financial companies such as ey.com, hsbc.com, citi.com and kcs.com.
Another audience took part in this participatory civil disobedience voluntarily by buying services provided on the website. More than 900 orders were made on *Loophole4All.com*. The artist engaged conversations with many individuals who wanted to hijack companies to avoid onshore taxes themselves, to set up small offshore businesses or simply support the project’s cause. Another form of audience participation was the project’s viral nature, which generated a high level of traffic and attention by the threat to the Caymans’ financial secrecy and tax exemption.

An interactive element of the project included the investigation of the database, which received over 25,000 queries in the year since the its publication. Keyword searches revealed that many of these were made by the owners of companies, journalists, activists and just curious people. Ultimately, several media outlets have reported names of companies that were found on the database that Cirio compiled.

In addition, Paolo Cirio interviewed major tax-haven experts and produced a video documentary investigating offshore centers, exposing their social costs and suggesting solutions to global economic inequality. On the documentary section of the *Loophole4All.com* website, the artist also assembled a list of other uses for offshore centers apart from hiding assets and avoiding tax, such as misusing intellectual property or insuring high environmental and health risks. The list is the result of three years of the artist’s independent research into the subject.
Cirio’s artwork provocatively questions the transparency, secrecy and anonymity of the global financial industry, highlighting the mechanics of institutionalized illegality and the inequality of globalization, as well as some of the origins of austerity measures such as budget cuts in public services and jobs in western countries.

In particular, the website received significant traffic from India, Hong Kong, Singapore and China. Not coincidentally, these countries are frequently involved in offshore centers such as the Cayman Islands. Such offshore centers facilitate political corruption, misreport manufacturing costs and retail prices and obscure foreign investments as tricks to maximize profit from the development of these new economic powers. Yet the Cayman Islands is a UK- dependent Crown territory and can be considered the major offshore center for American and British companies during the last twenty years of the global expansion of neoliberalism.

The project’s paper trail is displayed in the offline art installation with prints of the documents of the scheme set up for the operation and thousands of the counterfeit certificates of incorporation, which can be taken away by the audience. Excerpts from the video documentary are displayed on one channel, while the second channel features excerpts from an interview with the artist and an introduction to the project. Ultimately, a list of a few thousand companies selected from the database is printed on a paper wall, giving a glimpse into the vastness of today’s global economy.
Supported by: EYEBEAM, Creative Times in NYC
Paolo Cirio (IT) is a provocative conceptual artist working with various media and domains. He works with the idea of shaping flows of social, economic and cognitive structures, and in doing so explores systems of distribution, organization and control of information.
Cirio’s artworks often engage power structures, global mass media and the general public in art performances that enact contemporary socio-economic conflicts. Owing to his artistic provocations Cirio has often been subject to investigations, legal and personal threats from governmental and military authorities, powerful multinationals and financial institutions, as well as from crowds of ordinary people. For instance, his controversial artworks have unsettled Facebook, Visa, Amazon, Google, the Cayman Islands and NATO, among others.
Cirio’s artworks have been presented and exhibited in major art institutions, including the V&A Museum, London, 2014, the Museum of Contemporary Art, Sydney, 2013, ZKM, Karlsruhe, 2013, CCCB, Barcelona, 2013, CCC Strozzina, Florence, 2013, the Museum of Contemporary Art of Denver, 2013, MAK, Vienna, 2013, the Architectural Association, London, 2013, the Museum of Modern Art, Rio de Janeiro, 2012, the National Fine Arts Museum, Taichung, 2012, the Wywyższeni National Museum, Warsaw, 2012, SMAK, Ghent, 2010, the National Museum of Contemporary Art, Athens, 2009, the Courtauld Institute, London, 2009; PAN, Naples, 2008, MoCA, Tapei, 2007, the Sydney Biennial, 2007, and NTT ICC, Tokyo, 2006. He has had solo shows at the Casa Gallery, Istanbul, Turkey, 2013, and at Aksioma | Project Space, Ljubljana, Slovenia, 2011 and 2013. Cirio has also curated panels series at The Kitchen, New York, 2012, and Eyebeam, New York, 2013.