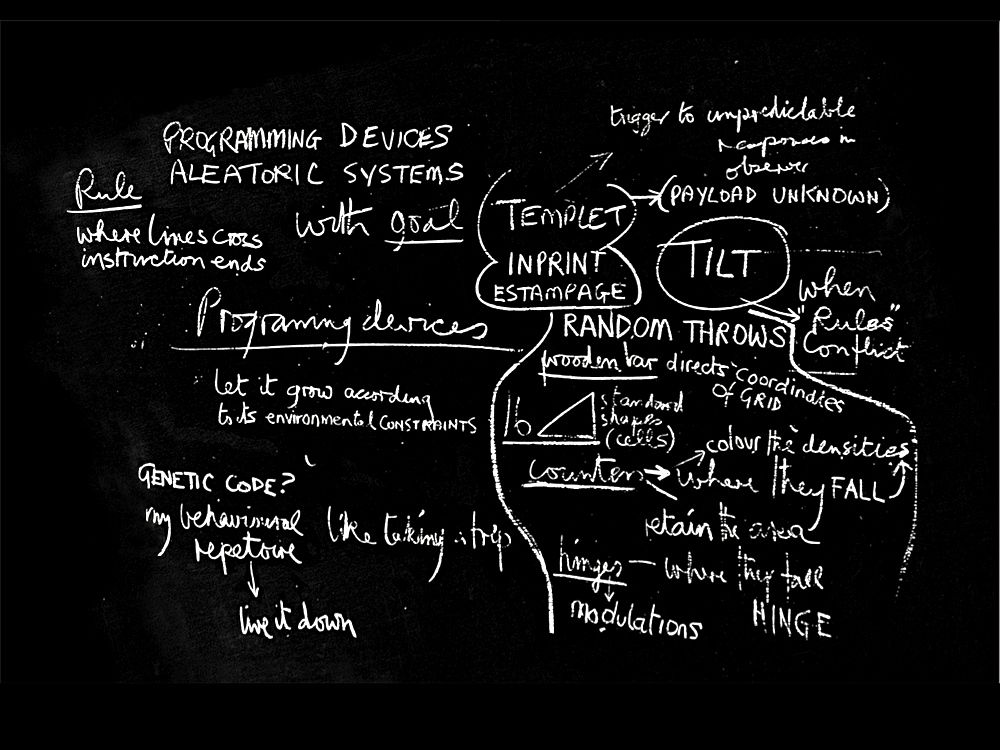 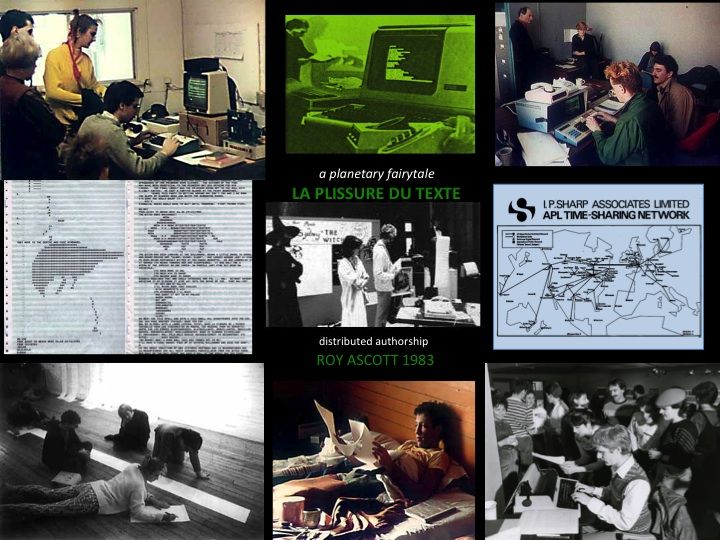 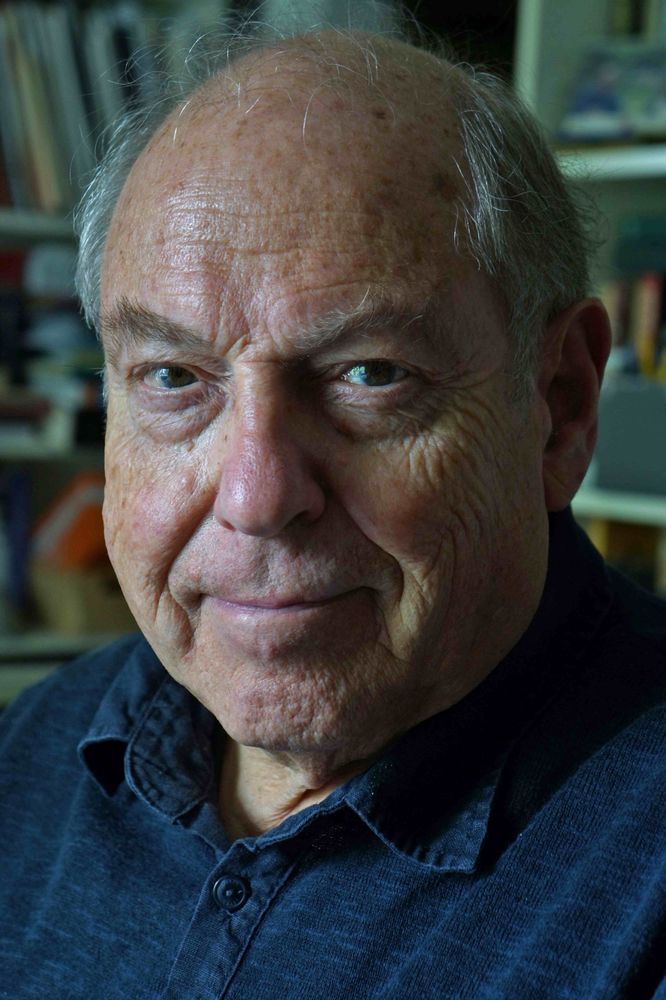 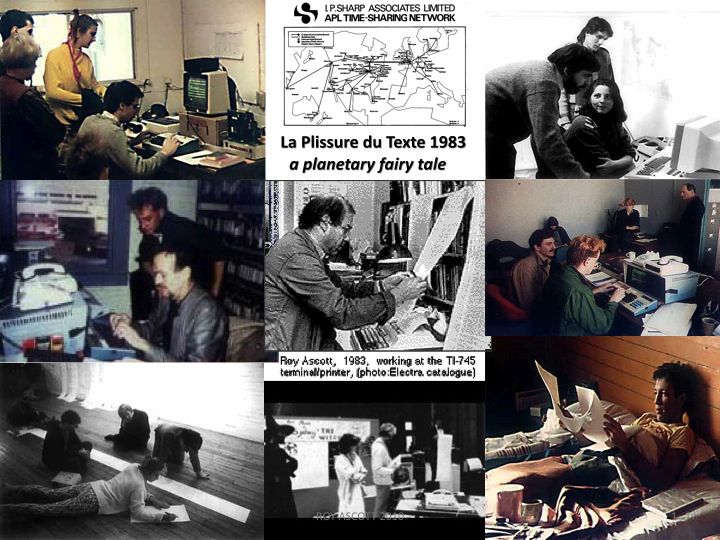 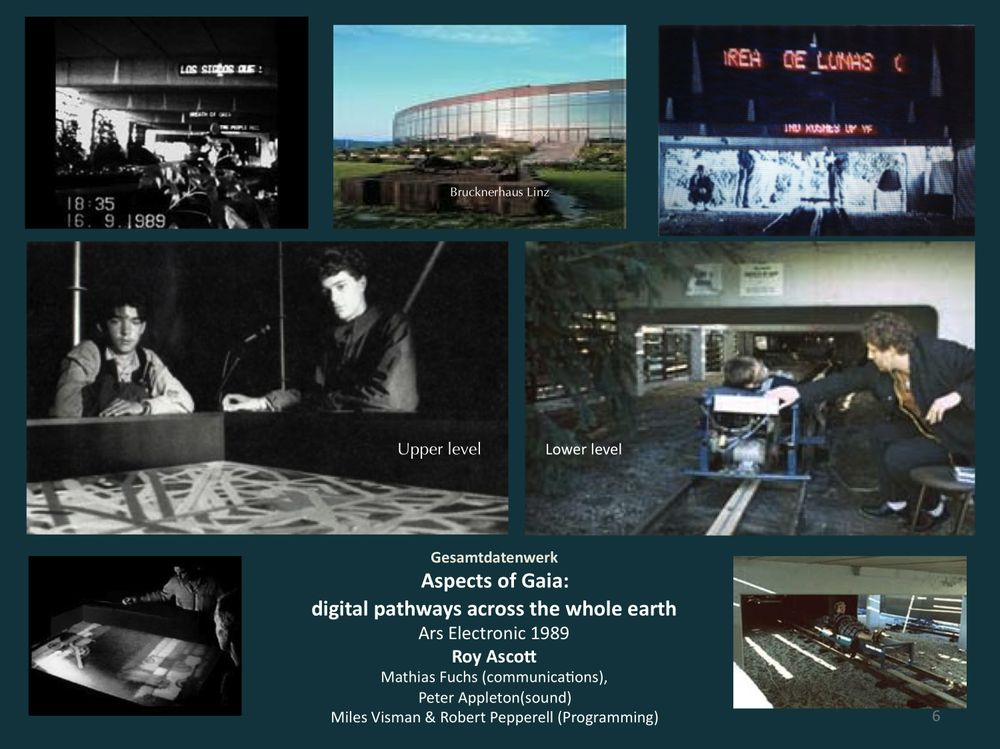 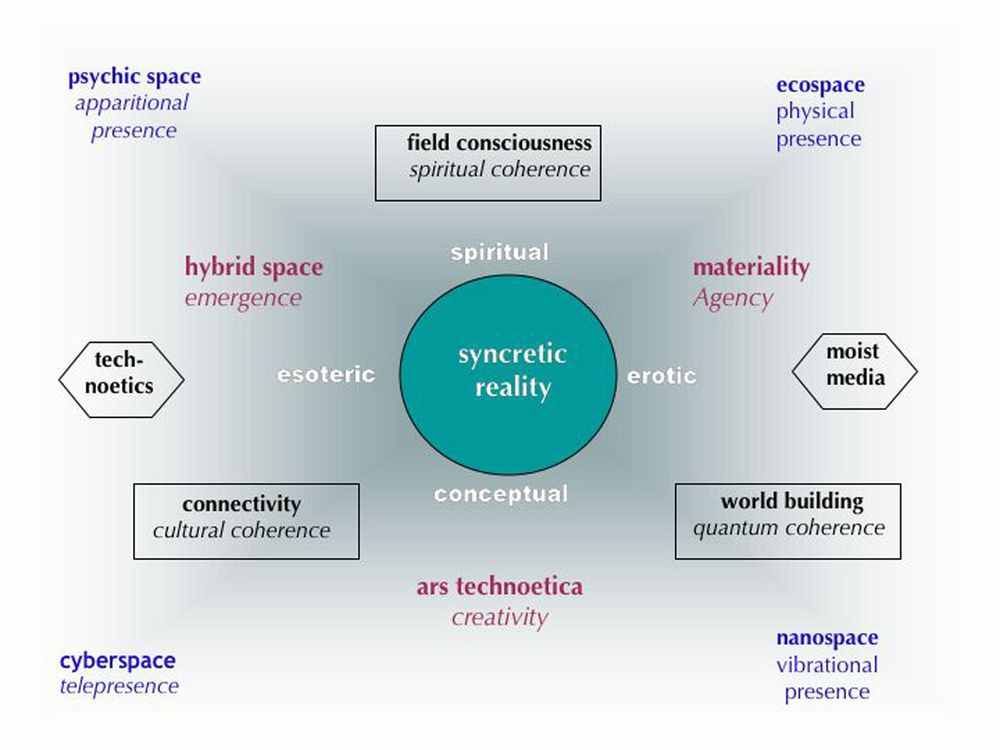 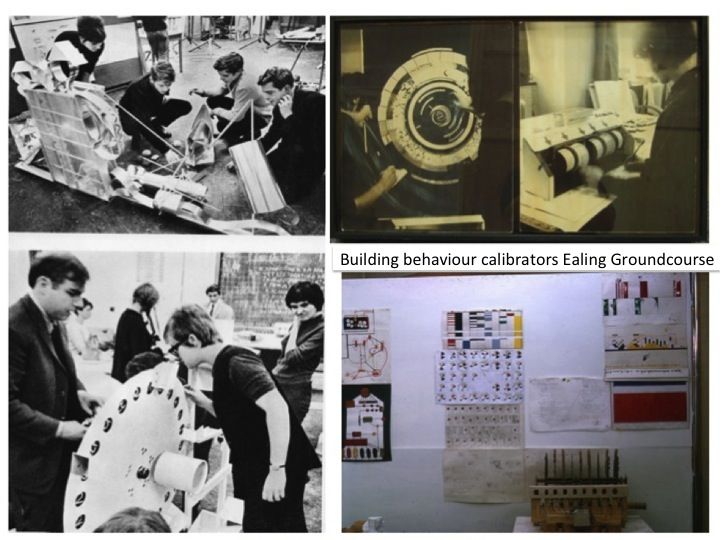 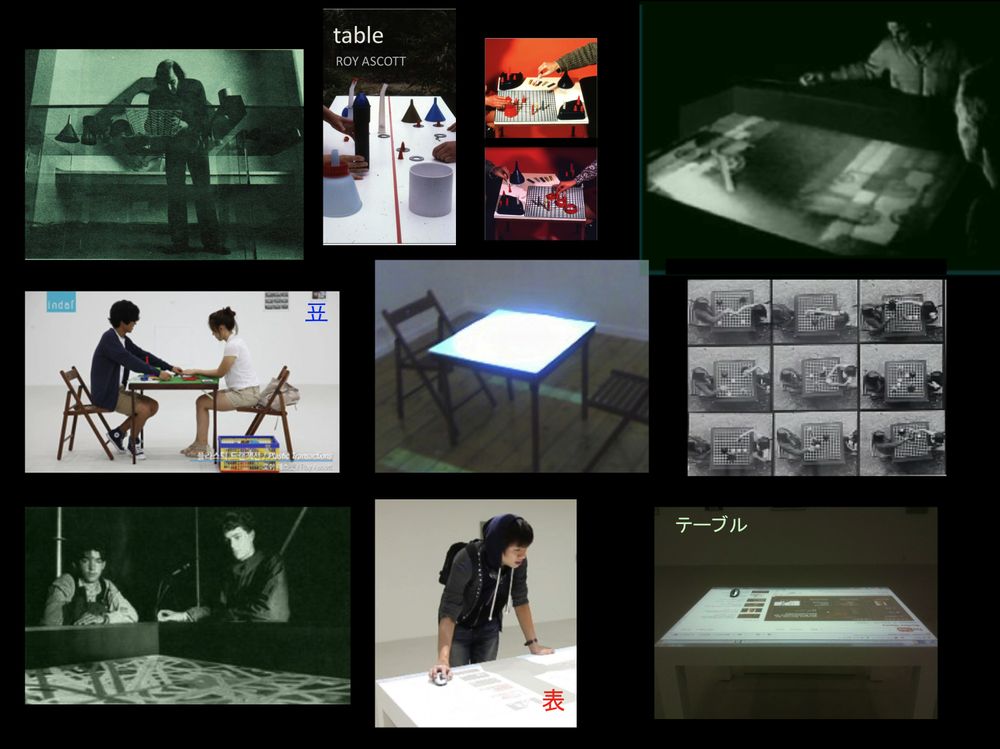 Although it was over twenty years ago, I clearly recall the first time I encountered the writings of Roy Ascott. It was for me, much like Roy described his first encounter (c. 1960) with cybernetics: “an Archimedean ‘Eureka experience’—a visionary flash of insight in which I [he] saw something whole, complete, and entire.” As an aspiring art historian who loved figurative painting but was equally ascinated by the recent emergence of the Web and interactive CD-ROMs, Ascott opened my mind to an alternative aesthetic framework that was radically different from the conventional one I knew. As he noted, the “recognition that art was located in an interactive system rather than residing in a material object … provide[d] a discipline as central to an art of interactivity as anatomy and perspective had been to the renaissance vision.” Ascott made it possible for me to imagine how emerging technological media were offering new tools with which the future of art would be developed, for he had been doing that for decades. Indeed, his praxis amounts to a substantial history of ideas in the field of media arts. But more importantly, his work extended beyond the realm of art or, rather, epitomized how art, at its best, could offer a model of possible futures that people could experience in the present. When I met Roy in 1994, I proposed editing a book of his essays, and though I had only completed my
first year of graduate school, he agreed. I could hardly believe it. Entrusting his work to me was one of the greatest gifts anyone has ever given me. That gift deeply influenced my own teaching method
and approach to life. And it resulted in the volume, Telematic Embrace: Visionary Theories of Art, Technology, and Consciousness (2003), which serves as an enduring testimony to Roy’s pioneering contributions to media art and contemporary art in general. I have since learned that Roy is widely known for his generosity. Indeed, throughout his career, Ascott’s generosity as an artist, scholar, and mentor has deeply influenced innumerable artists and theorists around the world, who have spread and expanded on his ideas, a rippling effect that has had an incalculable impact on artistic practice globally. Joseph Kosuth stated that “Art ‘lives’ through influencing other art, not by existing as the physical residue of an artist’s ideas. The reason why different artists from the past are ‘brought alive’ again is because some aspect of their work became ‘usable’ by living artists.”1 Extending this logic, Roy Ascott’s work is more alive today than it was in 1960 or 1990, and I envision that it will be more alive in 2020 and 2050 than it is today. In the spirit with which Roy entrusted me with editing a collection of his writings, and also in the spirit of “distributed authorship,” which is at the core of his theory of telematic art, I have entrusted some of his colleagues and former students with providing insights into his influence on their own work and on media art around the world. I am grateful for their generosity in sharing their perspectives and heartfelt sentiments.

Paul Thomas, Australia
I first met Roy Ascott telematically in 1983 through an art project created by Eric Gidney and Tom Klinkowstein using ARTEX (an early computing networking platform for artists). Roy was the inspirational visionary of the future who not only lived the dream but who gave that dream a reality in education. When he lectured in Perth in 1986, I knew I had found a guide that immersed me in a telematic-mentor’s embrace, and inspired my own telematic artwork You Send One (1987, with Neil Hollis and Benno Poeder). Roy’s ongoing visions for the future have been remarkably profound in creating aspirational perspectives for new understandings of life in which all aspects of being human are challenged and contextualized. These visions are generous, freely given gifts at the cutting edge of contemporary art practice and syncretic educational paradigms.

Jill Scott, Switzerland
I was one of Roy’s first doctoral students back in 1994 when he founded what is now the Planetary Collegium, but we first met the mid-1970s at the San Francisco Art Institute, where (much to the faculty’s amazement and consternation) he arrived as vice-president with evolved cybernetic views on education. Roy is unique thinker with a generous interest in nurturing artistic research and in the deeper questions of representation, reality and consciousness. In 2004 we collaborated on the forming of Z-node, a research arm of the Planetary Collegium, based in Zurich (www.znode.net). We now have three groups focused on cultural themes that relate to discoveries and discourses in science labs and the Z-node has graduated a dozen PhDs, who extend Ascott’s aesthetic and pedagogical theories around the world.

Gilbertto Prado, Brazil
Ascott’s important appearances in Brazil include Arte no Século XXI (1995) at the Museu de Arte Contemporânea/Memorial da America Latina, São Paulo, and Invenção: Thinking the Next Millennium at Itaú Cultural (1999), São Paulo. A particularly synergetic moment was the expedition to Kuikuro’s tribe in Xingu National Park (1997) with the artists Tania Fraga, Malu Fragoso, Diana Domingues, and myself, introducing Ascott (the artistic shaman of cybernetic and telematic art) to the indigenous shaman of the rainforest, joining visionary practices and forging multicultural insights. Ascott’s pioneering work as artist/theorist/educator have influenced many Brazilian artists, researchers and PhD students at a myriad of institutions. His presence and participation in these trans- and intercultural dialogs has had vital relevance in the expansion of the field of art and technology in Brazil.

DooEun Choi, Korea
Roy Ascott’s insightful thoughts have inspired curators, theorists, and artists in Korea to find their own
paths to media arts. The Art Center Nabi in Seoul opened in 2000 with a collaborative telematic art event that he led to create a “mind bridge” between Korea and the global world. In 2002, his book Technoetic Art was published in Korean and became one of the bibles on media art, quoted by prominent Korean media theorists. Recently, a Korean university started a media art and humanities major
called “Technoetic Humanities,” borrowing Ascott’s term. His influence in Korea is not one-way but interactive and participatory; his interests in Korean culture and spirituality and writings regarding the
encounter with Korean shamans ignited our own culture as the spirit for the future art.

Peter Anders, US
Roy Ascott has been a life-changer for me. We were introduced at a Consciousness Reframed conference in the 90s at a time when I was questioning the materialistic bias of architecture. My PhD studies
with Roy at CAiiA-STAR at the University of Plymouth were the best educational experience of my life, leading me to presently develop a node for its successor, the Planetary Collegium, in the US. Roy is a crucial figure in the integration of art with science, one who has identified consciousness as the substrate of both. I remember a conversation in which he defined aesthetic as being what remains when all
sensible aspects of a work of art have been removed, which called to mind Buckminster Fuller’s definition of synergy as the difference between the whole and the sum of its parts. Both addressed material reality on a cognitive level and in this they express science and art as a product of spiritual endeavor.

Xiaoying Juliette Yuan, China/US
There is no better way to describe Roy Ascott‘s ambition and achievement than inspiring the world through his unique vision. Born with the mission of creating new knowledge, he became a pioneer of telematic art, and founded the unprecedented international platform for art, science, technology and consciousness research, the Planetary Collegium. With the foundation of the Technoetic Arts Institute at the Beijing DeTao Masters Academy, Ascott continues to innovate and challenge by introducing his vision and knowledge to China. As one of Ascott‘s PhD fellows, I consider him not only as an excellent professor and educator, an astonishing artist and theorist, but as a wise and lucid investigator of human mind and existence.

Jennifer Kanary Nikolov(a), Netherlands
Dear Roy, your ideas, your artworks, and your students have consistently produced intimidating and mouthwatering examples of artistic knowledge production, which continue to inspire and challenge young artists and scientists all over the world to embark on journeys of artistic research that are worthy of the visionary core of your excellent program.

1 Joseph Kosuth, 1969, Art After Philosophy, Studio International, www.ubu.com/papers/kosuth_philosophy.html
Cited 15 August, 2009
Roy Ascott is a British artist whose work over the past 55 years has sought to realize a vision of art that is cybernetic, telematic, technoetic, and syncretic. La Plissure du Texte (1983) made a seminal contribution to telematic interaction and distributed authorship (revisioned and exhibited internationally since 2011 in virtual world environments). Aspects of Gaia (Ars Electronica, 1989) combined the experience of telematic disembodiment with presence in physical space, a precursor of subsequent forms of telematic, hybrid media. Since 1961, he has shown in biennales and other major exhibitions in Venice, Shanghai, Seoul, Amsterdam, Paris and London, as well as galleries in Brazil, Colombia, Canada and many parts of Europe. His work is in the permanent collection of the Tate Gallery. He was an international commissioner for the 1986 Venice Biennale, initiating the Laboratorio Ubiqua, a comprehensive and interactive exhibition of new media art from around the world. Since the publication of his first theoretical work Behaviourist Art and the Cybernetic Vision in 1964, his writing has been translated in many languages, with books in Japanese, Korean and most recently in Chinese: The Future is Now, which updates his influential Telematic Embrace of 2003. Many of his neologisms — moistmedia, cyberception, telenoia — have entered the discourse of media art. As a teacher, he created the radical Groundcourse in 1960s London, based on cybernetic principles. He is the founding president of the Planetary Collegium, first established as CAiiA in 1994, and now based in Plymouth University, whose PhD graduates include many of today’s leading artists in the field of media art. He is also De Tao Master of Technoetic Arts at DTMA in Shanghai, charged with advancing research in art, technology and consciousness in China. (Source: Roy Ascott)