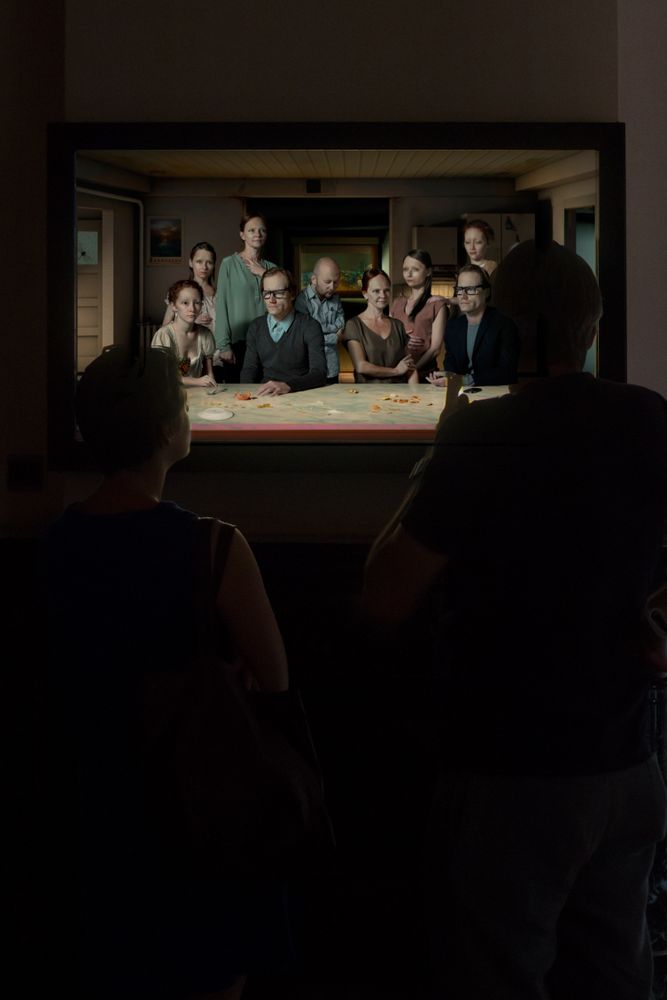 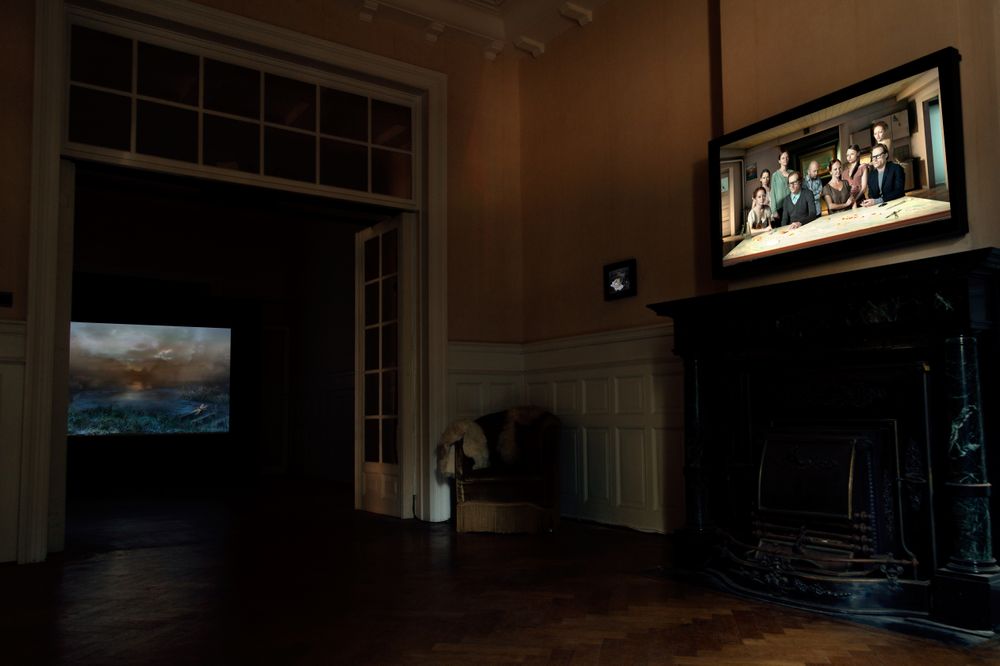 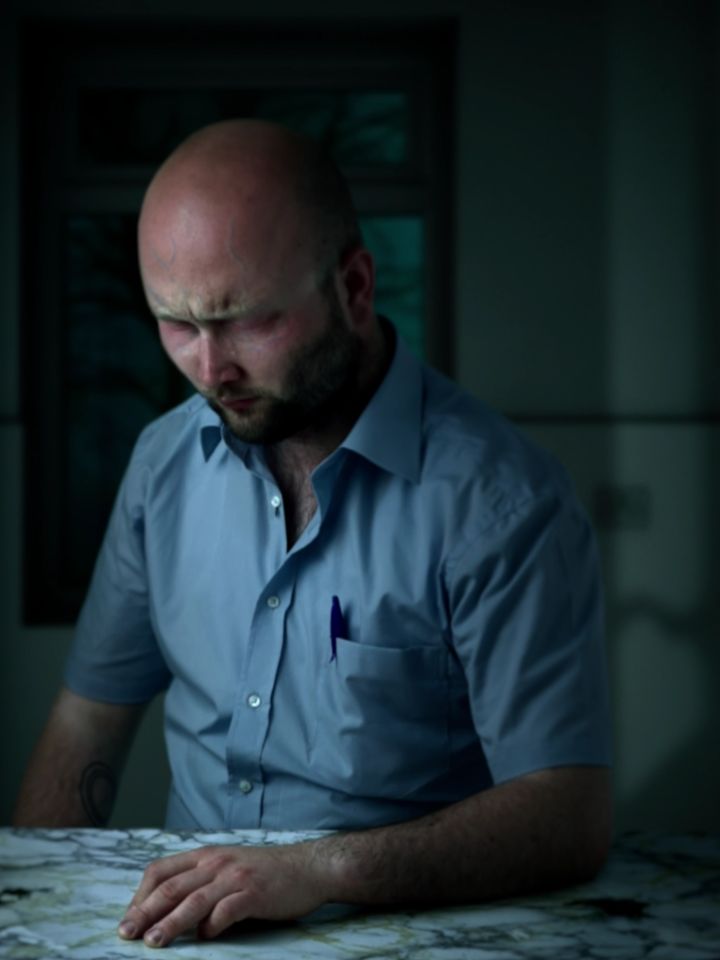 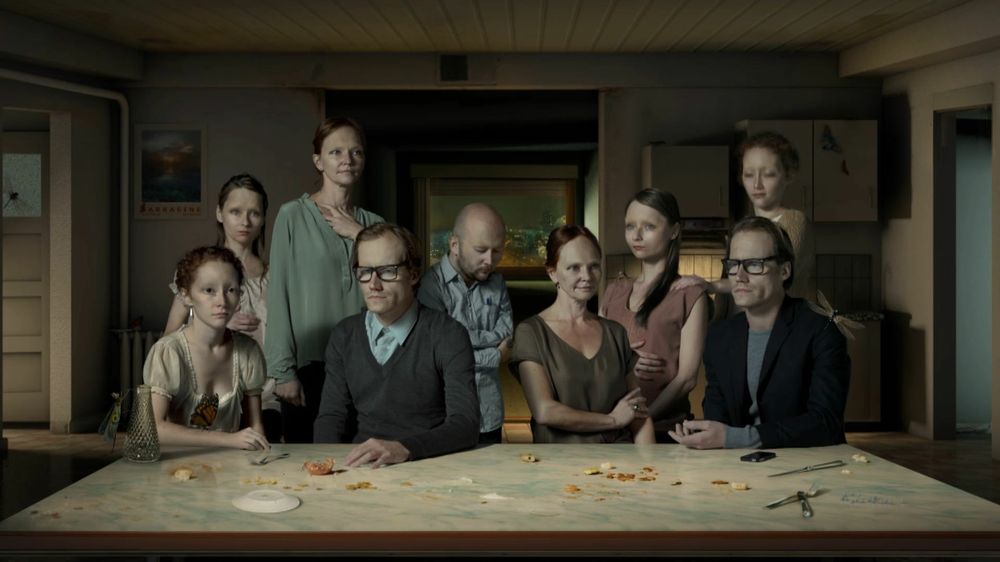 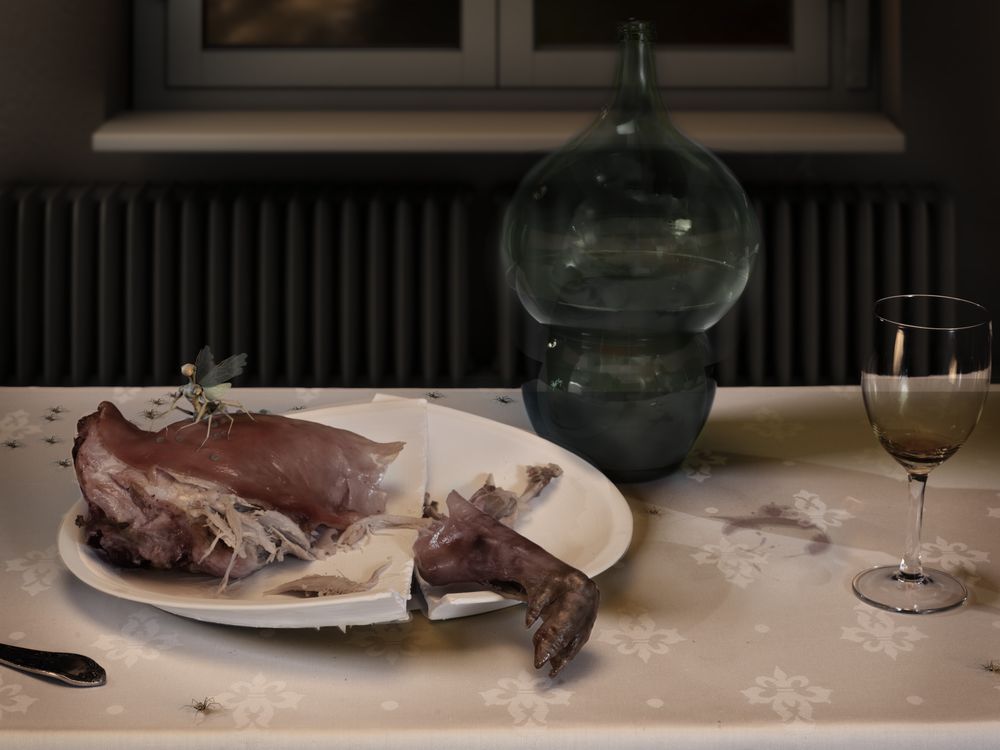 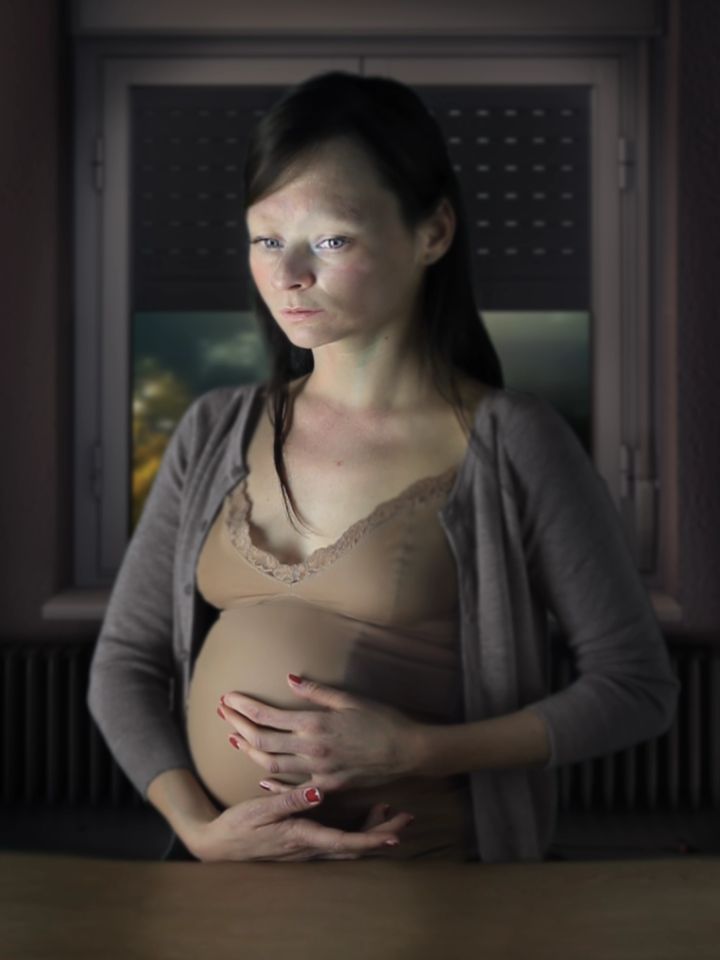 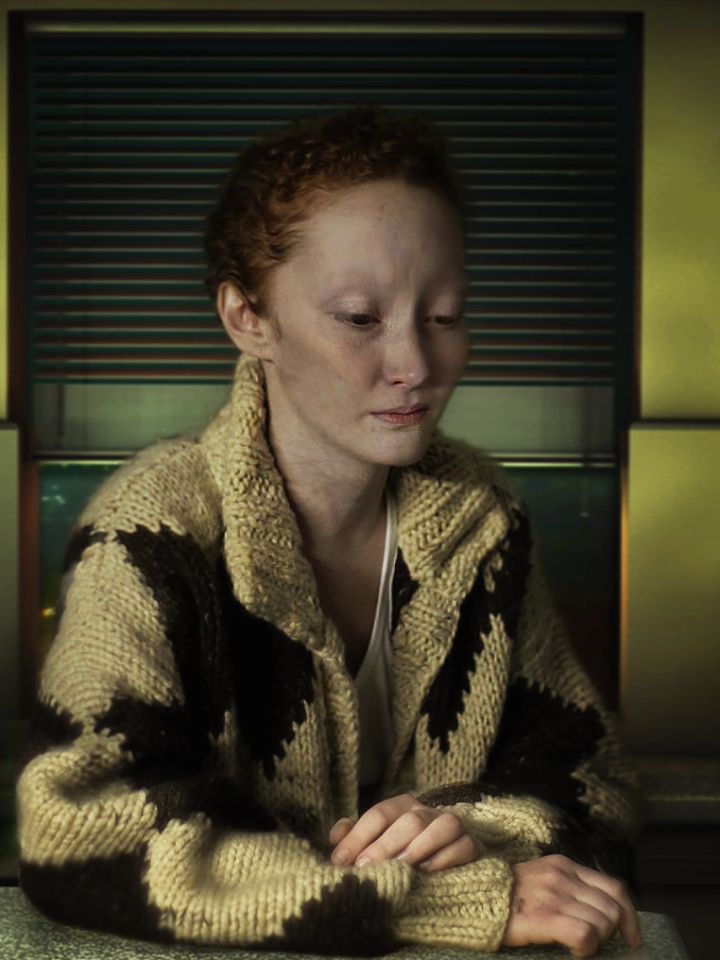 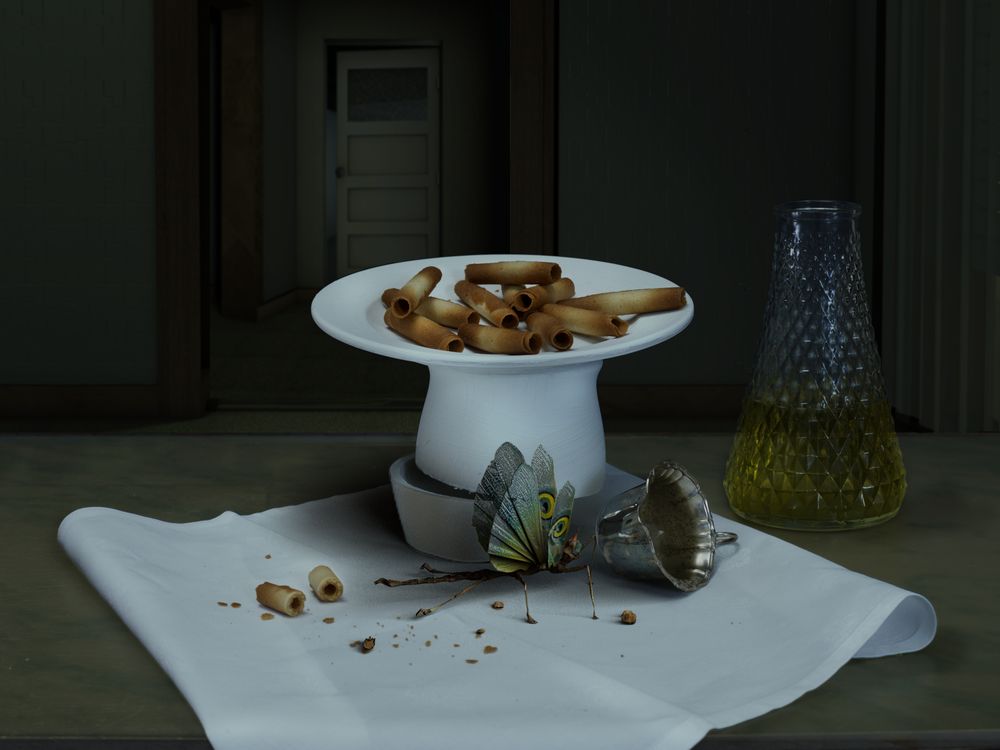 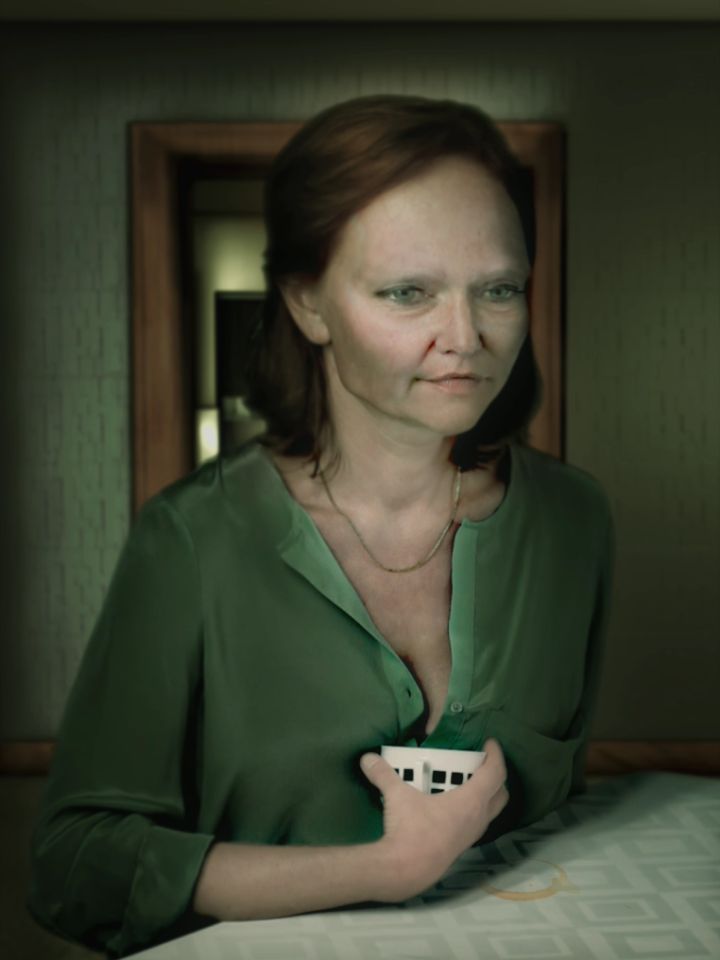 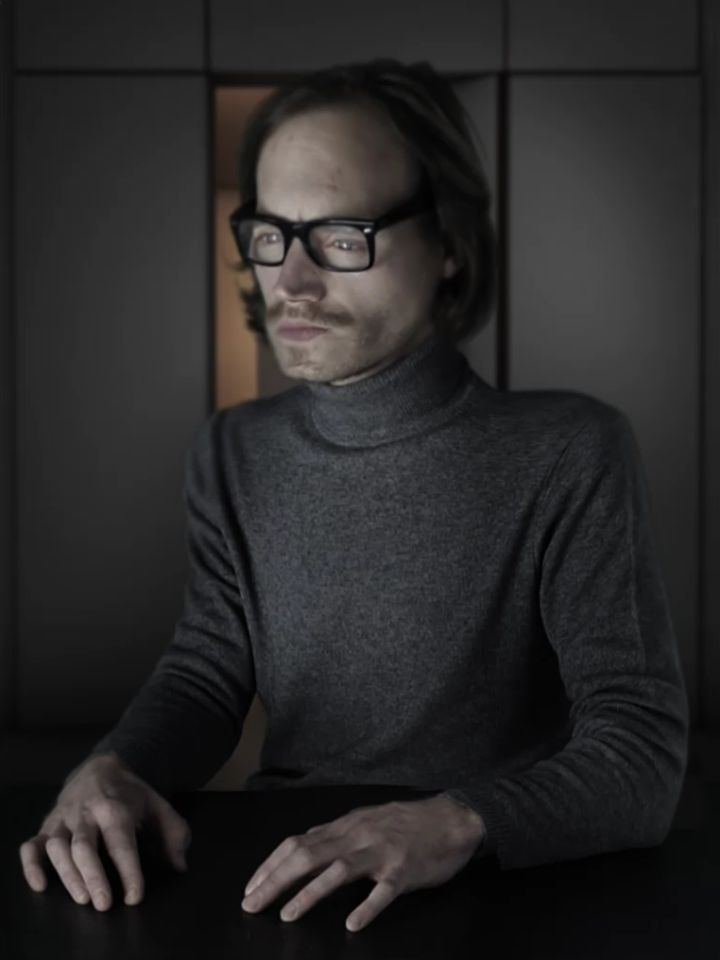 Original: Peter.tif | 720 * 960px | 2.0 MB | Peter.tif
Alex Verhaest’s works are visual explorations and investigations of the nature and boundaries of language, communication and social conventions and the potential of contemporary storytelling. The basis of each project is a narrative script, existing or newly written, around which she creates a body of standalone works by analyzing its storyline and exploring the limits of what constitutes communicable language. Her highly pictorial work operates by the juxtaposition of painting, video and contemporary technology.

The script of *Idle Times / Temps Mort* operates as the narrative backbone for a series of works on the suicide and character assassination of an absent *pater familias*, and the incapacity of the family members to communicate on, and to deal with this tragic event. The protagonists of *Idle Times/ Temps Mort*, the ‘mourning’ relatives (Hélène, Dolores, Peter and Madeleine) and the storyteller (Angelo) are introduced via a series of five Character Studies: a series of portraits that visualize the internal emotional struggle and inability of the surviving relatives to adopt an adequate attitude. Hélène is about to cry but she doesn’t. Is she trying to cry because she needs to, or because society expects her to do so? Dolores is pregnant and about to give birth to the first grandchild of the deceased father. Her portrait suggests a mental state which balances between salvation, expectation and disappointment and fear.
The character studies also operate as standalone works that investigate the pictorial, historical and psychological potential of portraiture. On the one hand the protagonists seem to operate in a timeless or even futuristic and parallel universe, on the other hand the aesthetics of the works refer to old master paintings (e.g. Cranach the Elder) and contrast with the technology and data carriers (Ipads) used for these works. The combination of these temporal aspects gives the works a universal and timeless yet very contemporary dimension.

This art historical dimension of the character studies is also present in another series of five works: the Table Props. Each character study corresponds with a so-called Table Prop. At first sight, these works remind us of classic still lives of Pieter Claesz and Willem Claesz Heda. A broken plate, a fallen glass, bread crumbs and leftovers suggest a hasty departure, or memento mori. Upon closer inspection, each Table Prop is literally a *tableau vivant*, a very subtle video loop without beginning or end. Table Props operate as allegoric representations of the protagonists of *Idle Times* and their mental states. Again, the combination of contemporary technology and classic themes results in an alienating visual anachronism.

*Idle Times / Temps Mort* also includes two interactive works, which engage the direct participation of the viewer and explore another aspect of Alex Verhaest’s work. Indeed, the title *Temps Mort/Idle Times* is derived from the feeling of missing out when using (or not using) a networked device, such as a smartphone or laptop. Verhaest feels that using a networked appliance generates a sort of buffered time zone, where her sense of time is suspended between physical presence in her environment at a particular moment and the time in which others send an e-mail or update their Facebook status. This caused her to reflect about layers in time, about our ever-failing relationship with it and the depth perception of memory as a container of the past and present.

*The View* is a life-size interactive animation loop. As the title of the work suggests, visitors are welcomed by a view: the view from an apartment located in an unknown city. Upon closer inspection the viewer is however confronted with (the reflection of) another person: Hélène, one of the protagonists of *Idle Times / Temps Mort*. Even though *The View* is not intended to deliver a specific ethical or philosophical message, it irrevocably questions the duality and relation between the Other and the Self and the concept of intersubjectivity.

*The Dinner* scene brings together all protagonists of *Idle Times*. The composition and setting of the work refer to a *Last Supper* scene. The relatives are represented twice, on the left and right of Angelo, the storyteller. The relatives are depicted before and after the suicide of the absent father. When the visitors call Peter (via a phone number given on a business card handed out during exhibitions), they activate a conversation, or at least a series of monologues between / of the family members. The relatives do not communicate or interact, they are making small talk to break the awkward silence. Even though Alex Verhaest takes a neutral stance on the usage of social media or networked devices, *Dinner Scene* does illustrate the discrepancy between the multitude of means to communicate and social platforms (which only allow for a binary state of mind: like/dislike) on the one hand and our inability to communicate and interact on complex state of minds and tragic events on the other.
Direction, writing, CGI and post-production: Alex Verhaest
Senior post-production assistance and compositing: Dustin Kershaw
Overall assistance: Sam Monballiu
Interaction design advisor: Bas Withagen
Recoding to html: Jean Joskin & Present Plus
Sound: Sonogents & Wouter Verhulst

Alex Verhaest (BE). During her MFA year, Verhaest traveled to China where she discovered the Asian hacker subculture. She was invited to participate in a six-month residency at the island6 Arts Center in Shanghai where she joined the former artist collective Platform for Urban Investigations. She then traveled to Mexico DF, Eindhoven and Salvador da Bahia where she participated in group shows by the collective at the Museo de la Ciudad de Mexico, the Van Abbe Museum and the Museo de Arte Moderna. In 2009 she decided to focus more on her own practice and to leave the collective, which resulted in participation in several group exhibitions around Belgium and the Netherlands. In September of 2013, her debut solo *Temps Mort / Idle Times* opened at Grimm Gallery, Amsterdam. She is currently represented by Dauwens & Beernaert, Brussels, and Envoy Enterprises, New York. Her work has been selected by several arts and new-media festivals and competitions; i.e. the FILE electronic language festival in Sao Paolo, the New Technology Art Award in Gent, TAZ Oostende and Arts Festival Watou, and her work is featured in the Akzo Nobel Collection. Alex Verhaest recently won the prestigious Japanese Media Arts New Face Award.