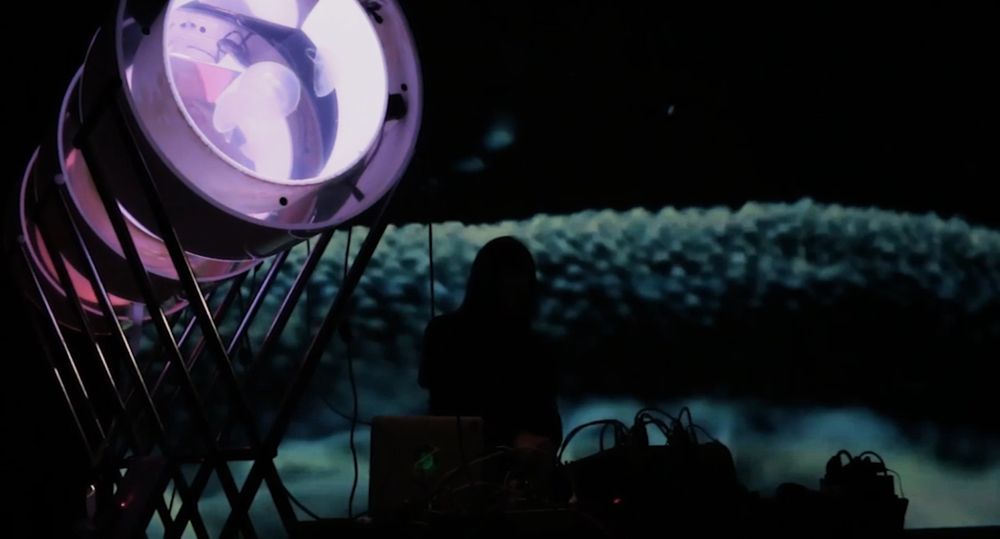 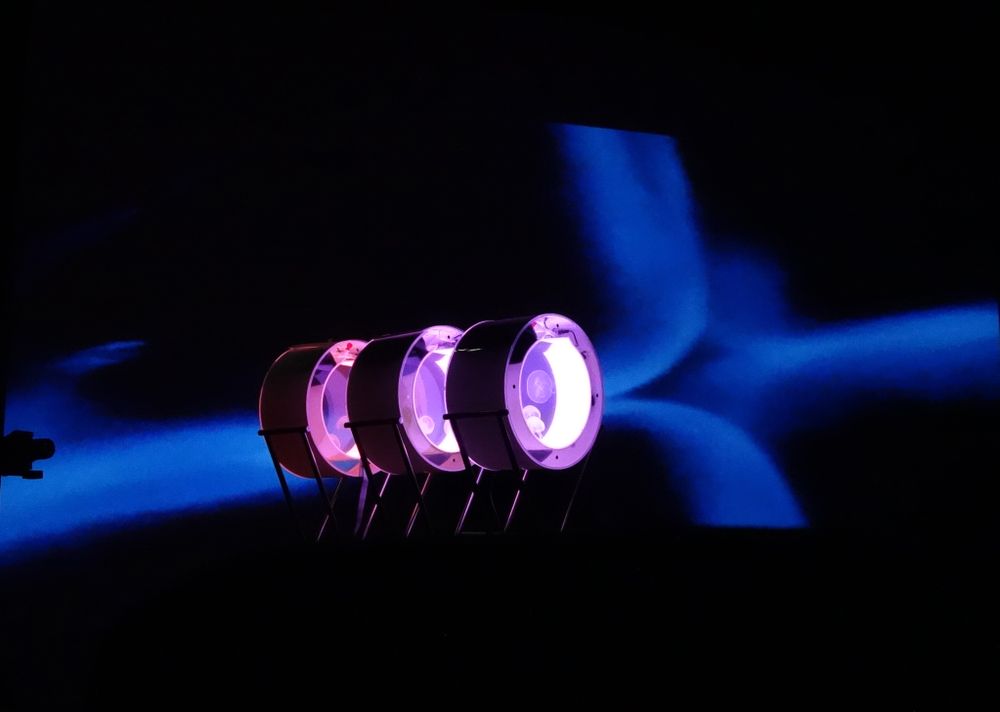 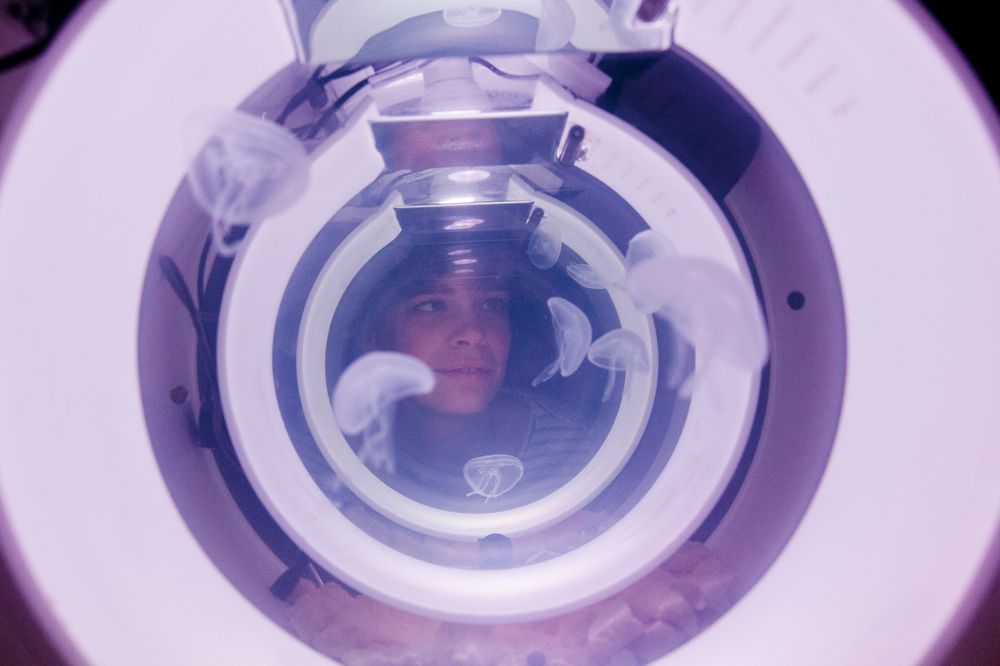 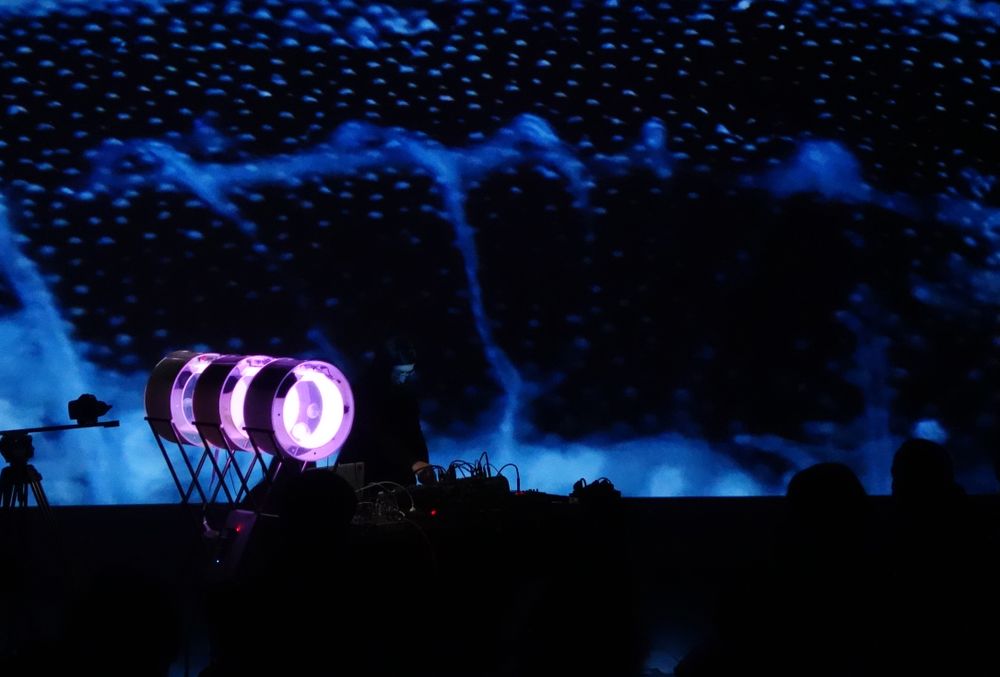 Original: Aurelia_1_Hz_proto_viva_sonification_by_Robertina_Sebjanic_and_Slavko_Glamocanin_-_photo_Le_Cube_01.jpg | 8679 * 5880px | 12.6 MB | Aurelia_1_Hz_proto_viva_sonification_by_Robertina_Sebjanic_and_Slavko_Glamocanin_-_photo_Le_Cube_01.jpg
*Aurelia 1+Hz / proto viva sonification* is an interactive performance that explores the phenomena of interspecies' communication, sonification of the environment, and the underwater acoustic / bioacoustics.
An interactive performance features live transmitted sound generated by *Aurelia aurita*moon jellyfish and performer. Sound loops contain recordings and sonic experiments of jellyfish in a closed environment and prerecorded from the jellyfish blooms in the sea. Both are mixed into a new soundscape score, which is assembled into immersive sonic and visual experience.

For over 500 hundred million years jellyfish have been pulsating in the world's oceans and seas. Nowadays, amidst the immense environmental changes, their numbers are rapidly growing. Jellyfish are one of the rare organisms that seem perfectly suited for the Anthropocene era. The current 6th Mass Extinction may not apply to them. There are several species of jellies (some of them immortal), however, it is not established (yet) how they communicate. Do they feel vibration?

*Aurelia aurita* has rudimentary sensory nerves at the base of its tentacles that allow it to perceive light, smell, and orientation. Its gravity receptors (calcium crystals) are the same as in the human inner ear. These sensitive structures provide positional information to the animal based on the direction of gravity. The odyssey into the exploration of interspecies communication is a way of discovering parameters to restore a deep relationship within all of life and it is a key to a better understanding of the earth's environment. The relationship between human and animal is a key to better understanding of the natural environment. Humans have a massive impact on other species and thus it is crucial to decode what they signal to us and how they see us.

“There are still songs to sing beyond mankind” by Paul Celan

The*Aurelia 1+Hz* project is divided in two parts. The *performance Aurelia 1+Hz /proto viva sonification* (2015) looks into a new critical redefinition of social values and new attitude towards the cohabitation of interspecies while the *installation Aurelia 1+Hz/proto viva generator *(2014) deals with the biopolicy of prolonging life and addresses the possible (biocybernetic) coexistence of humans, animals, and machines.

The performance contains a tracking system that follows the jellyfish and generates locative media. Jellyfish are tracked by the raspberry pi's camera that measures contraction, movement, and interaction between jellyfish. The data captured by the camera is transformed in real time into sound via an algorithm that generates sound using the recordings of previous experiments such as sound data of jellyfish that was produced during the project entitled *Deep Blue*, at the Institute of Marine Science and Technologies in Izmir, Turkey. The sound navigated by the performer / artist Robertina Šebjanič was gathered by hydrophones recording underwater jellyfish bloom on the shores of Izmir in February 2014.

Robertina Šebjanič (SI) is an internationally exhibited artist, working in the intermedia platform combining art – technology – science. For several years her focus has oriented towards cross discipline projects involving marine biology, underwater bioacoustics, chemistry...Her ideas and concepts are often realized in collaboration with others, through interdisciplinary and informal integration in her work. She is member of Hackteria Network, Ljudmila, UR Institute, and Theremidi orchestra. *http://robertina.net/*

Slavko Glamiočanin (SI) started in the computer 'demoscene', where he was mostly active in making music, co-creating the first Slovenian breakbeat compilation 'Monkorama', which contained his own creations as well. He continued with programming and exploring the media and for that purpose he created a programming platform *naprava*. After one-way video/effects he proceeded with interactive projects, motion capture, kinect and openGL visualizations. His main interests are synesthesia, complex systems, and interactive. *http://www.naprave.net/*