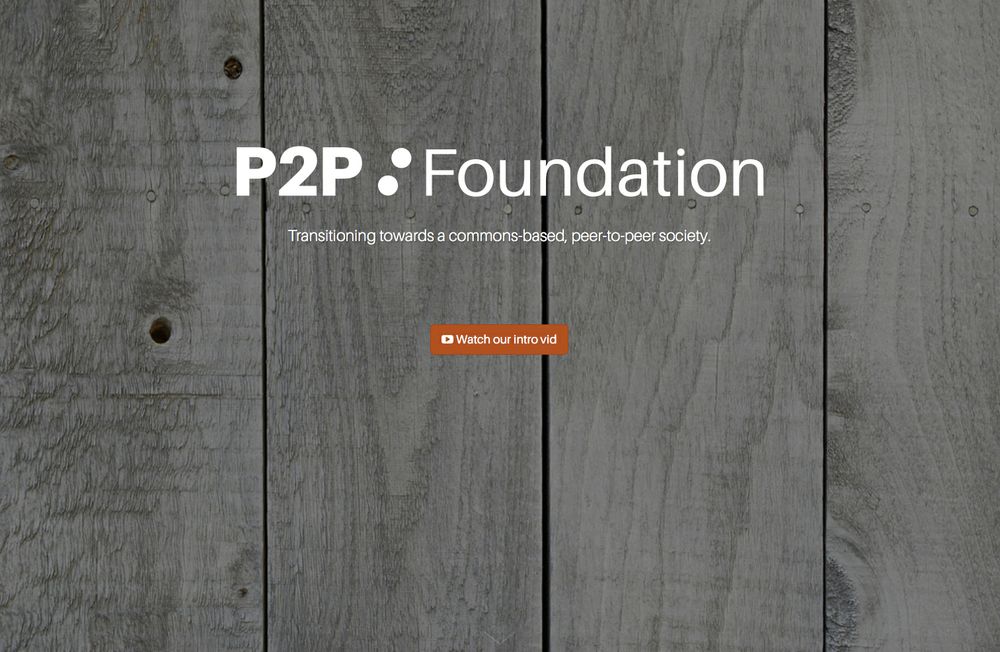 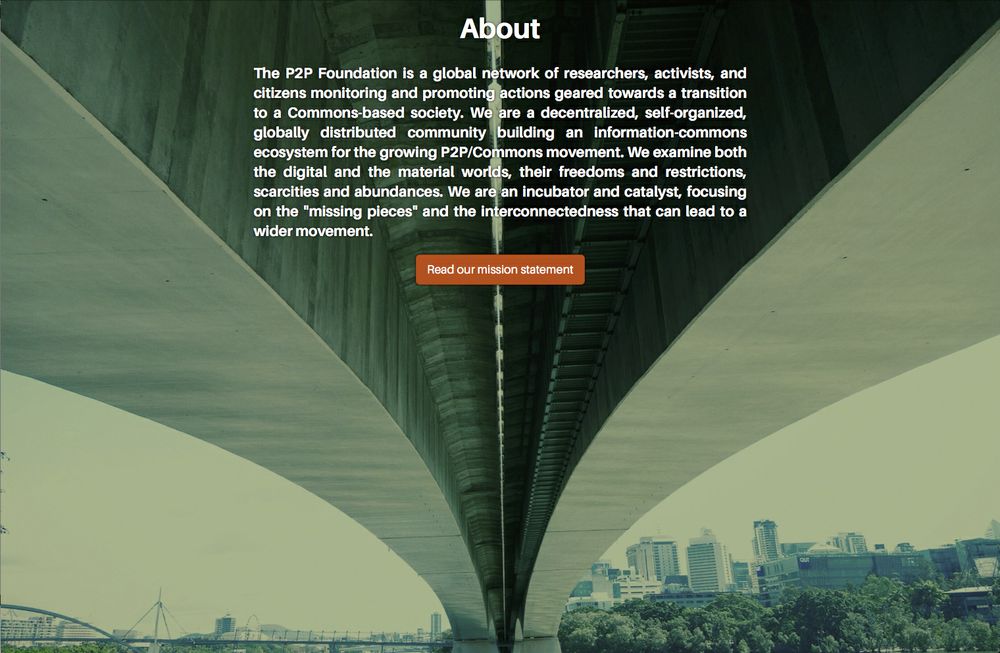 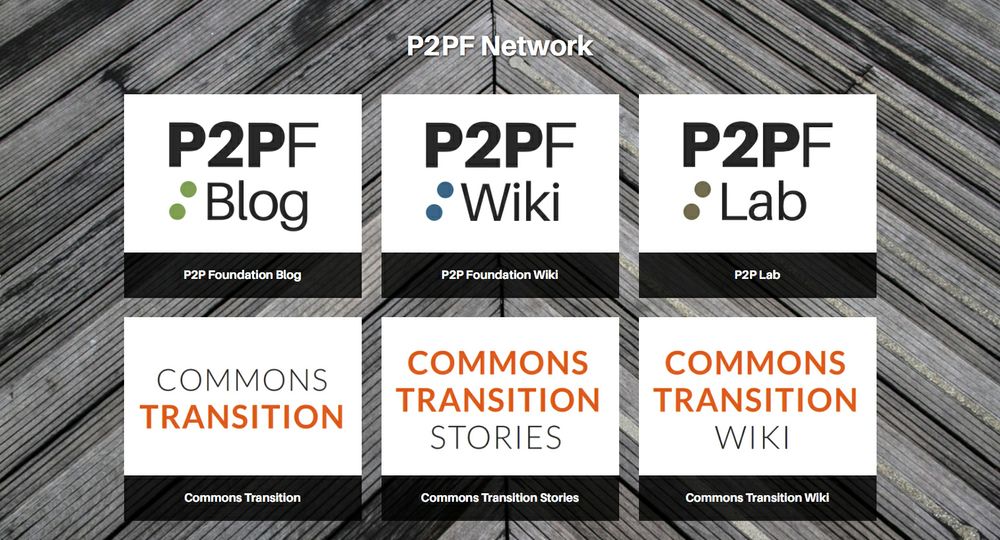 Original: DC_160134_220525_AEC_PRX_2016_P2P_screen3_2074672.jpg | 1515 * 819px | 792.5 KB
The *P2P Foundation* is a digital community creating an information-commons ecosystem for the growing P2P/Commons movement. This movement is concerned with the digital and the tangible, material, human worlds, including questions of their freedoms and restrictions, scarcities and abundances. Our community is a decentralized, self-organized movement whose interests include the political environment surrounding the networked society; the material, social and cultural realities of the sharing and collaborative economies and of alternative and crypto currencies; sustainability and “pro-sumer” practices countering planned obsolescence and artificial scarcity; and reclaiming democracy. In short the “peer to peer” world unites people in a cultural shift towards a more humane, fair, sustainable future.

Our primary aim is to be an incubator and catalyst for the emerging ecosystem, focusing on the “missing pieces”, and the interconnectedness that can lead to a wider movement. P2P, in practice, is often invisible to those involved, for a variety of cultural reasons. We want to reveal its presence in discrete movements in order to unite them in their common ethos. To do this, a common initiative is required which gathers information, connects and mutually informs people, strives for integrative insights contributed by many sub-fields, organizes events for reflection and action, and educates people about critical and creative tools for “world-making”.

P2P dynamics are most visible today in the many communities and movements self-organizing around the co-creation of culture and knowledge. Some of the most well known examples are: Free/Open Source Software, Free Culture and Open Hardware. These communities, values and practices are now also increasingly present in the world of physical production through open design, the sharing economy and co-working in hacker/ makerspaces and fab labs. These movements represent a cultural shift towards new kinds of democratic and economic participation that we believe are sowing the seeds for a more sustainable, egalitarian future. The *P2P Foundation* monitors the emergence of P2P dynamics in every field of human activity and encourages our community to engage with these topics in their lives. We help people, organizations and governments transition towards commons-based approaches to society through co-creating an open knowledge commons and a resilient, sustainable human network, as a digital community also engaged in offline action.

With more than 30,000 entries documenting the evolution of peer production, governance and property, our open, participatory (2,000+ registered users) P2P Foundation Wiki has been consulted over 27 million times since its launch in 2006 and is the most thorough knowledge commons for the P2P/Commons movement. Our recently overhauled main website is the popular *P2P Foundation* blog.

A more recent online resource is *Commons Transition*, originally conceived as a wiki for modified policy proposals from the FLOK society project, adapted to be more generally useful (non-nation specific). The *Commons Transition* team rethought the project and developed a broader set of tools with an eye towards expansion in both communications and advocacy. We see the changes in areas such as new economic models and value-measuring metrics as cultural shifts that can create social/cultural misunderstandings, fears, and vulnerabilities. The conversations enabled and hosted in our community (even the heated and unresolved ones) about new technology and its influence on culture (eg.Bitcoin / blockchain) expose people to debates that are well-informed and backed with documentation via our online resources.
The P2P Foundation was conceived ten years ago to help people, organizations and governments transition towards commons-based approaches to society through co-creating an open knowledge commons and a resilient, sustainable human network. Between the paradigms of the network and the organization, the *P2P Foundation* exists as an “organized network” which can facilitate the creation of networks, yet without directing them. The *P2P Foundation* consists of a foundation registered in the Netherlands with three operational hubs dedicated to organizing, advocacy, research and creating a knowledge commons; a network of activists and researchers working at different levels of engagement, a small core team for strategy and sustainability, and countless members engaging with and contributing to our information commons. The *P2P Foundation* work was begun and to a large extent is still led by founder Michel Bauwens through outreach, lecturing, writing, publishing and online documentation. The *P2P Foundation* is the umbrella organization under which *Commons Transition* and the *P2P Lab* operate interdependently.
Ann Marie Utratel is part of the core team at the P2P Foundation, focused on communications and project organization. She also works on the Commons Transition platform, web magazine, and associated projects, and on the P2Pvalue project. Additionally, she’s the co-founder of Guerrilla Translation.
Links: http://blog.p2pfoundation.net
http://p2pfoundation.net