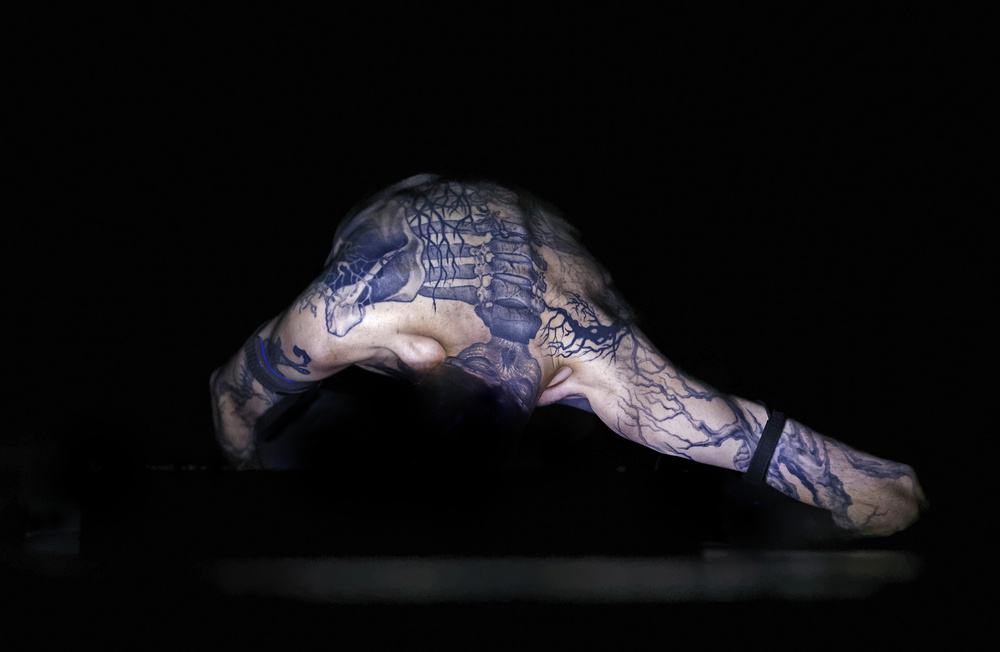 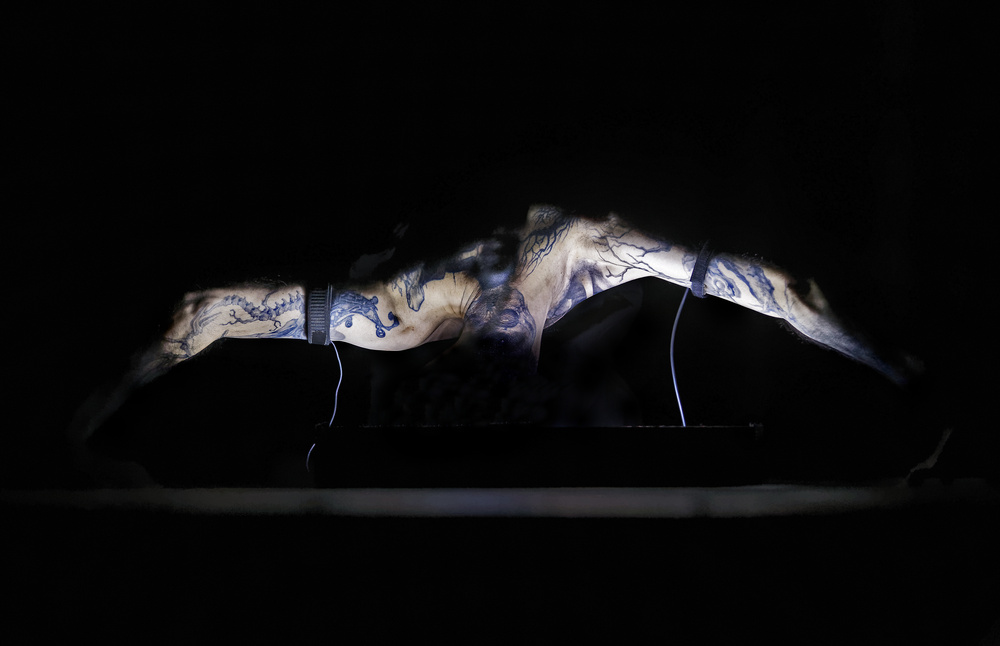 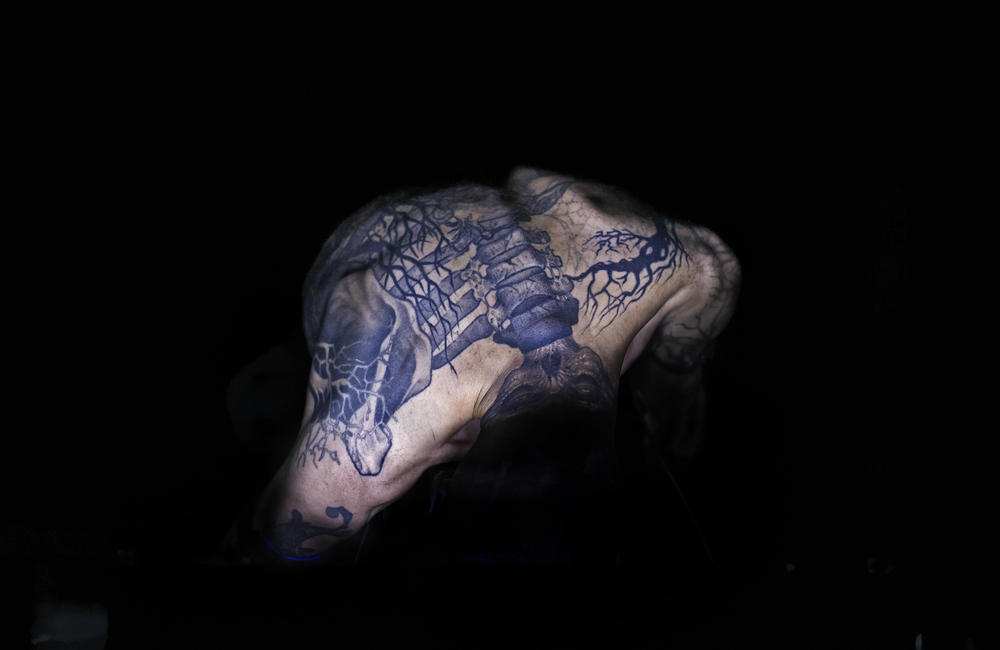 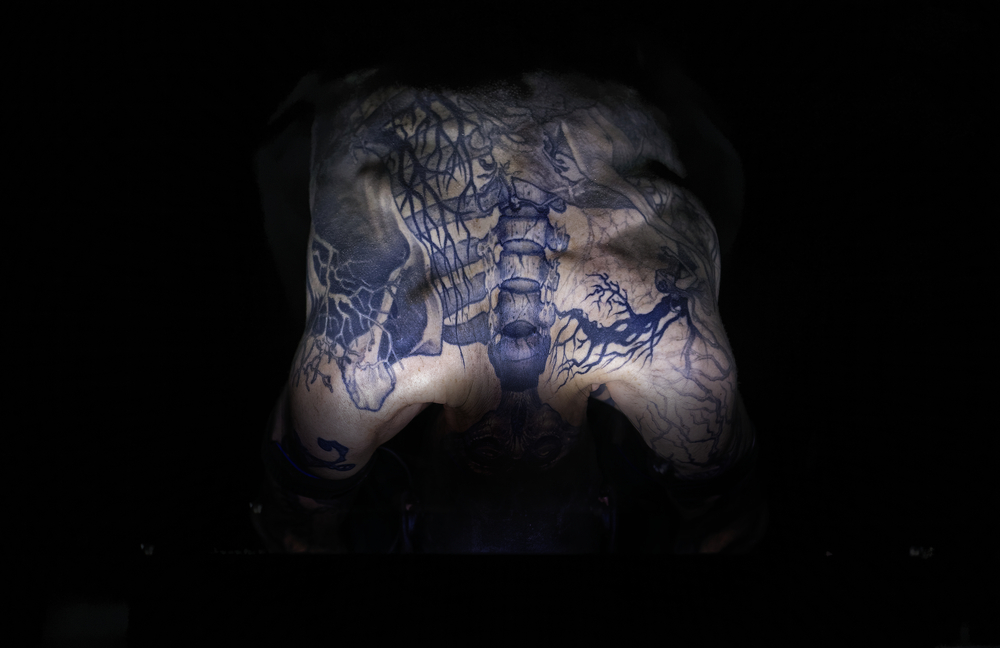 Original: DM_170666_227197_AEC_PRX_2017_CoprusNil_02_2401756.jpg | 5156 * 3341px | 10.5 MB | Marco Donnarumma performing Corpus Nil. Still from live performance. | Courtesy of Onuk and ZKM Center for Art and Media, Karlsruhe, 2016.
*Corpus Nil* is a music performance exploring hybrid forms of identity and musicianship. It does so through an intense and ritualistic interaction between an artificially intelligent musical instrument, a human body, and sound.
The space is completely dark. The player, whose body is partly naked and partly painted in black, performs a tense choreography that gradually morphs his body. Two types of wearable biosensors transmit data from his body to a software. Chip microphones capture sounds from muscles and internal organs (mechanomyogram or MMG) and electrodes capture muscle voltages (electromyogram or EMG).
The instrument uses special filters to generate a description of the amplitude and frequencies of all sounds produced within the performer's body (between 1-40 Hz), as well as their variations over time. Then, it re-synthesizes those sounds by orchestrating a feedback network of twenty digital oscillators. Because the choreography demands slow, subtle, and iterative physical movements, the resulting music is equally slow and recursive, mutating across microtonal variations of a minimal set of pitches.
The instrument also analyses the collected data to learn the nuances of the performer's movement (muscular tension, gesture abruptness, rate of relaxation). Upon observing a certain nuance, the instrument chooses whether to mute or activate particular oscillators, how to regulate volumes, phases, glissandos, and multi-channel diffusion, and how to adjust feedback amounts within the network.
The player cannot control the instrument, but only learn how to affect it and be affected by it. The piece discards conventional performer-instrument relationships - founded on the performer's full control of the instrument - in favor of an unstable corporeal engagement between the two.
Through the rhythm of sound, vibration, and light, the performer's body and the instrument mutate, physically and conceptually, into something "other"; an unfamiliar creature defying common definition of the human.

Photocredits:
Marco Donnarumma performing Corpus Nil. Still from live performance. Courtesy of Onuk and ZKM Center for Art and Media, Karlsruhe, 2016.
Marco Donnarumma (IT/DE) is an artist and scholar living and working in Berlin. A unique presence across contemporary performance and media art, Donnarumma distinguishes himself by his use of emerging technology to deliver artworks that are at once intimate and powerful, oneiric and uncompromising, sensual and confrontational. Working with biotechnology, biophysical sensing, as well as artificial intelligence and neurorobotics, Donnarumma expresses the chimerical nature of the body with a new and unsettling intensity. He is renowned for his focus on sound, whose physicality and depth he exploits to create experiences of instability, awe, shock, and entrainment.