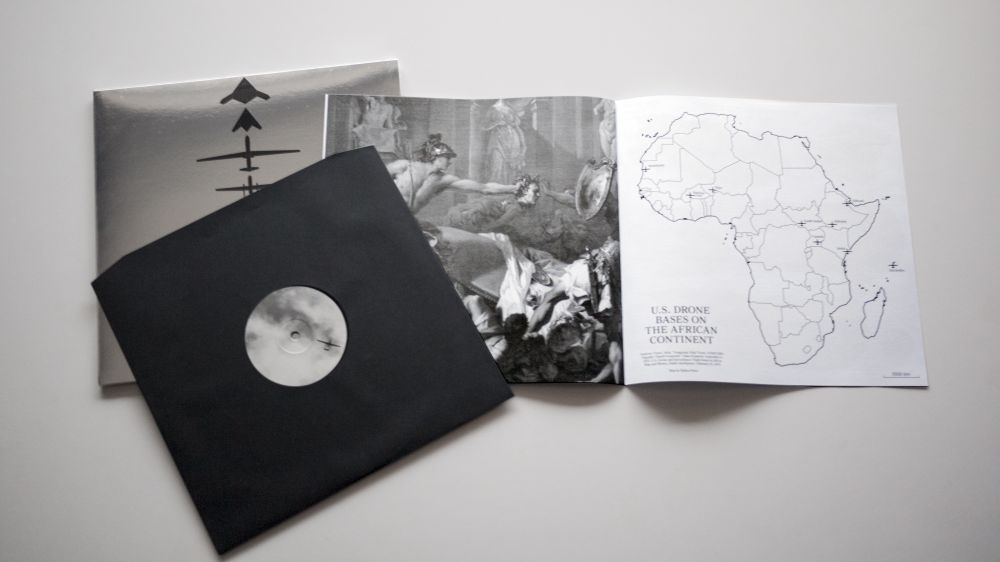 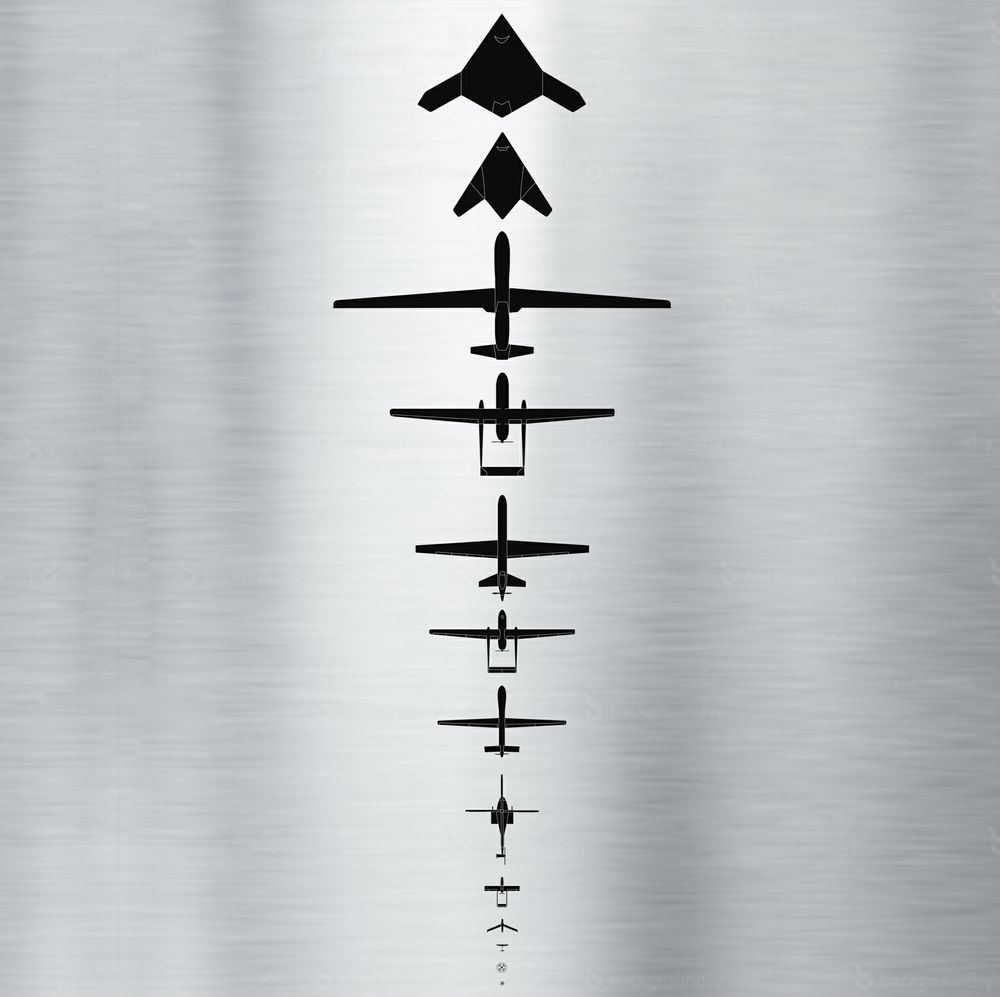 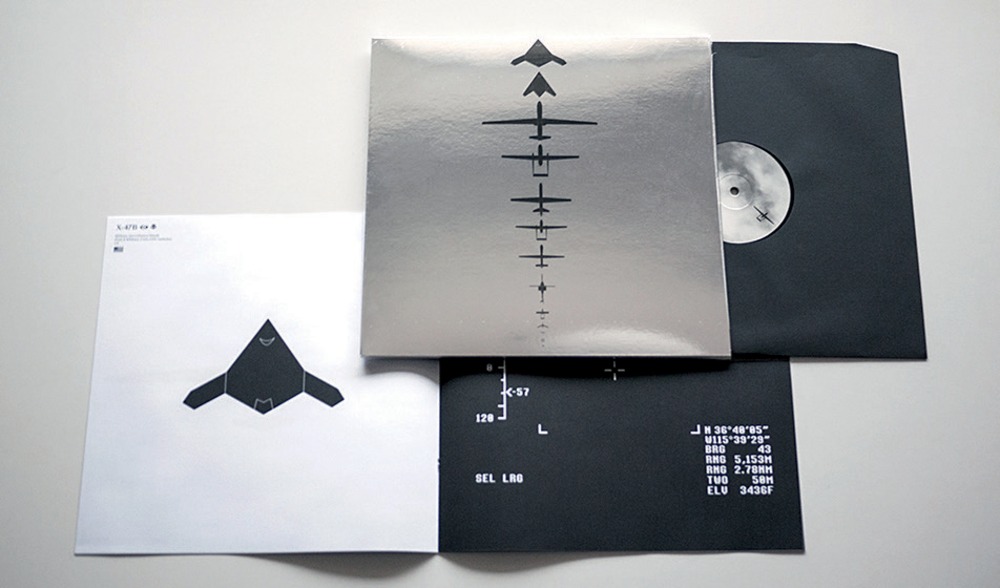 Original: HA_170879_228089_AEC_PRX_2017_astudyinto21st_2412003.tif | 952 * 560px | 1.6 MB
Much attention is focused on drones as 'eyes in the sky'. However for people on the ground, the sound of the drones is much more pervasive. Military drones fly at high altitudes and are more often heard than seen. The word drone itself is rooted in sound, referring to the noise of the male honeybee. The sound of drones in areas of conflict create frightening soundscapes that go on for many hours on end. The sound gives them nicknames like Zanana (buzz) in Palestine.

In this project, designer Ruben Pater (*Drone Survival Guide*) and composer Gonçalo F. Cardoso (Discrepant) join hands to focus on the auditive aspects of drones. What engines do drones have, and what do they sound like? Released in 2016 as an LP record, Side A features recordings of 17 drone types, ranging from small consumer drones to large military drones, as contemporary bird songs. The B side presents a soundscape by Gonçalo F. Cardoso, inspired by the abusive and destructive power of drone technology. The composition focuses on the conceptual (sound) life and death of an aerial drone machine in the 21st century.


Our ancestors could tell a lot from looking up at the sky. Spotting and recognizing birds provided crucial information about the weather, where to find food, and if predators were near. In the twenty-first century landscape, knowledge of the natural environment has become our knowledge of technology. Most of us cannot tell the difference between the call of an osprey and a hawk, but we can tell the difference between a Samsung and an iPhone ringtone. We have grown so accustomed to technology, that we perceive it as our natural habitat.

Unmanned aerial vehicles (drones) will become ubiquitous in our new habitat. The U.S. Federal Aviation Administration (FAA) predicted that in 2030, 30,000 commercial and government drones could be flying in US skies. The military seems to anticipate this changing relation with nature and technology in naming its drones: Global Hawk, Heron, Killer Bee, Mantis, Predator, Reaper, Raven, Sentinel, Scan-Eagle, etc. Electronic birds hovering in the air, circling over warzones, until they spot their prey and attack.
It is important that we learn to identify drones, by sight and by ear, and adapt to this changing environment. But we also have to learn their behavior. A drone is remotely controlled by its pilot via satellite link. When the link with the pilot is lost, a drone can behave erratically or unethically, and become a danger to friend or foe. (…) Drones can be used for many peaceful purposes. They prevent poaching, fly peacekeeping missions, and save lives as medical drones. Technology in itself is neutral, and it is up to us to decide what is morally acceptable.


When I first got acquainted with the *Drone Survival Guide* project, I was immediately attracted to it, with its perfect balance of conceptual art and social awareness. This promised to be fertile ground to develop the idea into a more sound-based study. It was not obvious to find a healthy approach to such a delicate issue. How to avoid glamorizing military equipment or the over saturated clichéd sound of bombs and explosions to an Arabic Duduk backdrop. I decided to filter the piece through a musique concrete ethos. A heavy emphasis on sound design and electro-acoustic techniques so as to suggest a vivid musical story-line, a conceptual soundscape (…).

A common thread throughout the piece is the ‘abuse’ factor running through the track–the abuse drones have come to represent: abuse of privacy, abuse of life, abuse of basic rights, such as sovereignty of your country or region. I tried to explore this feeling by abusing my own tools: synths, computers, radios, guitars, samples. Every instrument or sound that you hear on the composition has been abused in some way or another, either by analogue and/or digital processing or by simply provoking the instruments to create sounds they weren’t meant to.

Ruben Pater (NL) is a designer and researcher. He finished the master program at the Sandberg Instituut in 2012, and he works on self­ initiated and collaborative projects between journalism and graphic design such as ‘Untold Stories’ [*http://untold-stories.net*](http://untold-stories.net "http://untold-stories.net"). Past projects are *Double Standards* (2012), *The Drone Survival Guide* (2013), and the *Politics of Design* (2016). His work has received several international awards and is featured in exhibitions around the world.

Gonçalo F. Cardoso (PT) is a London based Dj and sound artist. He started the label Discrepant [*www.discrepant.net*](http://www.discrepant.net "www.discrepant.net") as a platform to release and diffuse his work and those of like-minded artists. He releases music under the Papillon moniker as well as Gonzo and has released works by the likes of Kink Gong, Mike Cooper, Cedric Stevens, Ergo Phizmiz, Mutamassik, Meridian Brothers and many others. The label aims to deconstruct, distort, and re-assemble the lore of (un)popular music.