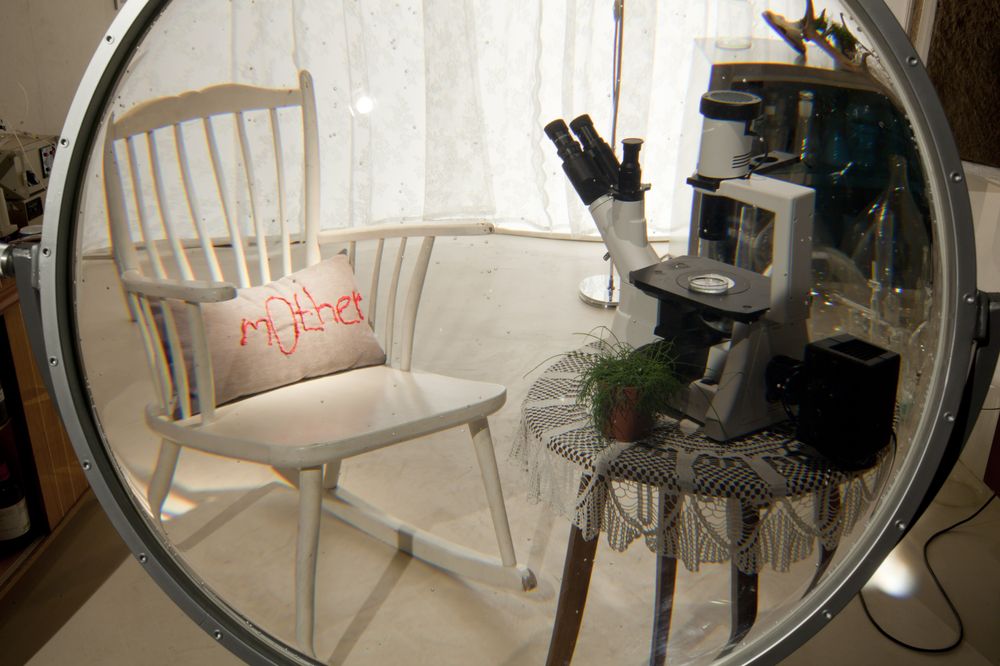 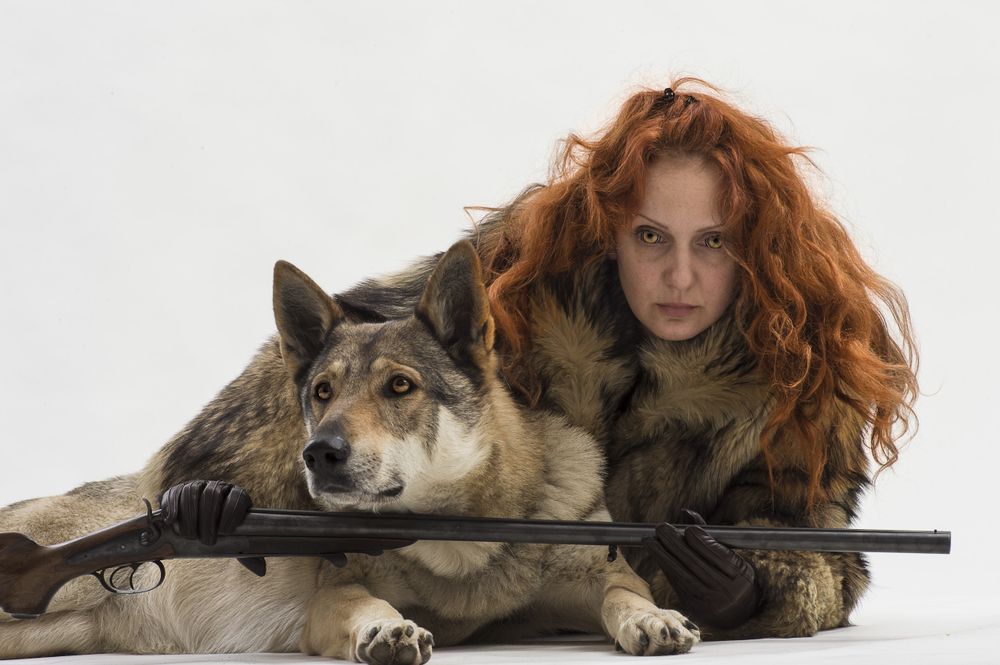 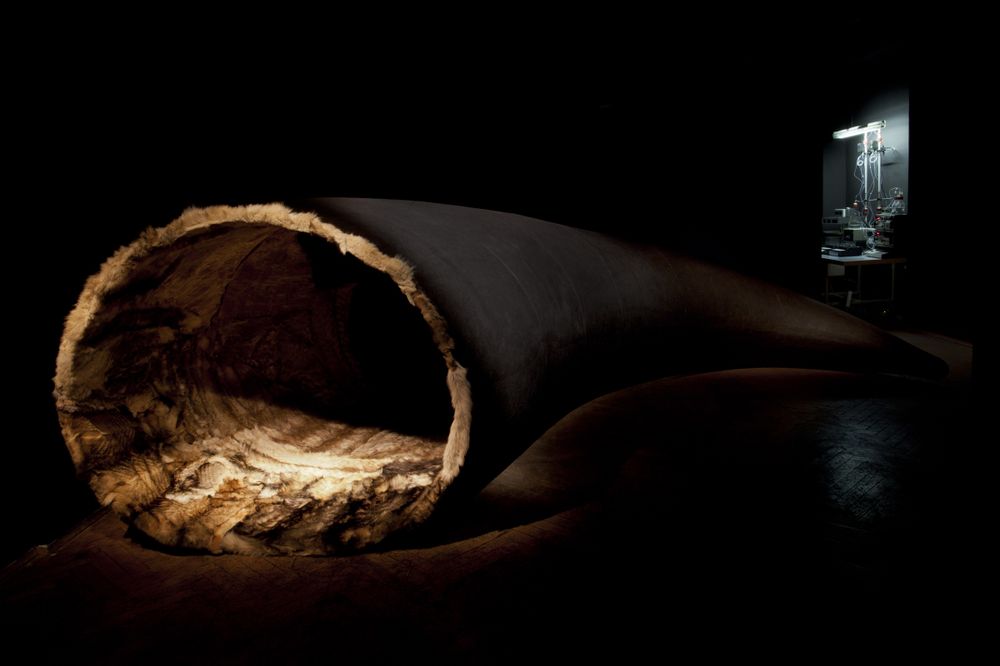 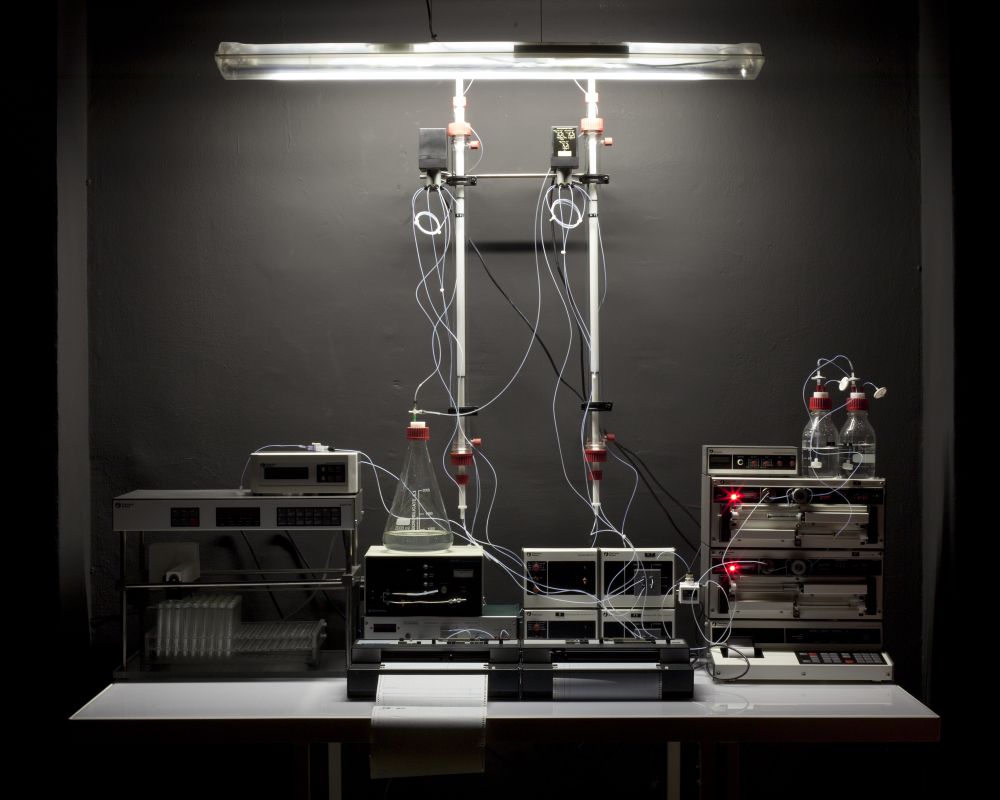 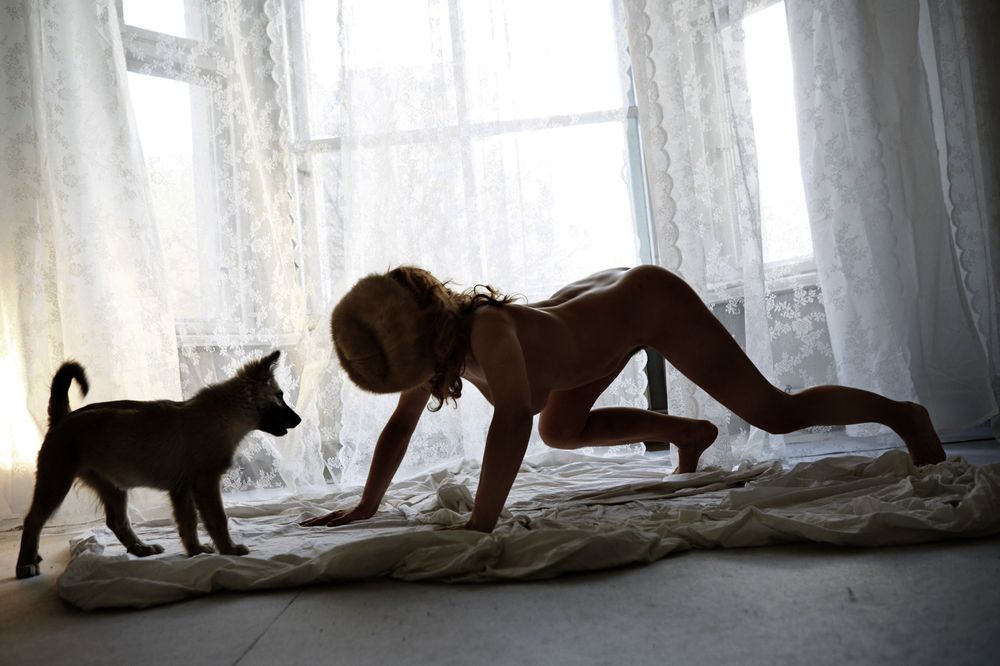 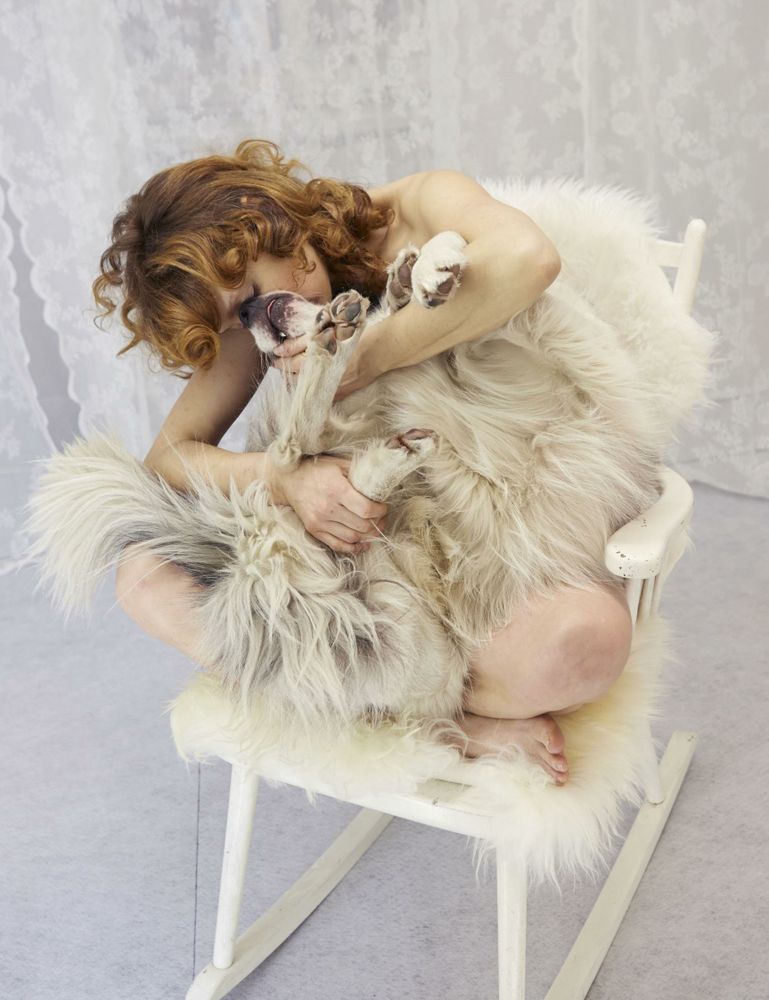 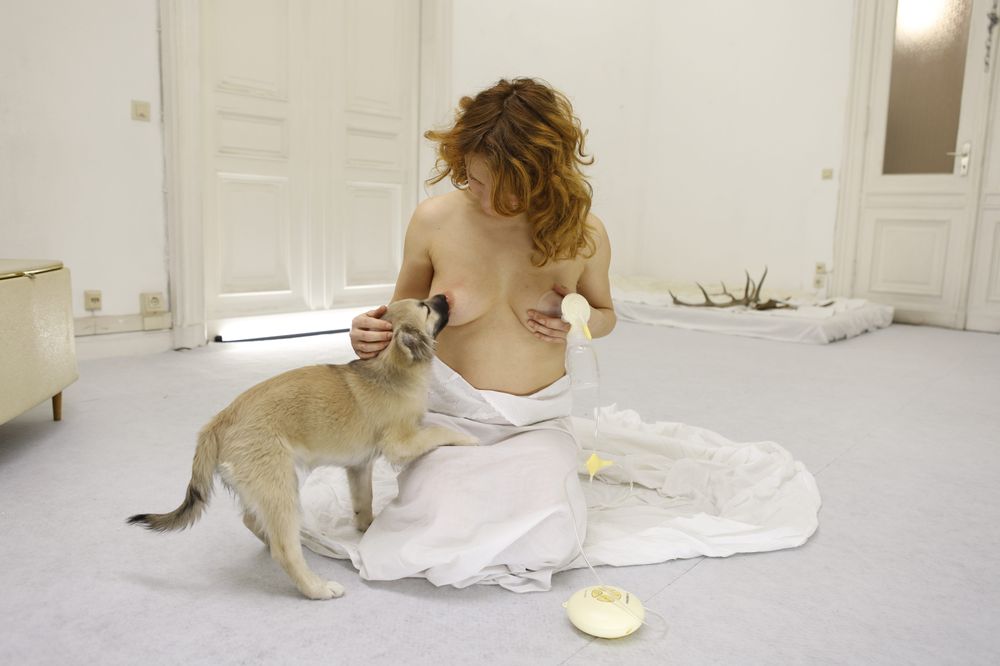 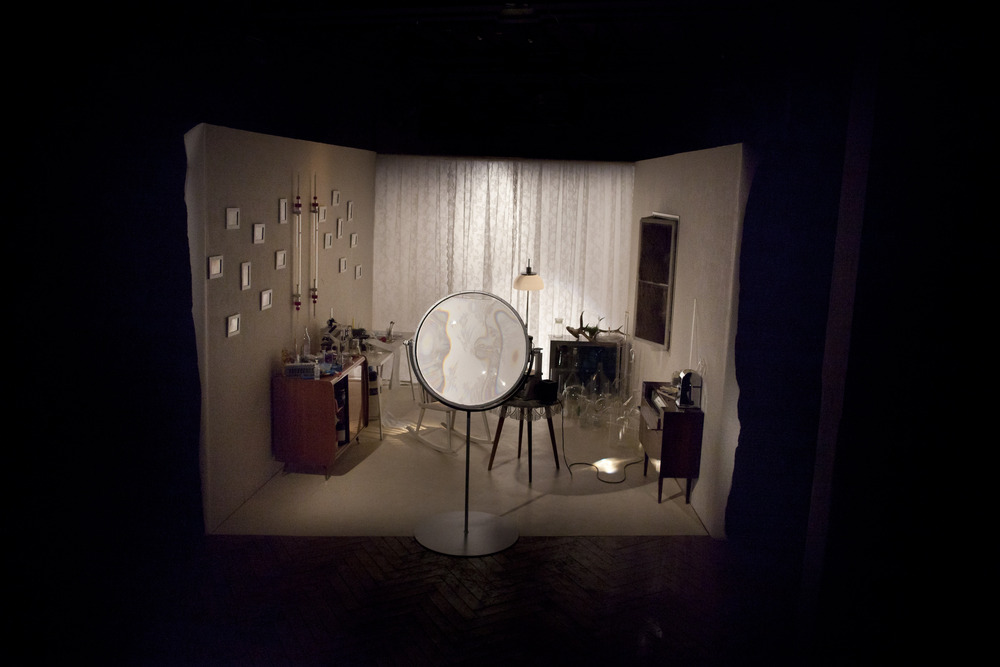 The need to reinvent ourselves with our nonhuman others is investigated in four parts of the *K-9_topology* project, which were carried out between 2014 and 2017. The wolf–human–dog parallel evolution research project, *ECCE CANIS*, focuses on the processes of metabolic pathways that trigger an emotional response that connects humans and dogs and allows them to successfully coexist. The serotonin hormone of Maja Smrekar and Byron, her dog companion, was transformed into an odor, symbolizing the mutual taming of the human and the canine species. The residency at JACANA Wildlife Studios in France focused on the ethology of the wolf. The synergy of interspecies collaboration resulted in a performance called *I HUNT NATURE, AND CULTURE HUNTS ME*. Its symbolical significance was articulated within the context of Smrekar´s emotional childhood memories juxtaposed with the works of Joseph Beuys and Oleg Kulik.

The project *HYBRID FAMILY* was related to the theory of becoming-animal by rethinking the social and ideological instrumentalization of a woman´s body and breastfeeding. Overcoming the classical distinction between private life and political existence, Smrekar felt she needed to perform with her own body and the bodies of her dogs to re-gain their position of power by staging a public performance with a puppy Ada. Her own economy of emotions became a molecular process: during a three-month period of seclusion with her dogs, she stimulated her pituitary glands with systematic breastpumping to release the hormone prolactin and followed a diet rich in galactogogues to promote lactation. A side effect was the increase in oxytocin hormone levels, which led to an increase in empathy and her personal resistance to the cynicism of the zeitgeist. By being pregnant with a meaning, and thus becoming (m)Other, Smrekar was further drawn to explore her “decolonial reproductive freedom in a dangerously troubled multispecies world“ (see Haraway, 2016).1 The myth of humanity, based on its uniqueness, has always excluded some that don’t correspond to the ideal, for example animals with regard to parenthood and gender.

Addressing a new social ecology in the *ARTE_mis* project, Smrekar fused her molecular self with a doggenetically the closest ancestor to the endangered wild wolf. In a biotechnological laboratory, the cell materials of the two carnivorous species were joined in an equal cohabitation relationship. Her denucleated reproductive cell, harvested in an egg retrieval procedure, was inserted with Ada´s fat cell. Since the concept of IVF treatment paraphrases the institution of family as dispositive of all other forms of oppression, Smrekar juxtaposes *ARTE_mis* as a reference “to think beyond humanist limitations in order to embrace the risks that becoming-other-than human brings forth“. (See Braidotti, 2013)2 Homer refers to Artemis, a Greek goddess of the hunt, the wilderness, and childbirth, who is usually depicted with dogs as her companions, as Potnia Theron, a pre-Greek "Mistress of Animals". The hybrid cell is a potential dystopic life scenario that might have more chances of survival on a planet in capitalist ruins.

In the *K-9_topology* opus, Smrekar offers an opportunity to rethink the anthropological machine of representation that aims to adjust our sight and thus our perception: What does "compromising human dignity" mean to us, since not all of us can claim that we have always been human? Or that we are only that.

Maja Smrekar (SI) was born 1978 in Slovenia. In 2005 she graduated from the Sculpture Department of Fine Art and Design Academy in collaboration with the Academy of Theater, Radio, Film and Television in Ljubljana, Slovenia, and has an MA in New Media. In 2010 she led an international festival HAIP10/New Nature, which took place at the Multimedia Centre Cyberpipe in Ljubljana, where she has been active as an artistic director for three years. She won first prize at the Cynetart festival by the European Centre for Arts Hellerau (Dresden/Germany), has received an Honorary Mention at the Ars Electronica Festival (Linz/Austria), and the Golden Bird Award–the national award for special achievements in the field of visual arts by a Liberal Academy (Ljubljana/Slovenia). Maja Smrekar lives and works between Ljubljana (Slovenia) and Berlin (Germany).