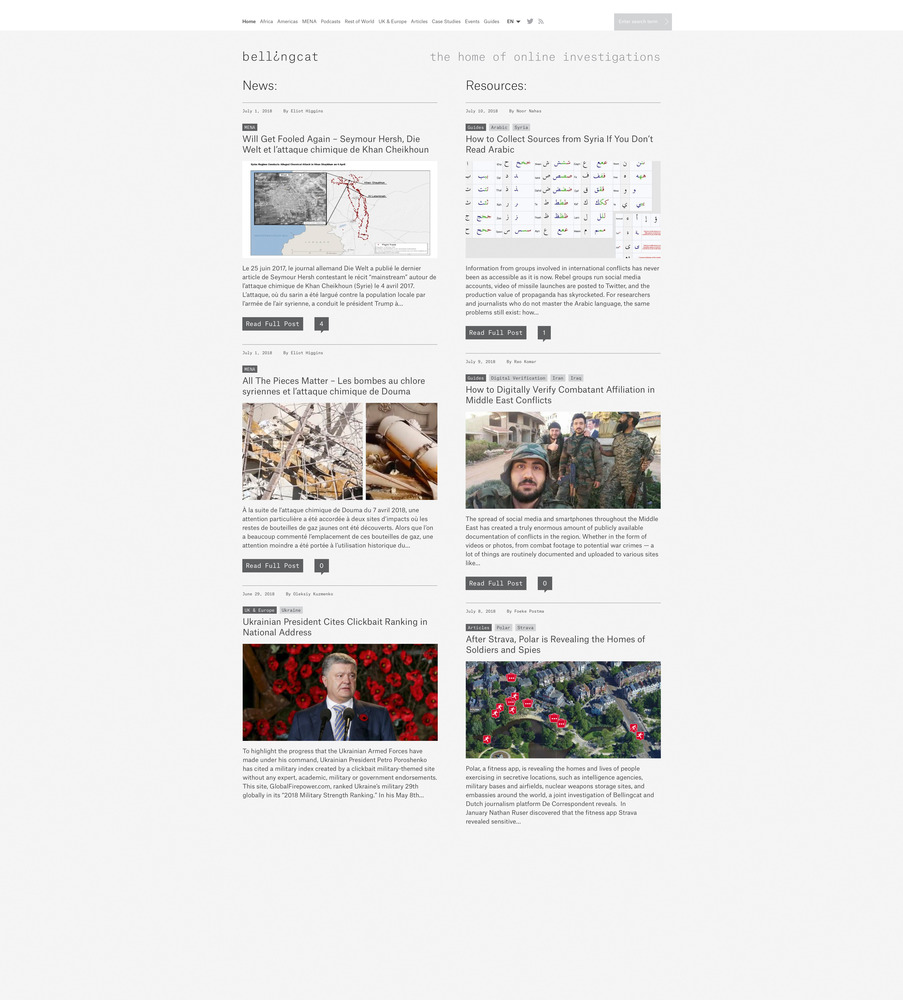 *Bellingcat* was founded in 2014 by Eliot Higgins, the author of the *Brown Moses Blog*, which had previously used open source investigation to examine the conflict in Syria, making key findings on a range of topics, including the use of chemical weapons. In the two years prior to the founding of *Bellingcat*, Eliot Higgins has observed a growing number of individuals and organizations using open source investigation in their own work, and *Bellingcat’s* initial intention was to bring together those individuals and organizations and to provide a platform for them to publish their own work, as well as providing case studies and guides to those who want to learn how to do open source investigations.

A few days after *Bellingcat* was launched, Malaysia Airlines Flight 17, known more commonly as MH17, was shot down over Eastern Ukraine. This began *Bellingcat’s* investigation into the downing of MH17, which has now lasted nearly 4 years, including dozens of articles and reports written about the attack, providing unique and critical information about the attack, and those responsible, and countering false narratives pushed by the Russian government and its supporters.

Key to this work was the community that developed around the incident. Eliot Higgins reached out to individuals who were doing their own open source investigation work on MH17, publishing their work, and eventually invited a small team to collaborate on the investigation after the Joint Investigation Team (JIT) set up to investigate the attack interviewed Eliot Higgins as a witness to the inquiry after learning about his work on MH17. The open source investigations published by *Bellingcat* had been of great interest to the JIT, and since 2014 *Bellingcat* has provided key material to the JIT about the attack.

*Bellingcat* has built a vibrant community that has a strong interest in investigations and verification. What has been noticeable is among the community of Syria-focused organizations there’s actually less connectivity than many people assume, so proactively engaging with those communities has become essential. *Bellingcat’s* new work on Yemen has prioritized building connections among organizations working on Yemen and those organizations who have worked on Syria and have lessons they’ve learned which can be shared with Yemen-focused groups.
Bellingcat was been founded by Eliot Higgins, a nonresident senior fellow for Digital Forensic Research Lab with the Atlantic Council’s Future Europe Program, visiting research associate at King’s College London’s War Studies department, and visiting research fellow at Berkeley School of Law’s Human Rights Center. He is an award winning investigative journalist, and Founder of the Brown Moses Blog and Bellingcat.
Bellingcat’s full time staff is made up of 6 people, focusing on the MENA region, financial investigations in the UK, and Eastern Europe. Bellingcat also has a team of a dozen volunteers who actively participate in investigations on a range of topics. Bellingcat also runs crowdsourcing campaigns that draws on the knowledge of tens of thousands of followers on social media.