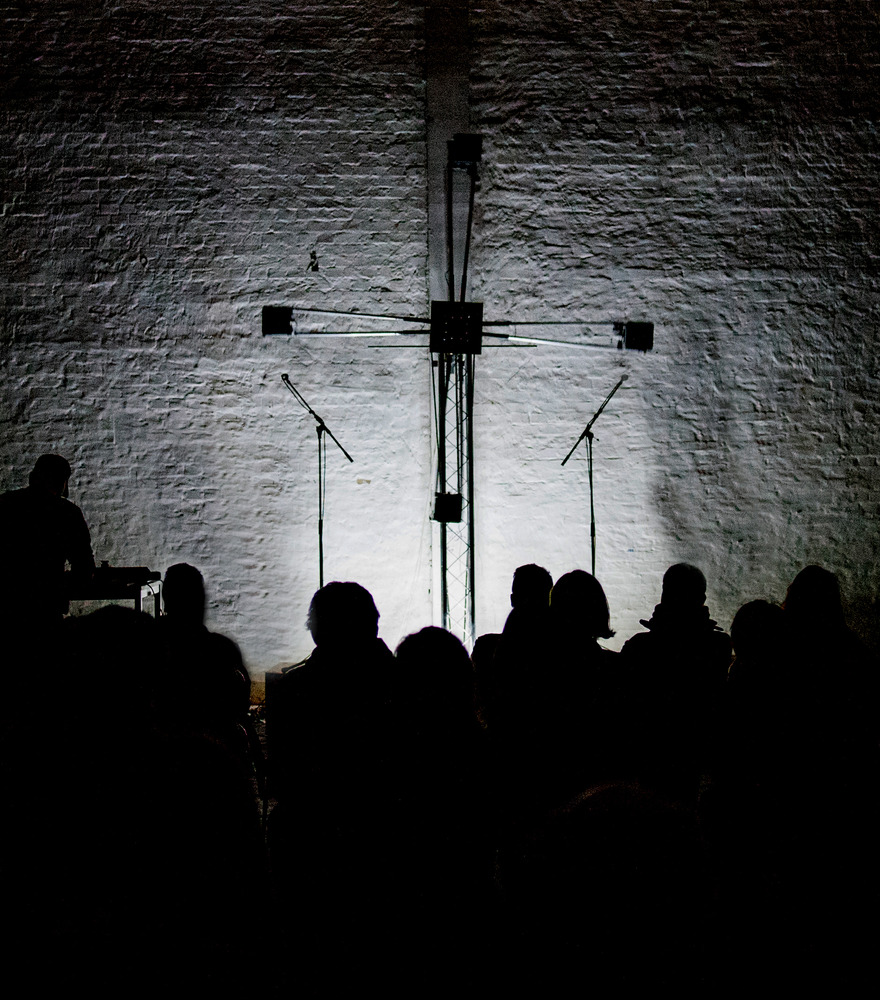 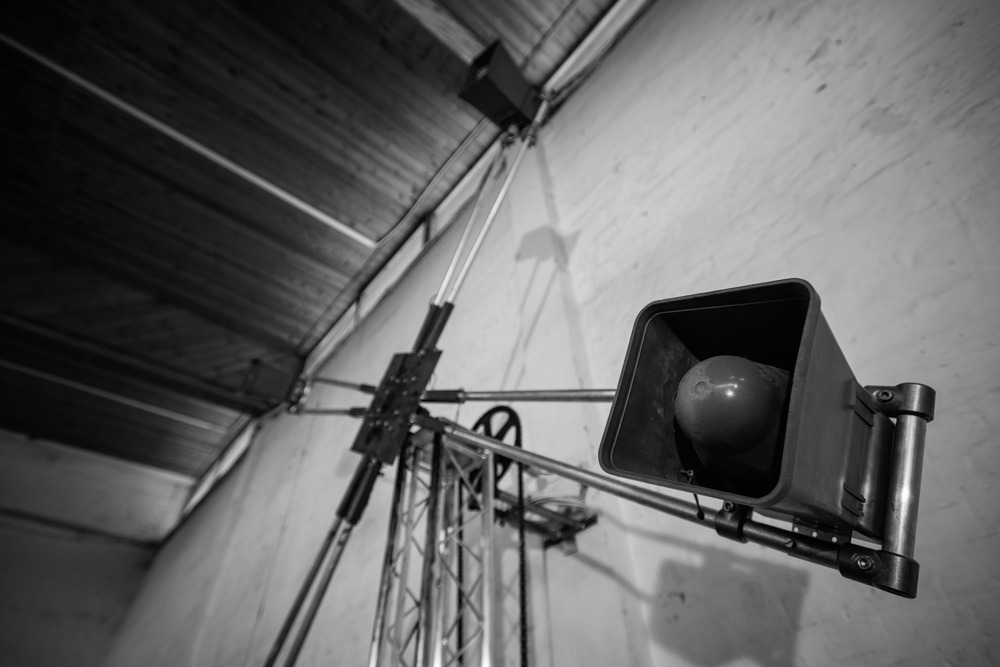 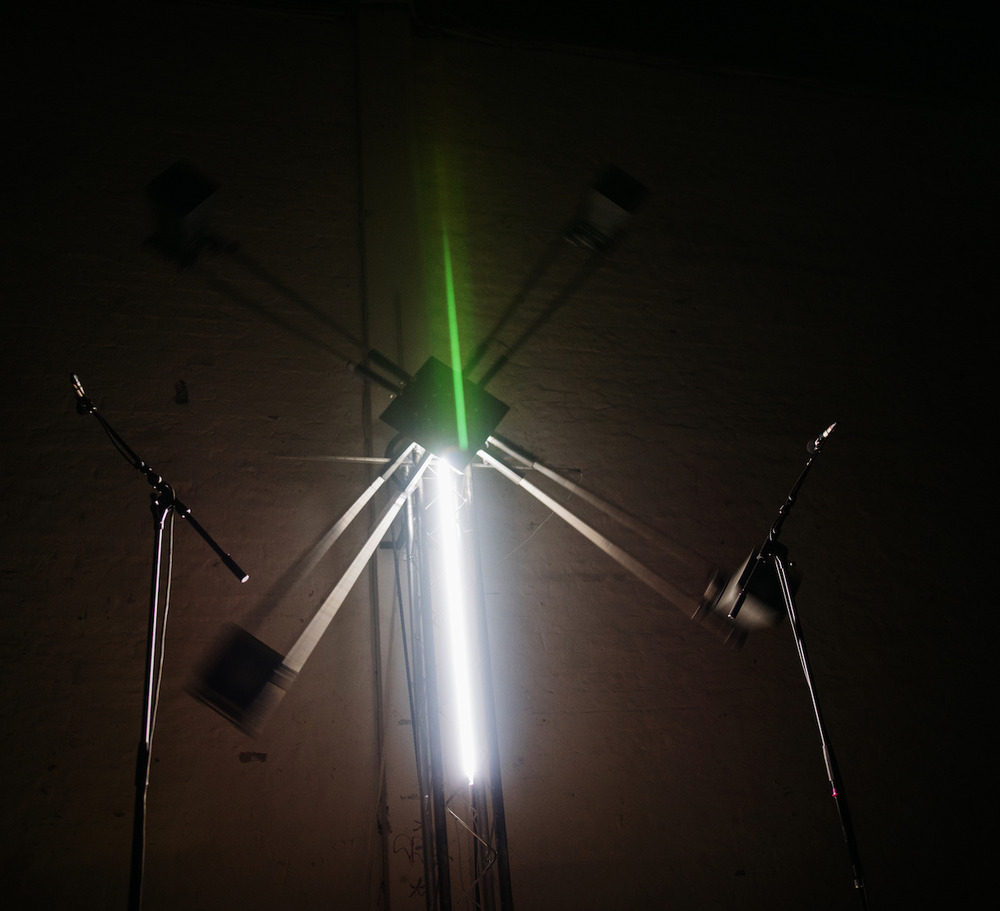 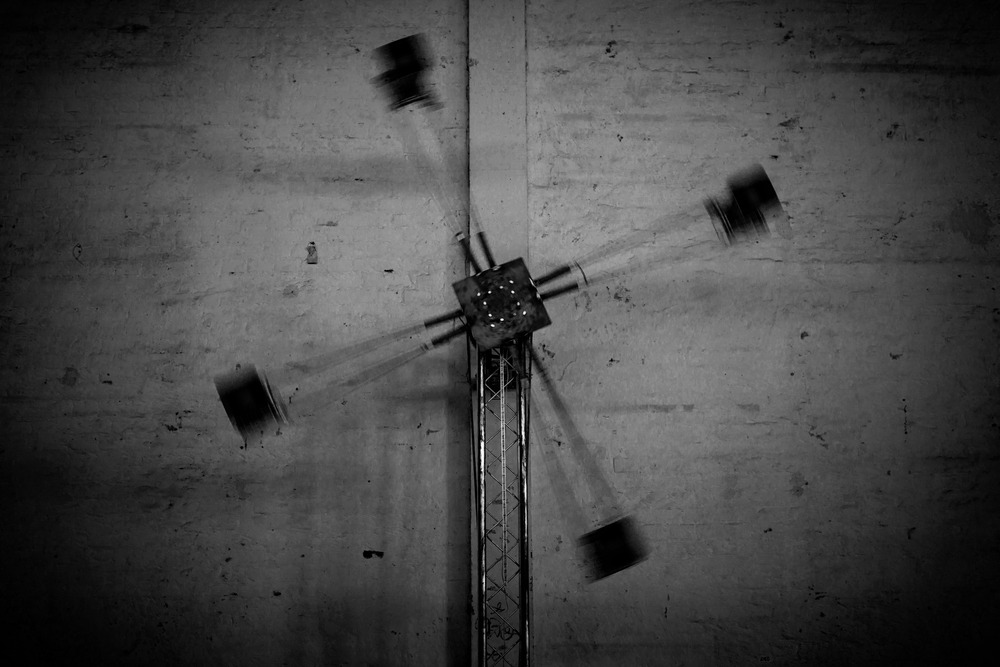 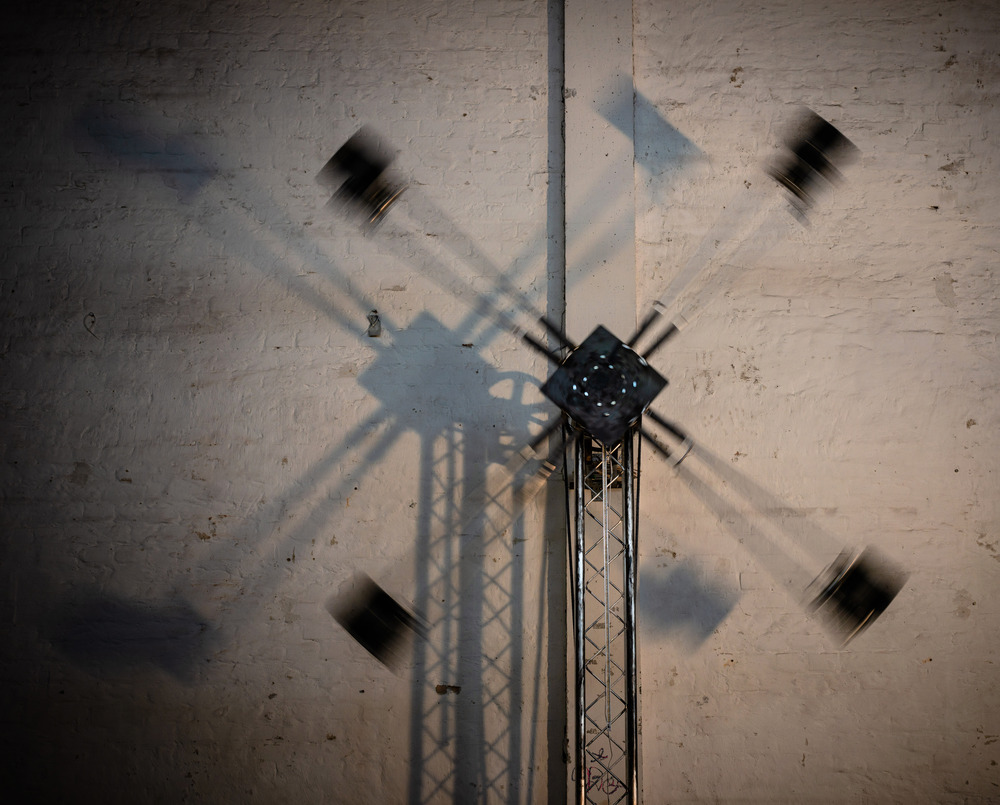 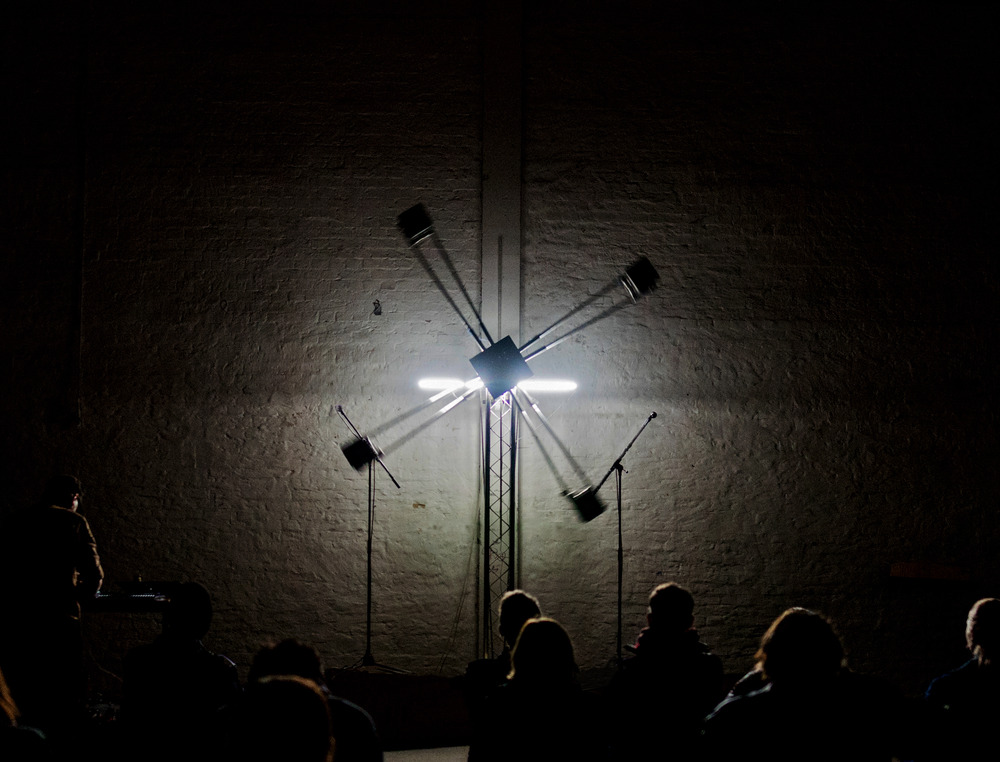 Original: DM_190140_244260_AEC_PRX_2019_torso_03_2724703.jpg | 2684 * 2045px | 4.1 MB | © Igor Ripak
With his kinetic sound-sculpture *TORSO*, Peter Kutin explores how the movement and acceleration of sound-sources can be used from a musical or compositional perspective. With this project, Kutin is referring to the philosopher Paul Virilio’s concept of dromology (the science of speed):

“[Speed] ostensibly perverts the illusory order of normal perception, the order of the arrival of information. What could have seemed simultaneous is diversified and decomposes.”
- Paul Virilio, *The Aesthetics of Disappearance*

For this first version of *TORSO (#1) *, Kutin created a quadrophonic system consisting of four old 100-volt speakers, which he rotates at varying speeds on a 2.5m long horizontal axis. The speakers’ movements are visible, affecting the audience in unusual and confounding ways. Observing the speakers’ circular movements while perceiving the ever-changing composition and how it develops over time combines to create a wholly unorthodox listening experience. For the structure of the object, Kutin drew inspiration from a klopotec—a variety of bird-scaring windmill found in central Europe.
For sound-sources, Kutin on one hand provokes simple feedback patterns via static microphones that are positioned on pre-determined spots in front of the speakers’ circular path. The sonic-characteristics of the emitted feedback is directly changed and modulated by the speed of rotation. Kutin additionally created and designed original sounds especially for this unique setup, in order to maximize its psychoacoustic effects. The composed sonic-material is based on abstractions of the human voice—as performed by the soprano singer, Johanna Baader—as a reference to the human-made environment behind—as well as a counterpoint towards—the technical facade.
With these main ingredients, Kutin either performs live or pre-composes for an installation-setup—in both cases he develops site-specific compositions for which the speed of rotation, the acceleration, and the amount of feedback become the key parameters to work with. Partially the sounds emitted by the *TORSO* are picked up with microphones and sent into a PA system that is set up around the audience in order to translate, or seemingly magnify, the sonic movements to reach heightened dramaturgic variations and phases of increased density. Sounds and feedback travel within the space in an unfamiliar, and yet strange and multidimensional manner. It seems as if the sonic movements can be perceived both horizontally and vertically at once. Flanked by meticulously arranged LED lights that flicker, pulsate, and spin, *TORSO* reaches lucid and hallucinatory heights. Visitors have described the concert experience as like exposure to an expanded Dream-machine—referring to the influential stroboscopic flicker device first developed by artist Brion Gysin and William S. Burroughs. With *TORSO#1*, Kutin takes this concept to a different level as he explores how rotating sound can influence and manipulate our way of listening, and enhance the acoustics of the performance space.
Realizing this first version of *TORSO* was a starting point for an on-going compositional cycle. A new version is actually in creation as part of the Society for Arts and Technology’s (SAT Montreal) immersive works residency program. A fulldome version for which Kutin will cooperate with the video-artist Patrik Lechner will be premiered in the Satosphere, a unique concert space in Montréal, in 2020.

Text: Tristan Bath
Concept, composition, realization: Peter Kutin
Technical support and realization: Mathias Lenz
Soprano singer: Johanna Sophia Baader
Further technical support: Oskar Kutin, Johannes Fritzer, Gratis Kaiserin
Catalogue - Text: Tristan Bath
Images: TORSO#1 © David Višnjić, Igor Ripak
Portrait of Peter Kutin © Peter Mayr
Supported by SKE Fonds and BKA
Peter Kutin (AT) is a Vienna based producer/composer. He works with sound. Kutin’s live-performances or installations hold a physical and psychological impact that throws you as much off balance as they embrace you. They have been exhibited, commissioned, performed or screened at various music- / film-festivals and venues across the globe. He has written and developed music / sound for film, theatre, performance, contemporary dance and radio plays. Besides that he directed experimental short-films and wrote / composed works for radio. He has received several awards of which some are considered more and some less important. Kutin is a founding member of the label Ventil-Records, Velak (platform for experimental music) and is a co-organizer of the RealDeal Festival.