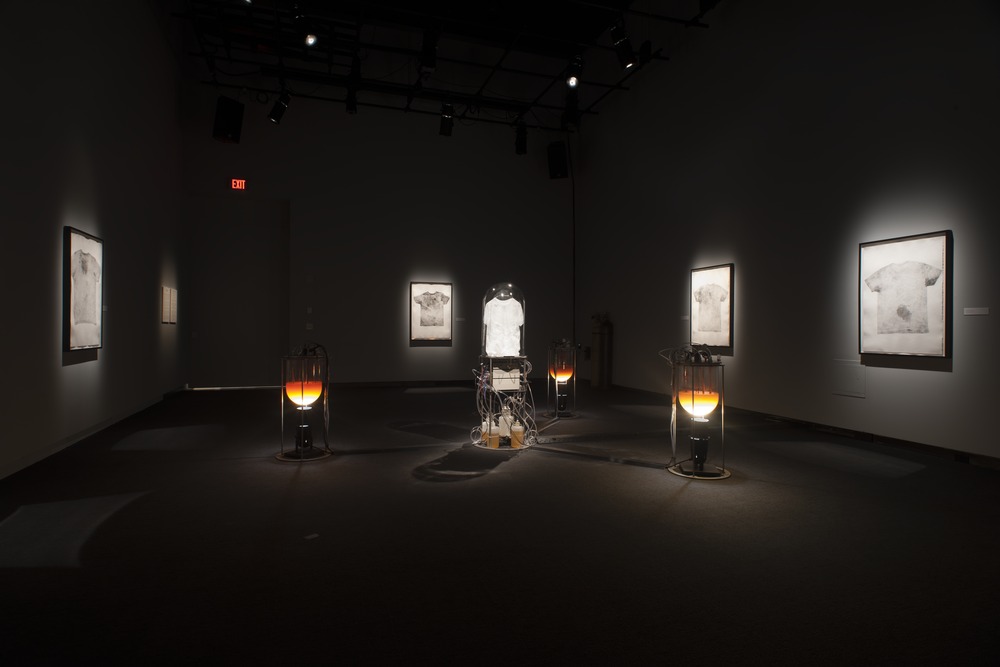 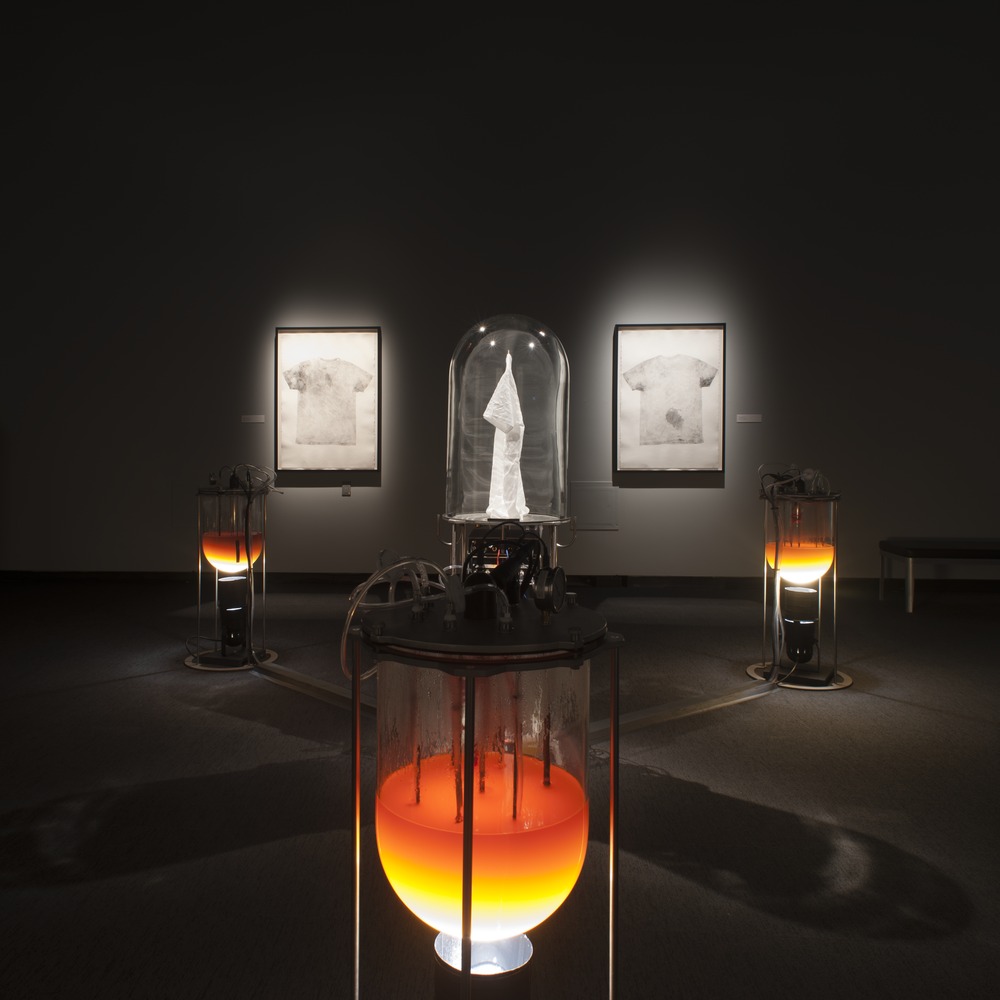 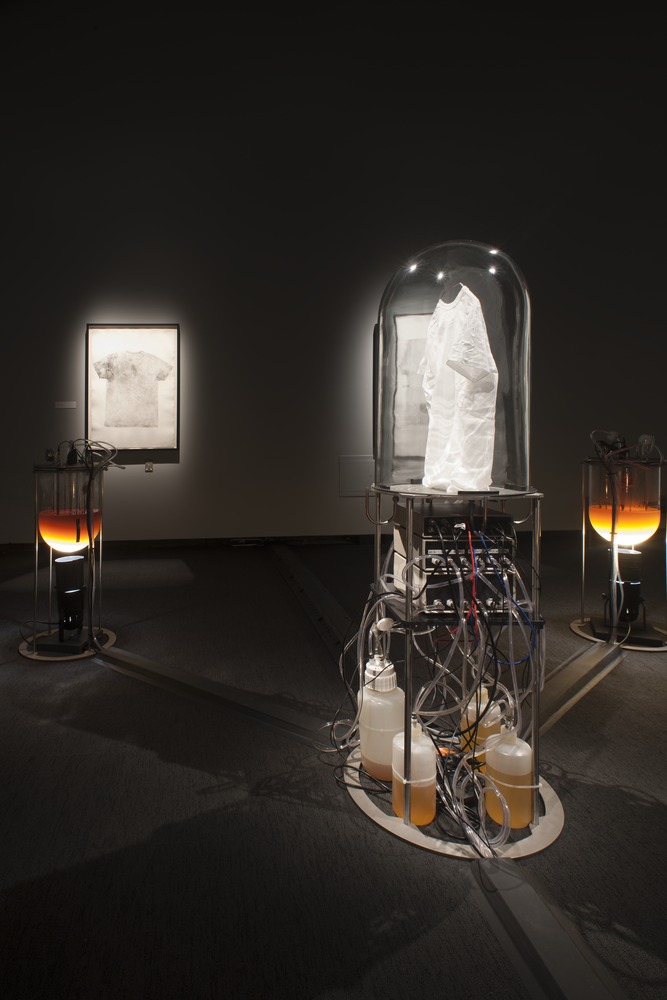 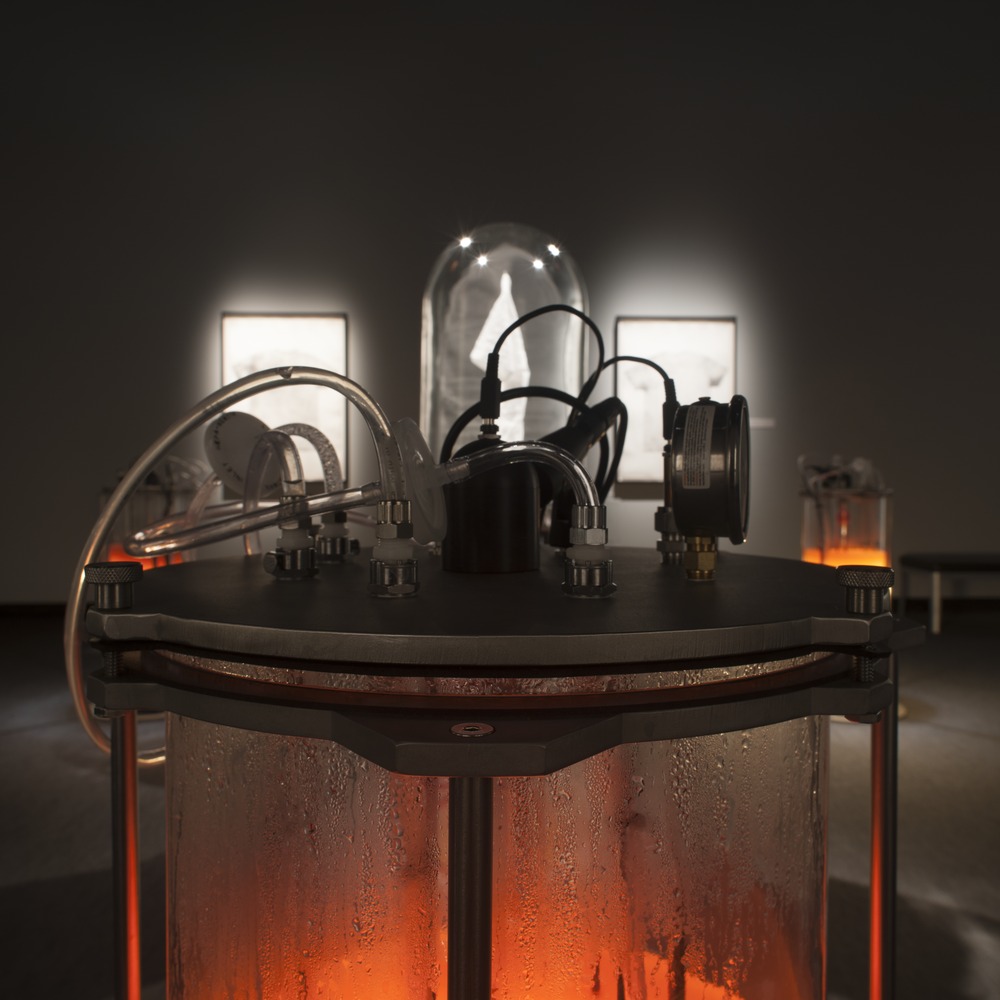 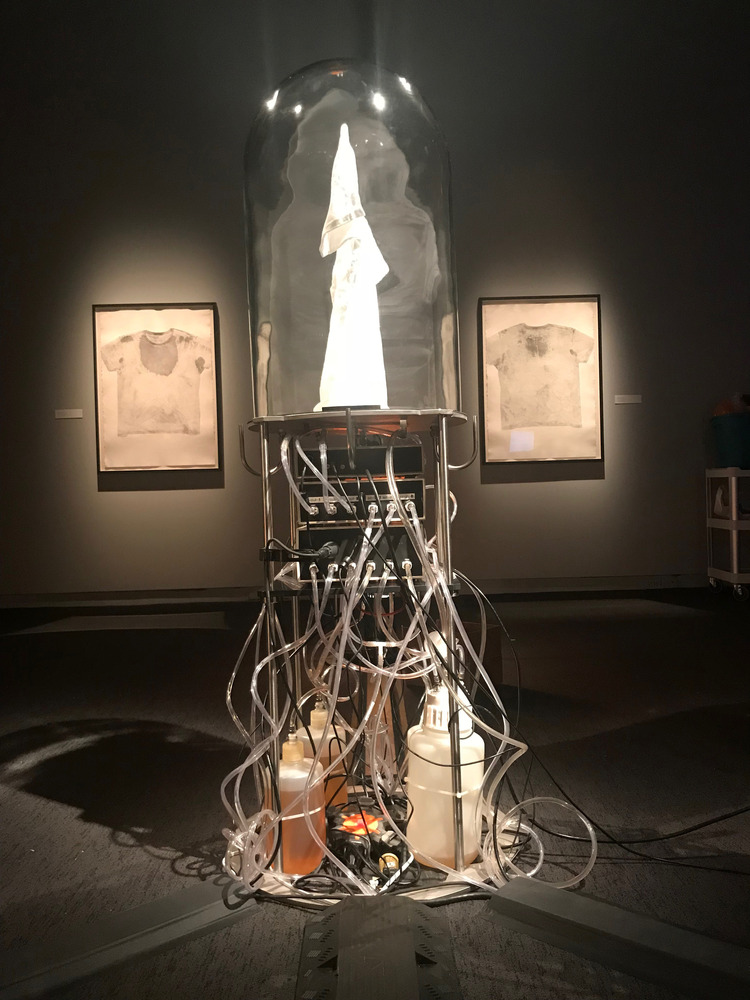 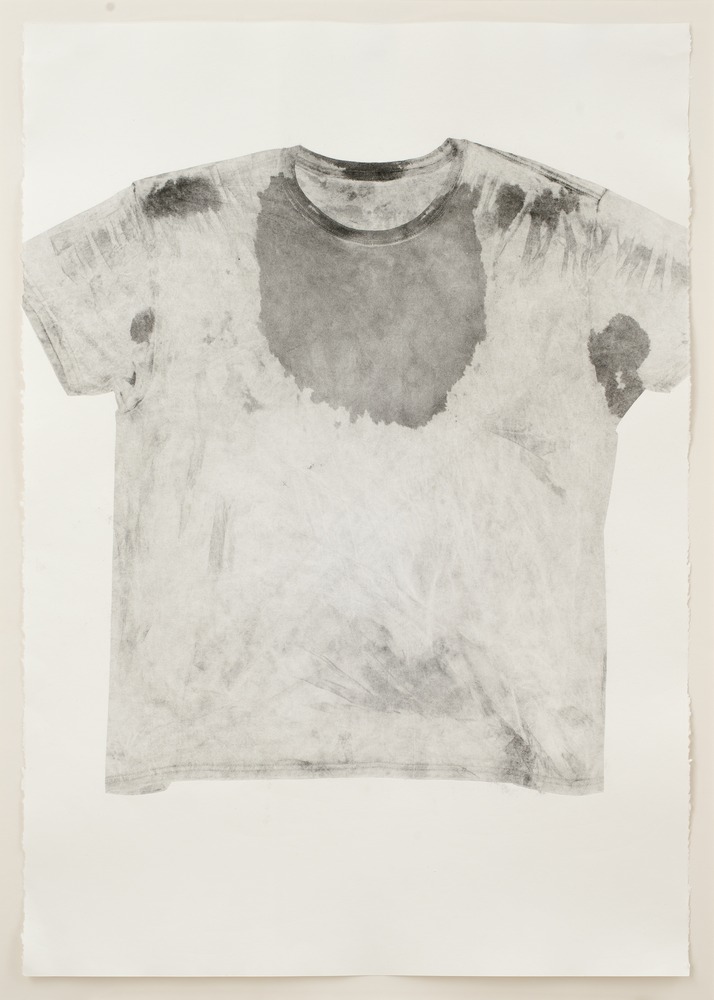 Original: labor-print-johnson.tif | 3583 * 5018px | 51.5 MB | photo Tullis Johnson
What does exploitation smell like? *Labor* is a dynamic, self-regulating art installation that re-creates the scent of people exerting themselves under stressful conditions. There are, however, no people involved in making the smell—it is created by bacteria propagating in the three bioreactors in the artwork. Each bioreactor incubates a unique species of human skin bacteria responsible for the primary scent of sweating bodies: Staphylococcus epidermidis, Corynebacterium xerosis, and Propionibacterium avidum. As these bacteria metabolize sugars and fats, they create the distinct smells of human exertion, stress, and anxiety. Their scents combine in the central chamber in which a sweatshop icon, a wearer-less white T-shirt, is infused as the scents disseminate out, intensifying throughout the exhibition.

Process
I initiated this project at the Biofilia laboratory in Helsinki. There I isolated Staph epidermidis, which produces a mild scent, and Propioni bacteria, which produces funky, acrid odors. I isolated them by covering my armpits in sterile pads in a day that included mild exercise, white-collar labor writing proposals, and scheduling meetings. Cultivating skin bacteria in vitro is difficult as these strains best survive in the complex ecosystem of the human epidermis. At the Coalesce Center for Biological Art in Buffalo, I’ve built incubation equipment to investigate at which metabolic stages, and under which conditions these organisms are the most fragrant.

In *Labor*, I have not engineered genes into microbial production strains (as a synthetic biology approach would entail), but rather adjusted incubation conditions to fit these organisms of the human skin to maximize their particular scents. The three custom bioreactors in the installation are monitored by a Raspberry Pi-based automation system that incorporates stirrers, biosensors, pumps, heaters, and valves to automate these conditions in a continuous production model. It is important to me that this “labor” is performed live, it is a living process, and its product is produced in excess of that which could be created by human toil.

The installation also includes several sweat-stain-transfer prints—visual evidence of exertion captured by a novel production method. Moist, freshly soiled shirts are dusted with charcoal and pressed between paper at high pressures, which infuses the paper surface with an embossed pattern of intimate sweat. In the first installation, each T-shirt was worn by a university student paid at the prevailing wage. The sweat-stain-transfer technique produces evidential traces of individual excretion.

Concept
The idea of what exactly makes up a person is again under the microscope, not just for scientists, but for culture at large. For centuries, we have been debating who gets to be considered a person and when: it is a question that dominates political discourse of the last few centuries because of the connection to labor and liberation in the post-renaissance world.

*Labor* reflects upon our changing understanding of what we are. Microbes in and on the human body vastly outnumber human cells and they help regulate many of our bodily processes, from digestive and immune systems to emotional and physiological responses like sweating. Our microbiota is integral to who and what we are, and complicates any simplistic sense of self. Likewise, the smell of the perspiring body is not just a human scent, unless we are willing to redefine what we mean by ‘human.’

The *Labor* project also reflects upon an industrial shift from human and machine labor to increasingly pervasive forms of microbial manufacturing. Today, microbes produce a wide range of products, including enzymes, foods, feedstocks, fuels, and pharmaceuticals. They literally live to work. These new industrial activities point to a deepening of the exploitation of life and living processes: the design, engineering, management, and commodification of life itself. In *Labor*, the microorganisms ironically produce the scent of sweat, not as a vulgar ‘bi-product’ of production, like in factories of the 19th and 20th centuries, but as a nostalgic ‘end-product’.

As audiences contemplate clues within the installation, they will hopefully ponder perverse aspects of contemporary production like: life inseparable from labor, product and produce conflated, biology a subfield of technology, and “man” omitted from manufacturing.
Scientific Collaborator: Solon Morse
Scientific Advisor: Gerald Koudelka, University at Buffalo
Fabrication: Tom Gruenauer, University at Buffalo
Support received from:
The New York State Council on the Arts Electronic Media and Film Program
Burchfield-Penny Art Gallery, Buffalo, NY
Biofilia, Aalto University, Helsinki
Coalesce Center for Biological Art, Humanities Institute, and Genome Environment and Microbiome Community of Excellence at the University at Buffalo
Paul Vanouse (US) is an artist and professor of Art at the University at Buffalo, NY, where he is the founding director of the Coalesce Center for Biological Art. Interdisciplinarity and impassioned amateurism guide his art practice. His bio-media and interactive cinema projects have been exhibited in over 25 countries and widely across the US. Recent solo exhibitions include: Burchfield-Penny Gallery in Buffalo (2019), Esther Klein Gallery in Philadelphia (2016), Beall Center at UC Irvine (2013), Muffathalle in Munich (2012), Schering Foundation in Berlin (2011), and Kapelica Gallery in Ljubljana (2011). Other venues have included Walker Art Center in Minneapolis, New Museum in New York, Museo Nacional in Buenos Aires, Haus der Kulturen der Welt in Berlin, ZKM in Karlsrhue, and Albright-Knox in Buffalo. Vanouse’s work has been funded by Renew Media/Rockefeller Foundation, Creative Capital Foundation, National Endowment for the Arts, New York State Council on the Arts, New York Foundation for the Arts, Pennsylvania Council on the Arts, Sun Microsystems, and the National Science Foundation. He has received awards at festivals including Prix ARS Electronica in Linz, Austria (2010, 2017) and Vida, Art and Artificial Life competition in Madrid, Spain (2002, 2011). He has an MFA from Carnegie Mellon University.