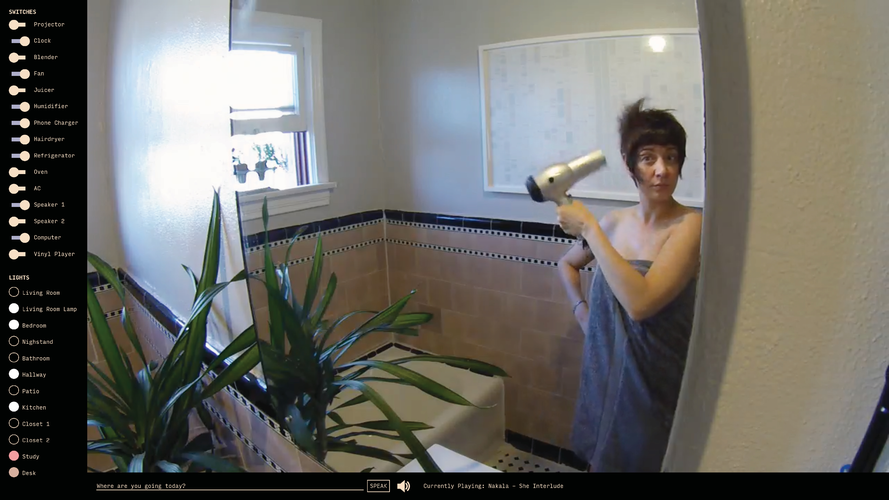 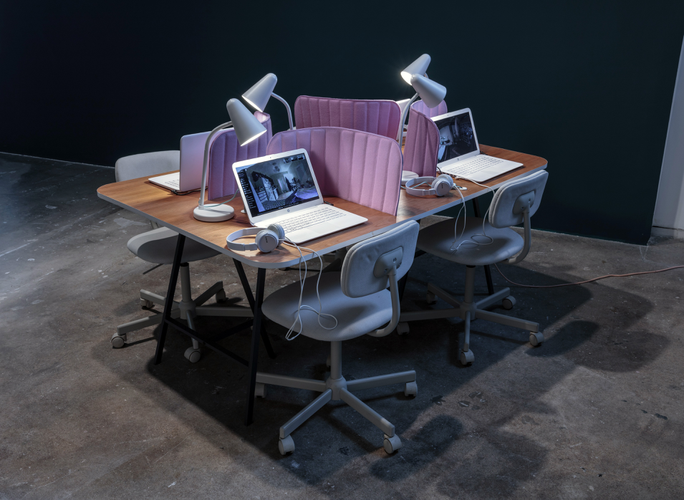 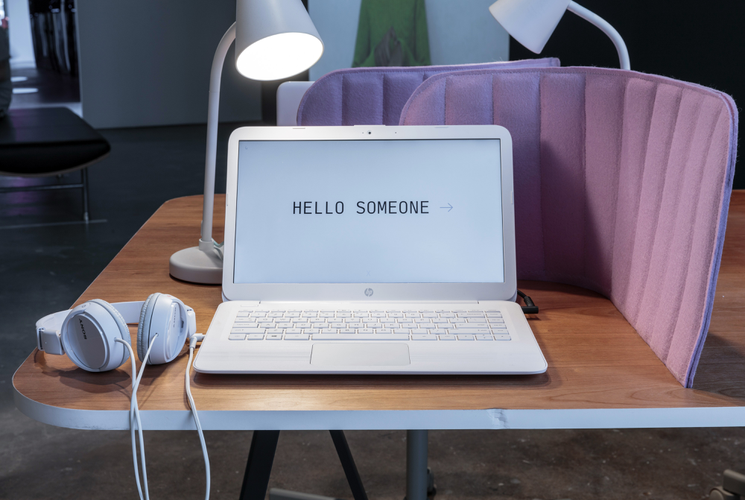 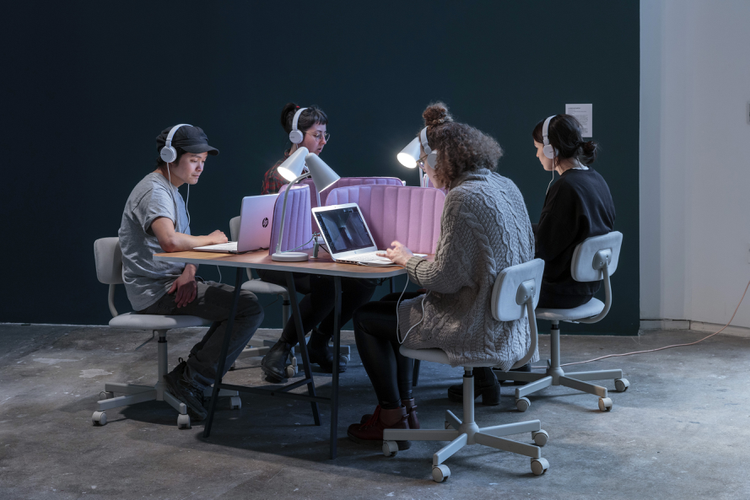 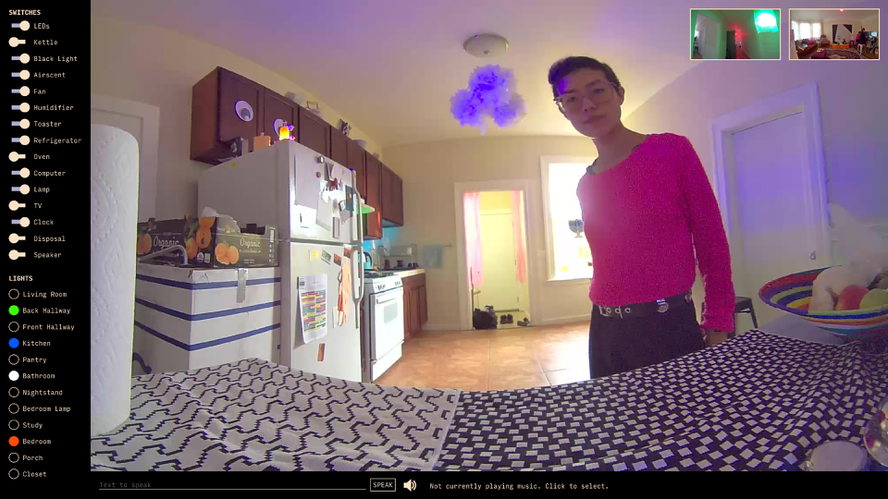 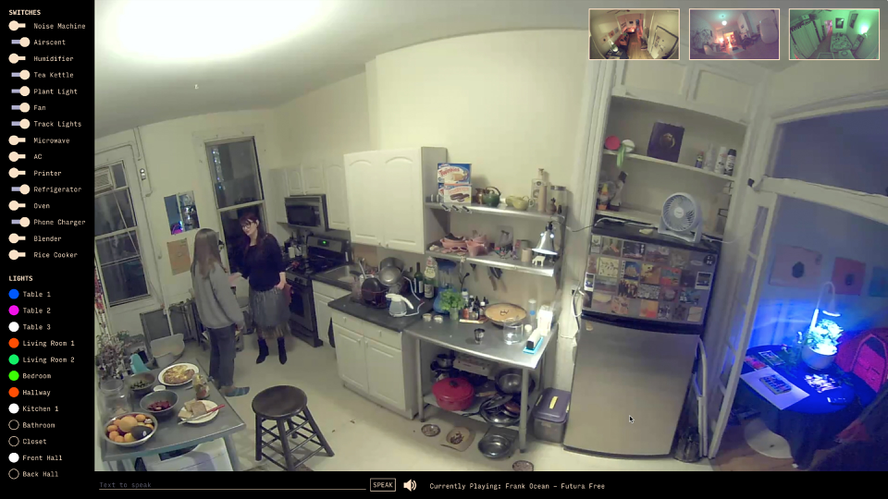 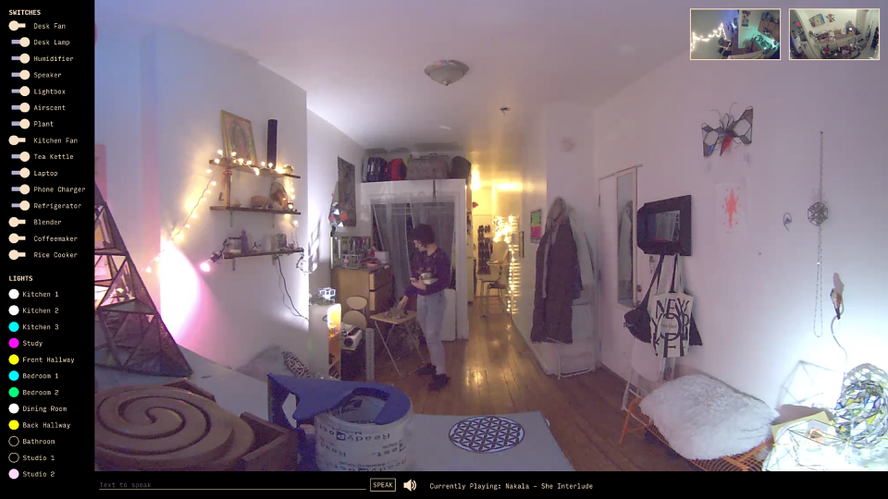 Original: SOMEONE5LaurenLeeMcCarthy.jpg | 3840 * 3840px | 2.0 MB
Upon entering the gallery, visitors encounter a command center that resembles a cross between a call center and WeWork coworking space, featuring four computer stations. Each computer looks into one of four participant homes, installed with custom-designed smart devices, including cameras, microphones, switches, lights, and appliances. Visitors are invited to take on the role of a human Amazon Alexa.

They may hear smart home occupants call out for "Someone"--prompting them to step in as their home automation assistant and respond to their needs. They can peek into the four homes via the laptops, watch over them, and remotely control the devices in their homes. The first version of this installation was a live remote intelligence portal into four homes across the United States that took place over a two-month period.

We're sold smart devices that outfit our homes with surveillance cameras, sensors, and automated control, offering us convenience at the cost of loss of privacy and control over our lives and homes. We're meant to think these slick plastic pieces of technology are about utility, but the space they invade is personal. The home is the place where we are first watched over, first socialized, first cared for. How does it feel to have this role assumed by artificial intelligence? Our home is the first site of cultural education-- it's where we learn to be a person. By allowing these devices in, we outsource the formation of our identity to a virtual assistant whose values are programmed by a small, homogenous group of developers. It is hard to imagine any living person with a personality like Alexa or Siri. AI assistants lack the flaws and inconsistencies of human personalities. Right now, virtual assistants are designed to accommodate the most common and universal needs. Imagine if instead they attended to our particular, obscure needs and desires. They could probe beyond what we expect of these technologies, into the types of help we might feel able and comfortable to ask only of technology. This points to possibilities that are both exciting and worrying. This installation does not impose a judgment but creates space for the viewers and inhabitants to form their own opinions.

While designing the project, I spent a lot of time thinking about the question, "If I were an AI, what would I be like?" I aimed to create SOMEONE as an entity that felt human but could also function like a system. Rather than speaking to people directly, visitors used a text-to- speech interface to invoke a synthesized voice. Rather than feeling like a guest to be accommodated in the home, they could more easily integrate into the infrastructure of the environment.

The devices were based on research into existing smart home and IoT devices, while exploring more human and imaginative forms and functionalities they may take on. The custom device objects incorporate cameras, microphones, and sensors, and address the needs of the inhabitants by functioning as smart switches, lights, locks, environment adjusters, small appliances, and more surreal mechanisms of control. Custom software, built with node.js, runs on a Raspberry Pi computer that serves as the central hub for the system, connecting all the devices and enabling them to be interactive and remotely controlled.

By substituting humans for AI, the role of virtual assistant is re-contextualized. As inhabitants call out for "Someone," invoking visitors as intelligence, the dynamic between audience and performer is complicated. Installed simultaneously in multiple homes across the country, we're challenged to consider the scale of the work, and the even more expansive, networked systems that structure society. SOMEONE is a meditation on the smart home, the tensions between intimacy vs privacy, convenience vs agency, and the role of human labor in the future of automation.
Artist: Lauren Lee McCarthy
Software and hardware development: Harvey Moon, Josh Billions
Interface software: Lauren Lee McCarthy
Furniture design collaboration and fabrication: Lela Barclay de Tolly
Smart home participant collaborators: Valeria Haedo, Adelle Lin, Amanda McDonald Crowley, Ksenya Samarskaya
Lauren Lee McCarthy (US) is an LA-based artist examining social relationships in the midst of surveillance, automation, and algorithmic living. She is the creator of p5.js, an open source JavaScript platform that aims to make creative expression and coding on the web accessible and inclusive. Lauren's work has been exhibited internationally, including the Barbican Centre, Fotomuseum Winterthur, SIGGRAPH, IDFA DocLab, Science Gallery Dublin, Seoul Museum of Art, and the Japan Media Arts Festival. She's a 2020 Sundance New Frontier Fellow, 2019 Creative Capital Grantee, and has previously held residencies with Sundance New Frontiers, Eyebeam, CMU STUDIO for Creative Inquiry, Autodesk, and Ars Electronica, among others. She's the recipient of grants from the Knight Foundation, the Online News Association, Mozilla Foundation, and Google AMI.
Links: https://lauren-mccarthy.com/SOMEONE