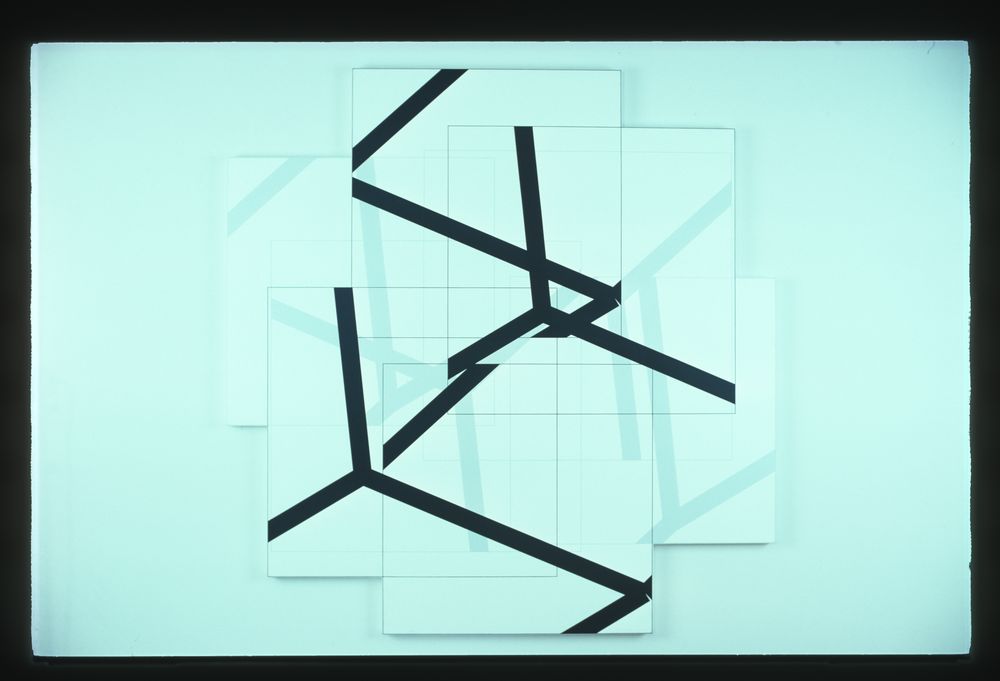 Original: ENT_9032,2_AEC_PRX_1990_p411a_1399725.tif | 4425 * 3017px | 42.9 MB
“P-411-A” by Manfred Mohr is an algorithmic composition. As the result of a process the actual image is created with the help of parametric rules.
In my artistic development I did not have the typical constructivist background. I was an action painter and a jazz musician. Through a development of my consciousness, I detached myself from spontaneous expressions and turned myself to a more constructivist and, therefore, geometric expression (1964).
Beyond this, my art developed into an algorythmic art in which inventing rules(algorythms) are the starting point and basis of my research. The “compositional rules” are not necessarily based on already imaginable forms, but on abstract and systematic processes. My rules are parametric rules, which means that at certain points in the process, conditions have to be set for which,in some cases, random choices can be implemented.
In my work, similar to a journey, only the starting point and a theoretical destination are known. What happens during the journey is often unexpected and surprising. Even though my work process is rational and systematic, as well ascontrolled by visual criteria at all times, it is always open to surprises. With such parametric rules, the actual image is created as the result of aprocess.
Since 1973, in my research, I have been concentrating on fracturing the symmetry of a cube, without questioning the structure of the cube as a "system." This disturbance or disintegration of symmetry is the basic generator of new constructions and relationships. What I am interested in are the two-dimensional signs (“êtres graphiques”) resulting from the projection of the lines of a cube. I describe them as unstable signs because they evoke visual unrest.
My art is not a mathematical art, but an expression of my artistic experiences. I invent rules which reflect my thinking and feelings. These algorithms can become very complex, that is to say complicated and difficult to survey. In order to master this problem, the use of a computer is necessary in my work. Only in this way is it possible to cover as many rules as necessary withoutlosing control. It is inevitable that the results - that is my images - are not visible at first glance. The information is deeply buried, and a certain participation is demanded on the part of the spectator; a willingness to question the material.
In principal, all my work can be verified and rationally understood. However, this does not mean that there is no room for associations and imagination. On the contrary, the rational part of my work is limited, basically to it's production.What one experiences, understands, learns, dreams ... or interprets, because of the presence of the work of art, rests solely on the mind of the spectator. A work of art is only a starting point, a principle of order, an artist's statement, intended to provoke the spectator to continue his / her investigations. (Manfred Mohr)

P-453 AD/4, 1990
Hw: PDP 11/23
Sw: Own
Manfred Mohr was born on June 8, 1938, in Pforzheim, Germany. He studied art at the Kunst- und Werkschule Pforzheim. After having worked as a jazz musician, he got into computer science. Now he lives and works as an independent artist in New York. Mohr has received several awards, e.g. at the 10th Biennale Ljubljana 1973 and the World Print Competition '73 in San Francisco. He had numerous group exhibitions all around Europe and the U.S.A. as weil as several one-man-exhibitions, including shows in the Museum of Modern Art, Paris, 1971, the Art Research Center, Kansas City, 1983, the Wilhelm Hack Museum, Ludwigshafen, 1 98 7, the Reuchlin Museum, Pforzheim, 1 988, and the Prakapas Gallery, New York, 1989.